The Center for South Asia, University of California Berkeley and Foundation for Democratic Reforms in India jointly organized a seminar (September 27, 2008) on Indian Democracy where the Director General of Police of Chhattisgarh was a speaker.

As part of protest actions in solidarity with Dr Binayak Sen and in opposition to the Chhattisgarh Special Public Security Act (CSPSA), a letter from over a hundred academics to Mr Vishwa Ranjan, the Director-General of Police, Chhattisgarh, reached him in Berkeley, along with copies of earlier petitions from citizens of India and the world, a letter circulated by alumni of Christian Medical College (CMC) Vellore (alma mater of Dr. Binayak Sen), and a letter signed by 22 Nobel Laureates and released on May 14, 2008, one year after Dr. Sen’s arrest and imprisonment.

Dipti Bhatnagar spoke at the panel and screened a slideshow on behalf of all the organizations protesting the DGP.  Fifty students and community members distributed literature, silently carried signs, and sternly interrogated the DGP during the question and answer session.  Nandini Sundar, Justice Srikrishna, Rajiv Dhavan and Sunil Kumar also spoke.

Over 135 academic faculty, including professors from Berkeley and 6 other campuses of the University of California, and from India, signed this letter in just three days. 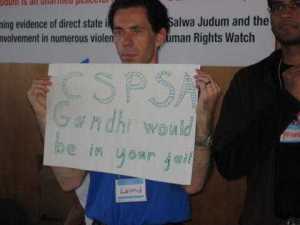 The DGP himself “signed” the postcard to the Prime Minister demanding release of Binayak Sen.   In fact, he wrote “you should send this letter to the government, not to the police.”   It is within his power as Chief of Police to withdraw the falsified charges against Dr. Binayak Sen and take responsibility for the “mistake” he admitted regarding arrest of Ajay TG.

This account was sent by Aravinda Pillalamarri on behalf of:

16 thoughts on ““Gandhi would be in your jail”: Protests against CSPSA at Berkeley”