This is a guest post by Naeem, an artist friend. The post is a cull from a conversation regarding the recent ban in Switzerland imposed on building minarets.

In a vote that displayed a widespread anxiety about Islam and undermined the country’s reputation for religious tolerance, the Swiss on Sunday overwhelmingly imposed a national ban on the construction of minarets, the prayer towers of mosques, in a referendum drawn up by the far right and opposed by the government. The referendum passed with 57.5 percent of the vote and in 22 of Switzerland’s 26 cantons.

Naeem: And now I’m thinking of the photographer I met, a few hours before the opening of the show “Im/Possible Communities” at Zurich Shedhalle. We sat in the caretaria with hot tea and free chocolates, and he told me “This ban vote will never pass. Not in Switzerland.” So much for that comfort.

But what about this poster. It is as if, as I said elsewhere, the right wing now has the best graphic designers?!

Sandy: Concerning the poster – as far as is can see all the critique is already in the mainstream media. It is a typical 20/30’es design – colourwise and by form. And it works very well, to downscale the opponent to a (dark) symbol– shadows, rocket-like minarets, flooding Switzerland. And most likely the posters will be more distributed by the media than actually hung in the streets?

N: Actually it was in many subway stations in Zurich when I was there. Right opposite was an ad for ALI KEBAP airlines. With a Turkish man in a fez holding kebab-spike in one hand, and flying the plane in the other. Travel there, but don’t let them come here. 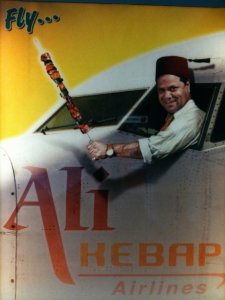 S: Hmm, there are 4 minarets in Switzerland at this time – 2 more are about to be built. The ones wearing a tschador like this are saudis or emirates people who spend lots of money in Switzerland. Have you seen the anti minaret game – > http://www.minarett-attack.ch/

This battle is somehow already lost. The campaign from the SVP was successful, they managed to polarise quite well. And of course this is not about the actual minarets, not even the law which might be kicked by EU law in the end anyway. So this is already in a quite defensive setting at the first place, preaching to the converted…

I like the idea to enter it via the design question. Why dont we invite for a poster workshop. I think one has to step out of this setting of critique structure which already is existing and all over the place. One has to find the gaps in the discourse to intervene with impact. Else it will stay a symbolic autopilot in some way. Maybe fair enough for the art world, but not enough.