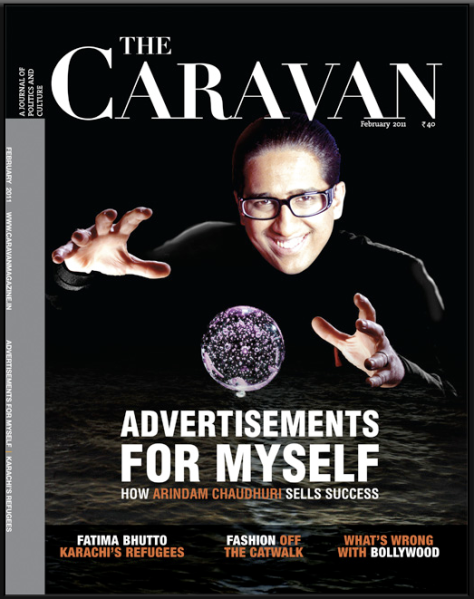 When I read The Caravan‘s cover story on Arindam Chaudhuri some months ago, I wondered when he was suing them. And he’s done it! While a court injunction has made The Caravan remove the story from theire wesbite, you can read it thanks to Google cache. No wonder Chaudhuri’s sued Google India as well! Given below is the full text of the press release put out by The Caravan. Unlike when Chaudhuri took on bloggers in 2005, I’m glad it is an organisation with the resources to fight the case and take him head on – not to say that requires some spine as well. After you’re done reading the release below, entertain yourself with all the Arindam jokes on Twitter.

IIPM’s Rs500-million lawsuit against The Caravan
In response to our February profile of Arindam Chaudhuri, the IIPM has sued The Caravan. Here’s why we’re fighting the suit.

The Indian Institute of Planning and Management (IIPM), whose director, Arindam Chaudhuri, was the subject of the cover story of our February 2011 issue, has filed a lawsuit against The Caravan, citing “grave harassment and injury”. The article, titled “Sweet Smell of Success: How Arindam Chaudhuri Made a Fortune Off the Aspirations—and Insecurities—of India’s Middle Classes”, was written by Siddhartha Deb, a contributing editor at The Caravan and an accomplished writer and university professor based in New York. Deb’s profile of Arindam Chaudhuri, which shows how Chaudhuri built an image for himself and how he runs his educational institution, has been critically praised for both its thorough reporting and its spirit of evenhandedness. In the weeks that followed its initial publication, in print and on The Caravan’s website, the extensive article was widely referenced, commented on, and shared by readers.

The suit against The Caravan, which seeks huge damages, has been filed not in Delhi, where both the IIPM and the magazine’s publisher, Delhi Press, are based, but 2,200 km away in Silchar, Assam, 300 km from Guwahati, Assam’s capital. The IIPM filed the case at the Court of Civil Judge in Silchar district, through one Kishorendu Gupta, who operates Gupta Electrical Engineers in a Silchar suburb, and is the first plaintiff. IIPM is the second plaintiff.

In addition to The Caravan and its proprietors, the suit charges Siddhartha Deb, Penguin (the publisher of the upcoming book by Deb in which the article is a chapter), and Google India (which, the suit alleges, has been “publishing, distributing, giving coverage, circulating, blogging the defamatory, libelous and slanderous articles”).

The civil court in Silchar granted the IIPM a preliminary injunction, enjoining Delhi Press to remove the article in question from their website, ex-parte, without any pre-hearing notice.

Kishorendu Gupta is a commissioned agent who works for the IIPM on a contractual basis. Although Gupta is called a counselor, a contract between Gupta and IIPM shows Gupta is a recruitment agent who has commercial interest and is paid for his service on a commission basis. IIPM’s contract with Gupta states:

“for number of students enrolled between 1 to 24, the compensation would be

75,000 per student …[and] for anyone who crosses the 25 students mark, the compensation would be

90,000 per student…[and] for anyone who crosses the 50 student mark, the compensation would be

1,25,000 per student” (From the agreement submitted by the plaintiffs in the court).

It is learnt that the IIPM has filed similar lawsuits against certain other publishers, also in Silchar, Assam, rather than in Delhi.

In 2005, the IIPM filed a case against Rashmi Bansal, a blogger and editor of Just Another Magazine (JAM), who published an article in print and online questioning many of the claims made by the IIPM in its brochures and advertisements, which highlighted that the IIPM had not been accredited by any Indian agency such as AICTE, UGC or under other state acts. The IIPM filed a case against Bansal from Silchar, Assam, even though she runs a small independent outfit based in Mumbai. The IIPM managed to get an ex-parte order from the court, forcing Bansal to remove the article from the website. The IIPM also filed for damages.

In 2009, Careers360 magazine, published by Maheshwar Peri, who is also the publisher of Outlook magazine, carried an article titled “IIPM – Best only in claims?” investigating the authenticity of many of the claims made by the IIPM in their advertisements. The magazine’s investigation revealed that the IIPM claimed that its students were eligible for MBA degrees from IMI, Belgium, but that NVAO, the accreditation organisation of Netherlands and Flanders (Belgium), did not recognise IMI. Also it reported that following a local agitation against the opening of a new campus in Dehradun, the state government of Uttarakhand had asked the Uttarakhand Technical University to conduct an enquiry on the activities of the IIPM, with which IIPM did not co-operate. The investigations revealed that IIPM could not in any circumstances award valid MBA/BBA degrees or conduct such courses in the state of Uttarakhand. The IIPM, again, filed a case against the magazine and the publisher in Silchar, and obtained ex-parte restraint against them. The IIPM also filed a criminal case against Maheshwar Peri from Uttarakhand, which was subsequently quashed by the High Court. The cases against Rashmi Bansal and Careers360 are both still underway at the Silchar courts, as the IIPM seems to be interested in dragging the matter out now that their purpose has been served by obtaining interim restraints.

The Caravan’s profile of Arindam Chaudhuri was the most thorough article published to date on the subject. The 10,000-word story was the result of several months of work by Siddhartha Deb, whose exhaustive reporting included interviews with Arindam Chaudhuri himself and several of his close associates who spoke openly about the IIPM and its critics, coverage of Chaudhuri’s public functions, and an account of considerable time spent on the IIPM campus. The piece is distinguished by both its detailed research and its refined literary style.

The Caravan intends to fight this suit because we believe that we must defend the right of journalists to report on controversial subjects or persons without undue fear of legal intimidation from powerful entities or organisations that seek to insulate themselves from criticism. Delhi Press, the publisher of The Caravan and many popular titles like Sarita, Woman’s Era,Grihshobha and Mukta, has time and again been at the forefront of defending the right to freedom of speech and freedom of press during its 70 years of publishing history. On account of the bold anti-authoritarian and anti-religious obscurantist articles published in its leading socio-political magazine in Hindi, Sarita, the group has successfully fought all attempts of legal intimidation over the years.

If the IIPM can demonstrate that any errors of fact have been made, The Caravan will print a correction in the magazine as well as on its website. But the vast majority of the “falsehoods” cited in the legal suit are not based on matters of fact, and the objections merely reflect the discomfort of the IIPM with the language employed to describe the facts.

The Civil Court at Silchar, in its order granting the injunction against the magazine, has noted:

“Defendants had written article making false imputations against IIPM Institute with false and concocted facts only to cause damage to the reputations, Goodwill, education activities of IIPM institute. The said magazine carries and morphid image of Mr. Arindam Choudhury-Dean of the Centre for Economic Research and Advance studies of IIPM saying him as a magician/soothsayer in an attempt to portray him as a trickster and falsely stated that Mr. Arindam Choudhury has a reputation as a fraud, scamster and ‘Jhony come lately’ in order to malign and defame the dean of IIPM and create a negative public image of Mr. Arindam Choudhury”.

In their petition, the plaintiffs have raised an objection to the article’s statement that placements had always been a pressing problem for the IIPM graduates. They have also raised an exception to the author’s claim, based on interviews with Arindam Chaudhuri himself, that almost 90 percent of Planman employees, including faculty members, have been former graduates of the IIPM.

The author had raised questions about the revenue and size of the company to Arindam Chaudhuri and his associates, but these went unanswered. The article states this, along with the fact that while the IIPM spent over

300 million on advertising in 2006, it paid no income tax that year or the previous.

The sum and substance of the petition is that The Caravan has published a false, incorrect, defamatory and libelous article and has made false imputations against the IIPM, which, the petition says, the author and editors of The Caravan knew to be false, and that these were made with the intention to defame the IIPM institute as well as its councilors like Kishorendu Gupta. While we reserve our right to respond to the allegations during the course of legal proceedings, it is interesting to note the following charges in particular:

“The magazine carries a morphed image of Mr. Arindam Chaudhari, Dean Centre for Economic Research and Advance Studies of IIPM, showing him as a magician/soothsayer in a manner which clearly is an attempt to portray him as a trickster.”“The present campus at Satbari is also not in the city’s outskirts nor the road leading to it is dusty. Moreover, the works “proprietor”, “small”, “run of the mill”, “outskirts of Delhi” and “the road is dusty” have been used by the Defendants with the aim to malign and defame the heads of IIPM as well as the IIPM institute.”

As stated before, The Caravan as a respectable publication stands by what has been published, which is a true and accurate account of the IIPM as experienced by the author. But the suit that has been filed leads us to believe that the IIPM does not appear to have any desire to correct the record: instead it aims to prevent any publication of material that paints the IIPM in a light it does not approve of.

The suit, in order to substantiate the charges, offers a long list of students, rent receipts from the Indian Tuberculosis Society, an agreement with Plaintiff No 1 Kishorendu Gupta, which runs into 25 clauses of commercial nature, and various newspaper cuttings.

The Caravan will continue to keep its readers updated with the proceedings in the court so that they know the truth about both the veracity of the statements made in the article and the arguments of the IIPM and Kishorendu Gupta. For the benefit of the public, news of the court proceedings will be published by Delhi Press in its 30 magazines in nine languages, which together have a readership of over 30 million people.

The Caravan Editors and Publishers