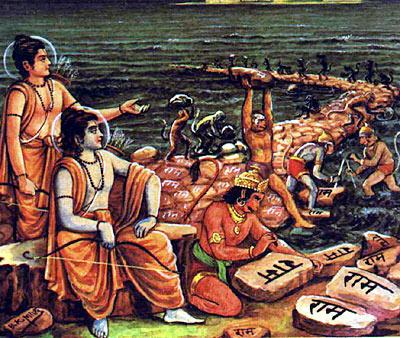 The Government of India again seems to be in the mood of going ahead with the Sethusamudram Shipping Canal Project that would reduce travel time for ships around coastal Tamil Nadu and Sri Lanka, and bring economic advantages to both countries. The project involves breaking limestone shoals that some regard to be the remains of the mythological Ram Setu. The controversy is an old one. In 2007, I had interviewed Hindutva ideologue Bharatendu Prakash Singhal, who was particularly vocal against the ‘destruction’ of the limestone shoals. Singhal is a former Rajya Sabha MP and a retired Indian Police Service officer. The bits from the interview that were directly about the Ram Setu controversy had appeared in Tehelka, but Singhal was more interested in talking about “mind, body and soul” than about Ram Setu. Here are the unpublished bits – though I had put them on my blog back then. Every word was transcribed faithfully from the recorded audio.

If there are alternatives, why do they want to demolish the ‘bridge’?
Simply because America is out – have you not been watching the way places of Hindu faith and shraddha have been denigrated!

But why?
Do you know what their academy of religion in America gives out? That the trunk of ganesha is like a phallus. For them phallus is visible everywhere. In India it has been called shiv ling. Ling is phallus? What is ling? Ling is the operational part of the particular thing. And what is Mahadev? Mahakaal! That is also Mahadev. Mahakaal ka ling kya hain? Time. Time consumes everything. There was an attempt by Brahma and Vishnu, ki dekhey iskay ling kahan hain. Kahin aadi aur ant hain kya? Toh Brahma ko kahan tum upar jaon hum neechay jaatein hain. And then if we come back with results then we will compare notes. So Vishnu went down, down, down, down, down, down, down and came back after that. Brahma also went up, up, up, up and came back. Usnay kahan ki Vishnu aadi mila? Kahan nahin. Tumko mila? Ant mila? Haan, haan mil gaya. So what is the proof? He said, he had already fixed up tulsi, the most revered flora, and gau, the most revered fauna. Yeh do they toh unsay saksh liya, and they said ki haan ant hain. It was discovered that it was all totally false. Gau ka mukh nahi puchta, aur tulsi ghar main nahi rakh saktay. You keep it outside in the angan. Ab Brahma ka mandir nahi milta. He is not worshipped the way Vishnu is. So that is the operational part, the ling, which is Mahakaal. Mahakaal ka ling kya hain? Time. So if they don’t want to understand that and make their own interpretations…

But why is the UPA government doing this?
Sonia Gandhi is reason enough. Shankaracharya’s humiliation and other things… there is a whole series of charges.

But she insisted the ASI withdraw that affidavit…
Anybody who wants to denigrate another religion, I call him a Christian. You must find out Ambika Soni’s religion. But I deem her a Christian anyway. Because only Christians have come out with voluminous literature denigrating our deities and sons. They call Ramakrishna Paramhans a sodomite. Sodomite!

Sodomite!
Yes, and Vivekananda as a catamite! This book has been written in protest against what they have been preaching there. I’ll just read out this part (reads from the blurb of the book Invading the Sacred: An Analysis of Hinduism Studies in America by Krishnan Ramaswamy, Antonio de Nicolas and Aditi Banerjee): India, once a major civilisation and economic power that suffered centuries of decline, is now newly resurgent in business, geopolitics and culture. However, a powerful counterforce within the American Academy is systematically undermining core icons and ideals of Indic Culture and thought. For instance, scholars of this counterforce have disparaged the Bhagavad-Gita as “a dishonest book”; declared Ganesha’s trunk a “limp phallus”; classified Devi as the “mother with a penis” and Shiva as “a notorious womanizer” who incites violence in India; pronounced Sri Ramakrishna a pedophile who sexually molested the young Swami Vivekananda; condemned Indian mothers as being less loving of their children than white women; and interpreted the bindi as a drop of menstrual fluid and the “ha” in sacred mantras as a woman’s sound during orgasm.

Why is it all so sexual?
Yeah, they are obsessed with sex!  Because they are the followers of Freud for whom sex was the highest motivator. When you just vanish, the only real element is the soul. And you take the body as the final, material world, as Marx takes it, Freud took it, or Darwin – he also doesn’t believe in the soul! I consider them the three villains of the whole mankind. Because they divorce man from the only reality that exists in him.

Surprisingly the Muslims are not producing hate literature like this.
They don’t have those brains. They don’t have those brains. They have their sword. They know that once they are in a majority like Kashmir, they’ll either convert or finish off. So they believe in brute force. Unko itna dimag bhi nahin hain. Aur jisnay bhi analysis karnay ki koshish kari, whichever Muslim went deep into this, he became lover of Indian philosophy. Yeh hamari itni vaishvik hain philosophy, so universal and devoted to just human beings. Whoever goes into the depth of it, he becomes a slave of it. You may be a very devout Muslim, please continue your devotion, as Vivekanand says. He was a devout Hindu. What did he say? I want every Christian to be a devout Christian, he said, every Muslim to be a devout Muslim, every Hindu to be a devout Hindu. He never said that everyone should become a Hindu. The RSS and VHP don’t say everyone should be a Hindu. You can have a difference of opinion when they say that after all the Mughals didn’t bring any women, so after all they were all Hindus, their mothers were Hindus, from them the progeny of Muslims came. They are if not full then half Hindus. Aap yeh keh do ki aap Muslim Hindu ho. They are known as Hindis when they go to Madina for Haj. Wahan Hindi kehlatay ho toh yahan Hindi kehlanay main kya takleef hain tumko? There should be an identity with the soil.