Loud voices singing the alphabet ring clear through the otherwise silent morning at Ardhanaripura. Bright eyed children assemble themselves in the school’s only classroom, chattering excitedly while waiting for their teacher to arrive. The school compound is alive with the laughter of the children. The only other sound in the village is that of the wind blowing through the locked, empty houses. 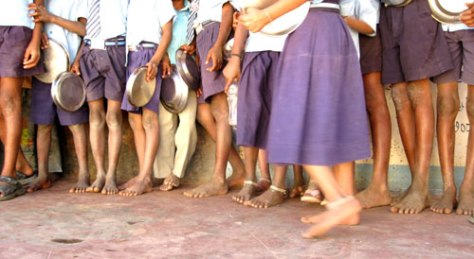 As is the case in most villages in the taluk, the only residents of Ardhanaripura in Kollegal district of Karnataka are the aged and the very young, as all able bodied persons go out of the villages in search of work.

There are a total of 20 primary and secondary schools in the Huthur revenue village with atleast one primary school for every hamlet.

The school at Ardhanaripura is one of the oldest in the taluk. The first school in the Byloor district, it doubles up as a hostel for tribal children. The other hostels at Hiriyambala and Gullathabayalu are falling into disuse as a result of continued absenteeism on the part of the teachers leading to irregular classes.

At the school in V.S. Doddi, students of Class 1-4 and Class 4-7 are clubbed together and taught in two large groups, in order to make up for the lack of teachers required to teach each grade separately.

Back at Ardhanariupura, teachers complain of being short-staffed and underpaid. Only two of the five teachers at the primary school have received formal teacher training, while the others have only studied up to the Pre-University level.

Pavithra Pallavi, a teacher at the P.G. Pallya primary school, said that families readily sent their children to school up to Class five. Secondary schools however, are few and far apart. “Many children drop out after primary school education,” she explained.

Textbooks, slates, uniforms, stationary and meals are free for students up to Class 5, after which students must either enroll in the nearest government secondary school, or opt for a more expensive private school. The only government high school in the area is in the Bylore revenue village. Students who wish to pursue their undergraduation have to travel in order to attend colleges in Hannur and Kollegal.

During January harvest season, children are expected to miss classes in order to lend an extra hand while the family reaps the crop. This leads to large scale absenteeism, often resulting in children failing the classes.

With the grown-ups away at work, children over the age of ten are encouraged to quit their education and stay home to care for the family. Some children even leave the village behind to join the adults at their workplaces. 18-year-old Rajesh, from Havinamule, dropped out after Class 5. He now spends his time herding cattle in the village. For a few months every year, Rajesh joins others from his village as they travel to Bangalore and other cities to find work.

13-year-old Tanu hangs about the school at Ardhanaripura, watching forlornly as the young ones recite the poems and lessons that he knows so well. Chikkamma S., one of the teachers, explains that inspite of having completed his Class 5 two years ago, Tanu has nowhere else to go. His parents work in Coimbatore, she explains. He has to take care of his younger brother until he is old enough to go find work for himself.

Left to their own devices, these children often fall prey to the vices of alcoholism and substance abuse. Locally brewed cheap alcohol is available in plenty, and alcoholism among children is an increasing problem, albeit one that is hushed up. When asked what she wanted to be when she grew up, 8-year-old Soumya from Ardhanaripura mumbled that she wanted nothing more than “to drink”. On being nudged by her mother, she quickly said that she wanted to become a nurse.

Another issue that affects dropout rates is the matter of female adolescent sanitation. When female students attain puberty, they drop out in order to avoid the “embarrassment of staining their uniforms”. “There is a clear lack of education in the matters of adolescent sanitation,” says IAS officer Ashokanand, who has been involved in community development programmes in the Kollegal area for over a decade. Ashokanand was part of the Balakottai experiment, a campaign aimed at encouraging young women to use sanitary napkins by removing the social stigma surrounding menstruation. Once the girls attain puberty, they are either forced out to drop out of schools and stay home or are married off. While panchayat leaders are quick to cover up stories of these child marriages, records of births in the village anganwadi tell a different story.

However, things are looking up for Kollegal. “Mentalities are changing”, says Sr. Philomena, headmistress of the 60-year-old Nirmala High School at P.G. Pallya. “More and more families are beginning to understand the importance of educating their children,” she says.

Mrs. Baby from the Huthur hamlet takes great pride in her children’s education. Pallavi, her eldest daughter is away studying engineering in Bangalore, while her youngest daughter goes to the Bylore High School. “I want them to study for as long as they want to,” she says.

Children from tribal communities are given incentives by the Government to pursue their education. 14-year-old Rani Annapoorneshwari is a 9th grader at the Sri Mahadeswara School. As part of the education scheme for tribal children, Rani gets a scholarship of Rs 500 per month, as part of the scheme to encourage education for tribal students.

Also on the scholarship scheme is 16-year-old Lingaraja from A.K. Doddi. The first in his family to study beyond the 10th grade, he attends Sri Mahadeswara College in the mornings and helps his father in the fields in the evenings. He aspires to become a software engineer and move to Bangalore. Both Rani and Lingaraj belong to the 5 clan Soligas, a relatively more backward community of the Soliga tribe.

An analysis of Kollegal anganwadis

As of 2011, anganwadis in Karnataka have been responsible for providing food to almost 1.4 million children between the ages of three and six. Kollegal alone has over 435 anganwadis, with at least one anganwadi in each hamlet.

In order to facilitate a comparison, four anganwadis in both tribal and non-tribal hamlets were examined. The tribal hamlet anganwadis being considered are the ones at Ardhanaripura and A.K Doddi, which are both Soliga populated hamlets. The non tribal anganwadis are at Huthur and V.S. Doddi respectively.

The anganwadi is supposed to open by 9am and provide its first meal at 10am, followed by lunch at 1am. However, anganwadi staff at Huthur, A.K.Doddi, Ardhanaripura and V.S. Doddi only pick up the children from their houses around 10am. The first meal of the day is usually the rice and sambar, given to the children at lunchtime.

The Huthur panchayat remains shut atleast twice a week. Nanjamma M., caretaker at the Huthur anganwadi explained that the teacher, lived in Kollegal and needed to “change two buses” in order to get to the anganwadi.  Surrounded by the children she rounded up that morning, Nanjamma explained that the teacher “missed the bus again”, hinting that this might be a regular affair.

There is a disparity in records maintained by the anganwadis.

According to anganwadi records, every household with a child under 3 years of age receives 4kg rice, 1 kg ragi, ¼ kg green gram, 1 kg flour and 1 kg jaggery each month. Together these constitute the 500 calories of energy and 12-15 grams of daily protein, prescribed for children from 0-3 years of age. parvati ugare and girija laxmana, supervisors at the huthur and a.k. doddi anganwadis respectively, claim that the prescribed provisions were being regularly distributed among the residents.

However, on speaking to the residents it was found that the households received only 1kg of rice per month, as opposed to the 4kg of rice being recorded by the anganwadis.

While the anganwadi records contain an account of the births and deaths, the data reveal a few gaping holes. Many pregnant women go away to their maternal homes for their deliveries and return to the villages a few months later. The anganwadi fails to supply the provisions to such households, choosing to focus only on the children who have been delivered in and around the hamlet.

The records also fail to address the issue of children who drop out of anganwadis. In the case of children who stop coming to the anganwadi, their names continue to be on the list, but there is no provision to ensure that the allotted food reaches their homes.

A.K. Doddi resident Nagarunayakan’s grandson Santosh stopped attending the anganwadi at 18 months of age because he was “unable to adjust”. However, the boy’s name continues to be on the list at the A.K. Dhoddi anganwadi.

Another issue that came to light was that of children with disabilities being ignored by the anganwadi system. Four-year-old Chinnu, resident of the Huthur hamlet, was born with a congenital birth defect that affects his cognitive and behavioural skills. His grandfather, Siddappa (42), claims that he “did not trust the anganwadi” and says that Chinnu could be cared for better if he stayed home.  “We have no schemes and programmes for such children”, confirms Girija Laxmana.

The anganwadi system ensures nutrition to supplement maternal and infant health. This translates into multiple long term benefits for the community. However, steps need to be taken to iron out the chinks in this delivery mechanism.

Blassy Boben is a student  of Print Media at the Asian College of Journalism, Chennai. This article is based on a field trip earlier this year to cover stories of deprivation faced by the people.