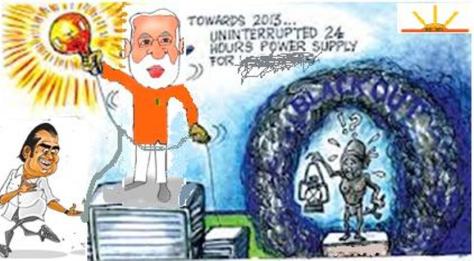 The most visible hype that Modi and his supporters have been generating is over their claim of supplying round-the-clock electricity all over Gujarat. There is no doubt that Gujarat has almost doubled its electricity production between 2001 and 2011. But in the same period Haryana has tripled its generation [1]. Moreover, during Modi’s period (2000’s) the total installed capacity in Gujarat increased by only 44% when during the 1990s it had increased by 73%.

Consider now the consumption pattern. In a state which has been increasing its electricity production rapidly in the recent past, it is expected that the consumption of the electricity must be relatively higher than other states. But here’s what the figures show.

In 1991, long before Modi, as many as 17,940 out of 18,028 villages were already electrified in Gujarat. Even today, despite all the claims of electricity for all, 18 Lakh households in Gujarat have no electricity  [6]. As on March, 2011, 455885 applications are pending for agricultural power connection [7]. Over 5.64 lakh power pleas are still pending from farmers who have sought power for their agriculture needs in Gujarat. At the same time there was three fold increase in power theft in Gujarat between 2010 and 2013 [8]. That means the state is not giving them connection but caught them if they use electricity without having any connection.

Gujarat Government’s own documents reveal that out of 12181718 total households in Gujarat, the main source of lightning in 983813 households is Kerosene, and in 26155 households, other oils [9]. If there is universal electrification how come Kerosene or anything else come to be the primary source of lightning? It seems, Phanishwar Nath Renu’s short story ‘Petromax’ is still relevant in Gujarat. On the contrary, Kerosene’s supply by Government of Gujarat has been consistently reduced since 2001. In 1992 the average monthly allotment of Kerosene oil by state was 83791 kiloliters which increased to 90641 in 2001 but reduced again to 73074 kiloliters in 2005 [10].

Even on paper, the 24 hour electricity supply scheme (Jyotigram Yojana) needs close examination because the provision of 24 hour electricity supply in this scheme is meant only for household use and not for other purposes such as irrigation etc. Under Jyotigram scheme of Gujarat Government, the peasants are getting electricity for fewer hours a day than they did earlier. Under this scheme they get power for 8 hours a day while at the turn of the millennium they were getting 10 to 12 hours of electricity while in the 1980s the farmers were getting 18-20 hours electricity supply [11]. Earlier farmers used to pay flat rate on electricity on agricultural use but now they have to pay according to bill. Due to Jyotigram Scheme landless labourers who cultivate land on lease, face shortage of irrigation water and electricity because they don’t have allocation of electricity and water under the scheme because the scheme is meant only for land-owning peasants.  The price of water pumps in Gujarat has risen 40-60% during last one decade [12].

Who does get duty free electricity, though? Tata’s Nano plant in Gujarat, which apparently has no responsibility towards ground water depletion. What a pity that a rich state like Gujarat, instead of arranging alternative irrigation facilities for peasants, places the burden of curtailing the problem of ground water depletion on the weakest and most starving section of the population while giving a free hand to capitalists in using ground water.

Gujarat government may put forward another hypothesis for explaining the reason for low consumption level in the state, by saying that the people of Gujarat are investment friendly and thus they prefer to save their increased income for further investment rather than spending on electricity. But this hypothesis also cannot work in case of Gujarat because per capita deposit ratio in the state is not good. In terms of credit-deposit ratio, Gujarat is far behind others:

This article is part of Sanjeev Kumar’s report on Gujarat’s model of development, prepared for  Jagriti Natya Manch (Theater Group).