A recent ‘Newshour’ non-debate on Times Now on whether or not an order emanating from the Ministry of Human Resources Development to erect 207 feet high steel flagpoles and giant tricolour flags in Central Universities across India featured a wonderful intervention by Sambit Patra, BJP spokesman and digital magician extraordinaire.

In order to score a point during this shouting match, which consisted of Arnab Goswami and the Artillery Shell called General (Retired) G.D. Bakshi haranguing ‘Students, Professors and other Anti-Nationals’, Mr. Patra flourished an image on his tablet. The image was of six soldiers hoisting an Indian flag. Sambit Patra said that the image was of “Indian jawans, Indian soldiers dying, but holding up the tricolour, at the border”.

I did not know that India now has frontiers on islands like Iwo Jima in the Pacific Ocean. 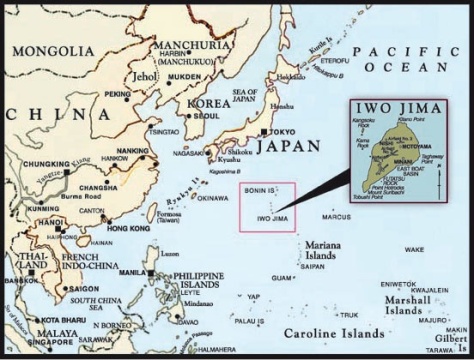 Now it is no secret that Sambit Patra, like most nationalists, has greater faith in photoshop than in history.

Recently, he had also shown digitally manipulated footage, and photoshopped images, to accuse JNU students of terrorist and anti-national activity. The Delhi Police had made a dossier of similarly ‘improved’ materials to show how intensely it has been investigating its case. The best kind of reality, for nationalists, and their pet policemen, is improved, enhanced reality.

The problem is, some of us have photographic memories. And when we see an image, we cannot forget it easily. Like this one. 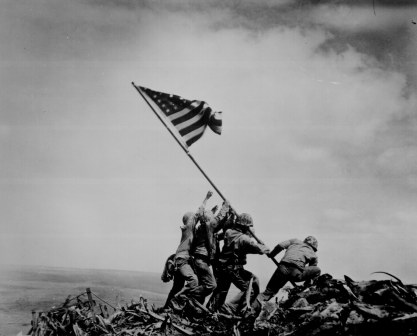 This is the Pulitzer Prize winning photograph titled ‘Raising the Flag at Iwo Jima’ , it was taken by Joe Rosenthal on February 23, 1945 on Mount Suribachi in the island of Iwo Jima in the Pacific Ocean, in the days leading up to the battle of Okinawa during the final months of World War II.

It has had many reincarnations, including after the Kargil War, when it was used as propaganda material for the Indian Army, which, as we know is better known for buying defective weapons, substandard equipment and non-existent coffins for dead soldiers than it is for archival photographic research. This is how the Himalayas rise in the middle of the Pacific Ocean in defense of Akhand Bharat.

But let us come back to the picture, an unfortunate fragment of the actual historical record.

In the case of Rosenthal’s Iwo Jima picture we even know the names of the people in the picture – they are – 5 US Marine Corps men, Harlon Block, Franklin Sourly and Michael Strank, Rene Gagnon, Ira Hamilton Hayes and Navy Hospital Corpsman John Bradley. Block, Sourly and Strank died in action over the next few days at Iwo Jima. Gagnon, Hayes and Bradley survived, and became minor celebrities after the war.

Sambit Patra said that the six soldiers on his tablet were Indians holding up the Indian flag. He did not know that he had actually stumbled upon a fraction of truth. Not about the flag, but about one of the men. One of the men, Ira Hamilton Hayes, Marine, who died as a depressed alcoholic after the war was an ‘Indian’ – a Native American of the Pima ‘Indian’ tribe, from the Gila River Reservation, Phoenix Valley, Arizona.

Ira Hayes was drafted into the war, like many other Native Americans. For him, again like for many Native-Americans, African-Americans, and for impoverished working class white people and Jewish immigrants, the war represented an escape from poverty and the life of humiliation that most marginalized communities faced. Like many veterans, of the World Wars, of the Korean, Vietnam, Afghan and Iraq wars, Ira Hayes was hero for a moment, and then discarded into the garbage bin of history.

Like many Indian Indian soldiers who die defending the abstraction of the flag and the nation, Ira Hayes too fought for a nation that thought of him as dispensable. He died poor, alone, depressed, alcoholic. Like many Indian soldiers do. Because actually, all that invocation of ‘martyred’ soldiers by men in suits in television suits is pure bullshit, and not even their flags are big enough to wipe the stain left by their lies. The rhetoric of the ‘defense of the nation’ is the means by which one of the world’s biggest war machines is maintained, by which corrupt arms deals propel ruthless thugs to power and which send young men to their deaths, either by bullets, or by avalanches, defending territories and antagonizing people in places where no Indian soldier has real reason to be

This is why you have Naga soldiers fighting in Kashmir, and the Jammu & Kashmir Light Infantry fighting in Nagaland. They are just cannon fodder for the indifferent masters of a forgetful nation, more satisfied with photoshopped histories than the actual stories of men and women who they send to die.

There is no flag that is big enough to cover these deaths – of soldiers, insurgents and civilians, not even the one that Smriti Irani wants every university to stitch and erect. The flag is wasted money, the hoarse obscene lies of those who wave that flag as a means to silence questions is wasted breath.

Meanwhile, I have a modest proposal for Sambit Patra, Smriti Irani, General G.D. Bakshi and other people with flagpole erection tendencies and allied disorders. Why don’t you all just photoshop 207 foot flagpoles and gigantic flags on to the pictures of central university campuses and then circulate them on social media. That way, you will have cured the crises in universities with a cheaply made Jugaadu image and have done your duty as Nationalists.

It will be a cost saving measure (especially as Ms. Irani says that her ministry has a real cash crunch, and can’t fund fellowships, research and normal life in Universities,). Besides, think of the money that your Party can make with people signing up for tenders to erect non existent flagpoles, stitch non existent flags. Think of the cuts and commissions that you could make on every contract. Now that is a made to order ‘Make in India’ dream.

He was wined and speeched and honored,

Everybody shook his hand,

But he was just a Pima Indian,

No water, no home, no chance,

At home nobody cared what Ira’d done,

And when did the Indians dance.

Not the whiskey drinking Indian,

Or the marine that went to war.

Jail was often his home,

They let him raise the flag and lower it

He died drunk early one morning,

Alone in the land he fought to save,

Two inches of water and a lonely ditch,

Was a grave for Ira Hayes.

Not the whiskey drinking Indian,

Or the marine that went to war.

But his land is just as dry,

And his ghost is lying thirsty,

In the ditch where Ira died.

16 thoughts on “Sambit Patra Flying the Tricolour on Times Now, in JNU and on Iwo Jima – History Re-Imagined (Once Again) by the BJP”