Ameena Begum was only ten years old when she was married to a man old enough to be her grandfather. The man- a 60-year-old Arab from Saudi Arabia had come to her house in Hyderabad to see Ameena’s elder sister for marriage but found her to be too ‘ugly and dark.’ He instead expressed desire to marry the young Ameena which the father readily agreed in exchange for a paltry sum of Rs 6,000.  She was later rescued by Amrita Ahluwalia- then an air-hostess with Indian Airlines after she found the young girl crying inconsolably on the Hyderabad-Delhi flight in-route to Saudi Arabia.

This incident put the global spotlight for the first time on the practice of ‘bride-shopping’ in the old city area of Hyderabad where minor Muslim girls from poverty-stricken families are married to older, mostly Arab men for a small sum of money. About three decades after this incident of August 1991- nothing much has changed and the practice of Sheikh marriages continue unabated with estimates suggesting around 2000 of such marriages performed only in the last one year.

The genesis of Sheikh marriages can be traced to the late 19th century when the Nizam of Hyderabad started hiring Chaush Arabs from what is the present-day Yemen. These men served as the military guards and later on high positions in the Nizam’s army and administration. The Arabs also brought with them the ritual of offering gifts and dowry to families who would marry their daughters to them. However, when oil stuck in the Gulf and situation in Hyderabad turned chaotic because of the rising peasant movement and later fall of Nizam- many such Chaush Arabs returned to their homelands.

However, till the late 80s the practice of marrying daughters to these relatives and friends who had now moved back to the Gulf continued and so did the practice of paying dowry. Elderly of the area remember that the payment of dowry during those days was prompted with a noble intention of helping the families of the brides to better their often impoverished conditions and maintain some repute of the Muslim community after fall of the Nizam rule. It was however only a matter of time that this tradition took the form of a forced practice with an organized network of middlemen, brokers and qazis emerging to peddle minor girls for these men.

The web of Brokers

The emigration of people from this region to the Gulf has come with multiple benefits for the local economy. However, one of the negative externality it has contrived is the spread of information about the availability of minor girls who could be married to older men for money. An organised ring of brokers has since emerged both in the Gulf and Hyderabad who act as the linchpin of the entire transaction- right from identifying gullible families and convincing them to marry their daughters, arrangement of boarding and lodging for the Sheikhs to fulfilling all necessary documentation. The brokers segregate their clients in three main categories- Autowala, Ambassadorwala and Innovawala depending upon the affluence of the men. While the men in the first two categories are normally accommodated in areas like Chandrayangutta a and other parts of old city, the Innovawala Sheikhs receive a 5-star treatment starting from accommodation, boarding- lodging and even with respect to the kind of girls shown to them. Several houses and beauty parlors in these areas have been illegally converted into lodges which often become the flashpoint of these transactions.

The brides are offered in ‘package deals’ by the brokers starting anywhere from Rs 30,000 going up to a few lakhs- depending upon the duration of the marriage and expectations of the man. The package would include all the paperwork for the marriage, settlement with the qazis, visa formalities (the men normally come on medical or tourism visas) and divorce documents in case of short-term marriages. One victim who was married at the age of 15 years informed that these brokers also provide the girls with new clothes and make-up which they are forced to wear before appearing before the Sheikhs. The girls often numbering from 15-25 are then paraded in front of the men who would choose one of two virgin girls for marriage while the rest are sent back.

The brokers are generally local individuals who apart from a thorough understanding of local demographics can also identify gullible families who are in need of money. They then deceitfully entice the parents to marry their daughters by projecting a mirage of lavish lifestyle for their daughter and family. What is worrying is that a lot of families do not find anything wrong in marrying minor girls and in fact, a few unscrupulous qazis even advocate the marriage of girls at the age of 13-14 arguing that the puberty onsets the urge for sexual desires.

This is not to say that many families genuinely fall prey to the chimeras of dubious brokers in an aspiration of better life for their daughters. One such father informed that his monthly income of Rs 4000 was insufficient to feed a family of six and when a distant relative informed him of a family striking rich because of Sheikh marriage- he was also tempted to push her daughter in the ‘bride-bazar’ for at least a better lifestyle for her. Abject poverty mixed with a perspective with views the girl child as a burden makes the idea of marriage appealing to the families and at times, the bride also. In fact, the saying in Hafeez Baba Nagar which is notorious for such marriages goes that if you want to become rich overnight- marry your daughter to a Sheikh!  However, the reality remains that only about 10% of the money actually reaches the bride’s family and the remaining is mostly gobbled by the brokers.

The convenient bonds of marriages

The Sheikhs enter into broadly two kinds of transactions- kutcha and pucca marriage. In the first case, as the name suggests the marriage is solemnized only for a temporary period- often just for the duration of stay of the men in the city. At the time of marriage, apart from the nikhanama, a khulnama or declaration of divorce that certifies that the wife is leaving the marriage is also signed without the knowledge of the girl or her family. The document is then presented to the girl once the men leave the city after having repeated intercourse with her during his stay in the city. An obvious question which then arises is why men even bother to marry if the entire objective is only sexual gratification? Jameela Nishat who runs NGO Shaheen which has been working for rehabilitation of young girls deserted after such marriages said that since sexual intercourse outside marriage is considered haram in Islam- the fiasco of marriage acts as a shield of self-justification for men that they are not violating any religious norms. 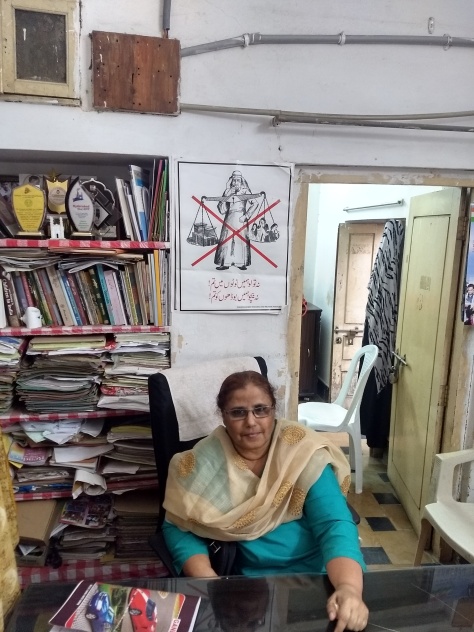 In other cases of pucca marriages, the girls are taken back to the Gulf countries where they are often subject to hostile conditions of domestic servitude and sexual abuse. One victim who did not wish to be identified revealed on how she was successively married to four different men (all above 60 years) after being taken to the Gulf with each marriage lasting for less than three months.  Finally, the last husband boarded her on a flight back to Hyderabad on the promise of sending maintenance but two years hence, neither has she heard from the husband nor received any money. Moreover, while earlier Sheikhs had to come down to Hyderabad for marriage but in the recent times, pictures of girls are sent over Whatsapp by the brokers and marriage is performed on video chat- post which she is sent to the Gulf. Contract marriages have been happening for many years now, but better technology and networking facilities have truly given it a form of an organised international trade.

The absence of rules and stringent provisions in the Qazis’ Act 1880 to regulate the duties and responsibilities of the qazis has virtually given them a free-hand in solemnizing these sham marriages. Only last year, the Chief qazi of Mumbai and a respected figure in the city- Fareeh Ahmed Khan was arrested along with his assistant for preparing forged documents. He was providing fake marriage certificates with the stamp of Oman Embassy to validate marriage and was indulged in large-scale trafficking of minor girls. Shahida who also works at NGO Shaheen informed that many times the brokers simply arrange for unregistered qazis or even fake ones without the knowledge of the girl or the client.

A report from last year also quotes Syed Omer Jaleel, the then special secretary of the Minority Affairs Department mentioning that the Government would introduce an ordinance and later legislation mandating foreign nationals wanting to marry in India to obtain a no-objection certificate from their respective countries. He also averred that the qazis would not be allowed to perform nikaah ceremonies without prior permission of either the police commissioner or the DSP. However, almost a year has passed since this statement but no action has been taken by the Government till now.

In fact, opinions from ground-zero suggest that the politicians and local leaders deliberately maintain a hands-off approach in this matter to avoid antagonizing their vote bank in the area. Last year, when the Telangana South Zone police arrested 20 men including eight Arabs, qazis, brokers and hotel owners in connection with one such marriage, a dozen of local leaders swarmed the Faluknama police station in the support of the accused and a few even rang up the police officials asking them to proceed ‘carefully’ with the investigation.

Hyderabad has become a hunting ground for Arab men who come searching for young virgin brides to please their sexual gratification.  In the shade of the lofty towers of the Hi-tech city lies this gloomy story in the narrow labyrinths of the old city. The girls in these areas have been reduced to meek victims by the structured mafia which has absolutely no regard for dignity, respect or autonomy of the female soul.

The area, in general, has witnessed little investment in terms of infrastructural development or social welfare measures. The communities in this part, and more so the women have been structurally excluded from interaction and participation with the mainstream society. Illiteracy, abject poverty and discrimination have pushed them to further fringes. The idea of an active ‘bride-bazar’ sounds shocking, but it continues to thrive unabated in the best city of the country.

Lovish Garg is a final year law student at Nalsar  Hyderabad and currently serves as the student editor of Law and Other Things Blog.

One thought on “Three decades after Ameena, ‘Bride-Bazars’ continue to thrive in Hyderabad: Lovish Garg”