[We at Kafila are absolutely horrified at the abuse directed at poet and activist Meena Kandasamy for expressing her views on twitter regarding the beef-eating festival at Osmania University. That supposedly ‘neutral’ educational institutions replicate upper-caste Hindu dietary taboos, is no surprise, nor that the ABVP reacted with its customary violence to that questions upper caste privilege. What is shocking is the attitude of the Vice Chancellor and the sexist, misogynist, violent speech directed at her on the web. It is telling that those who take such umbrage at the eating of cows, think nothing of advocating the public rape of women. Below is a statement issued by the The Network of Women in Media condemning the hate speech directed at her. We stand in solidarity with Meena Kandasamy.]

The Network of Women in Media, India (NWMI), strongly condemns the violent and sexist abuse unleashed on poet, writer, activist and translator Meena Kandasamy, presumably in response to her posts on Twitter about the beef-eating festival at Osmania University, Hyderabad, on 15 April 2012 and the ensuing clashes between groups of students. END_OF_DOCUMENT_TOKEN_TO_BE_REPLACED

This is a guest post by AKSHATH JITENDRANATH, student at Symbiosis International University, Pune, where a screening of ‘Jahsn-e-Azadi’ by Sanjay Kak was cancelled under pressure from right-wing groups and the Pune Police.

The university campus is where nascent opinion moulds itself into ideological shape. Care must be taken to surround the student with ideologies of different shades. This is a prerequisite for any educational ideology that aspires to be holistic. Pursuant to this end the Symbiosis International University is guided by an ideology that reads, Vasudhaiva Kutumbakam, meaning the whole world is one family. This is a high ideal to be guided by.

However, the events that transpired over the last few days have left this vision a little blinded. Following threats received from the Akhila Bharati Vidyarthi Parishad  (ABVP henceforth), the Symbiosis College of Arts and Commerce have postponed indefinitely, ‘Voices of Kashmir’, a national symposium on Kashmir which was to be held with the support of the University Grants Commission. The ABVP’s major bone of contention was the screening of well known film maker Sanjay Kak’s film, Jashn-e-Azadi (This Is How We Celebrate Freedom). The ABVP claim that the film and the film maker represent an ideology that is anti-India. Further, they threatened violence if the film were to be screened. The administration of the Symbiosis International University, instead of being guided by their ideological vision, gave in to the ABVP threats. END_OF_DOCUMENT_TOKEN_TO_BE_REPLACED 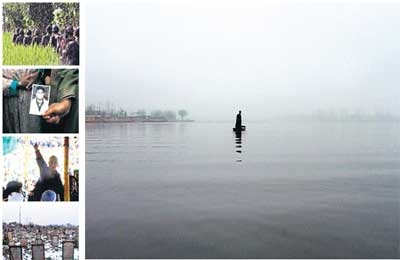 You are faced with an extraordinary situation. A symposium on Kashmir that was to be held in your institution with the support of the University Grants Commission, has been, postponed (see update at the end of the post) following complaints by activists of the Akhil Bharatiya Vidyarthi Parishad (the student wing of the extreme right-wing militia that goes by the name of the RSS) against the proposed screening of a documentary film ‘Jashn-e-Azadi‘ (‘This is How We Celebrate Freedom’) by the well known filmmaker Sanjay Kak. These complaints, which could more accurately be called threats, have unfortunately received the tacit endorsement of senior police figures in Pune and seem to have met with the approval of your principal. (Thanks to The Hindu – see links above –  for the two balanced reports on this issue.) While the seminar may or may not be held (it stands ‘postponed’ as of now) the administration of Symbiosis have succumbed to the insistence of the right wing groups that Jashn-e-Azadi’s screening remain cancelled. END_OF_DOCUMENT_TOKEN_TO_BE_REPLACED

The Hindu reports that a university in Pune has cancelled a planned screening of Sanjay Kak’s 2007 documentary film, Jashn-e-Azadi: How We Celebrate Freedom.

Speaking to The Hindu over telephone, Symbiosis College of Arts and Commerce principal Hrishikesh Soman stated that the ABVP had approached him on Friday, and that the college agreed to cancel the film screening “considering their [ABVP’s] emotions and feelings.” “I told them that the seminar is entirely academic, apolitical and non-religious. But the film has met with criticism from all corners. So we have decided to avoid unnecessary controversies and cancel the screening,” Mr. Soman said. “If people have a very strong reason to protest the film, then we should be tolerant enough,” he stated. [Link]

Shameful as this censorship is, it is a compliment to Sanjay Kak’s fabulous documentary film that the goons of the Akhil Bhartiya Vidyarthi Parishad don’t want people in Pune to see it. The truth about Kashmir must not be told. This is also an example of why the BJP props up its ‘minority morcha’ to oppose Salman Rushdie visiting Jaipur: they want the Congress and the ‘secularists’ and the Muslims to be seen as censor-happy so that they can get away with their own censorship.

Freedom of speech and expression in India, RIP.

Just as Satanic Verses freely circulates on the internet, you can also watch Jashn-e-Azadi online, for free.