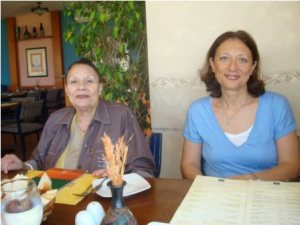 Transcript of a land line phone conversation between my friend NAHED MANCYP (based in Toronto) and her mother a (a blogger herself) and grandmother (both currently in Alexandria). Her mother will write a piece soon which can get to Nahed only after the ban on the internet is lifted in Egypt. Thank you Nahed.

We arrived in Alexandria from Cairo right after Friday prayers. The streets where completely empty. I actually made a bet with dad. Dad said, I don’t think anything is going to happen. I said, no something will. Half an hour later I began feeling really embarrassed because it looked like nothing would happen. The streets where deserted, there were no officers or cars.

Then we were sitting and having lunch around 2pm and we started hearing slogans and we ran to the balcony. Then we saw a group of people passing by the police station close to our house.  There were about 2,000-3000 people. They stopped in front of the police station and chanted: “Al sha3b 3az yasqot al nazam” (the people want the regime to step down).  Then they continued to pass by.

By 2:15-2:20 we heard even louder chants, the second wave of demonstrators had no end.

There was a minimum of 50,000-to 100,000 passing by us. They were chanting “salmeya salmeya” (“peace peace” “Hosni Mubarek ya kharib’ha, itla3 bara yala sibha” (Hosni Mubarak who destroyed it, go away from our land and leave).

There were people of all classes, ages, religions, etc..(but mainly young men and women between 15-30) I saw a twenty year old demonstrating with his mom on a wheelchair. I was so happy it looked like this. The demonstrators would start chanting for people they saw watching from the balcony to come down.  Most people did.  Everyone was sharing food and water. It was being passed around for all.

We saw one man jumping to call us down from our balcony louder and more enthusiastic than the others. We realized it was your uncle. Dad just left to join him 10 minutes ago. No cell phones are working, only landlines. So we called his wife to tell her not to worry about her husband and that dad has joined them. It’s not scary though, it’s amazingly peaceful. In Alexandria the police are refusing to fire tear gas.

There was a moment when the demonstrators were outside the police station. I couldn’t see what happened but everyone in the demonstration started to cheer. I think that some officers must have joined because all the protestors where so happy, they grew, and moved on. The pictures they are carrying are national icons, Mustafa Kamal, Saed Zaglool, etc. And every now and then people will start singing national songs; Baladi Habibi. You couldn’t see any signs of the Muslim Brotherhood, everyone is just protesting together.

No internet, no phones, no TV stations that show what is going on (specifically AlJazeera), and Egyptian stations are playing movies and music. And in spite of all of this, the protests are so strong. I’m so happy, I can’t describe it.  It is the first time I see hope in peoples eyes. I am sure something will happen.

…. there are more protestors coming, but from the opposite direction. They are a different protest that will all probably join at the east point of Alexandria.

I don’t know what will happen next. Rumor has it that the Minister of industry and trade was called back from the World Economic Forum in Switzerland. So there is a rumor that he may be forming the new government.

Demonstrators have signs saying “Jeddah is waiting for you (Mubarak)” Hahaha.

My grandmother comes in from the balcony laughing:

Two security vehicles were going down the street slowly, I think they were coming back to the police station near our house. When the rank and file officers came out the protestors started giving them cigarettes and water. And they are smoking, and they are not supposed to do so while they are on duty. (laughter). I want to make them coffee and tea.  It is really peaceful, its so peacful, it’s amazing.