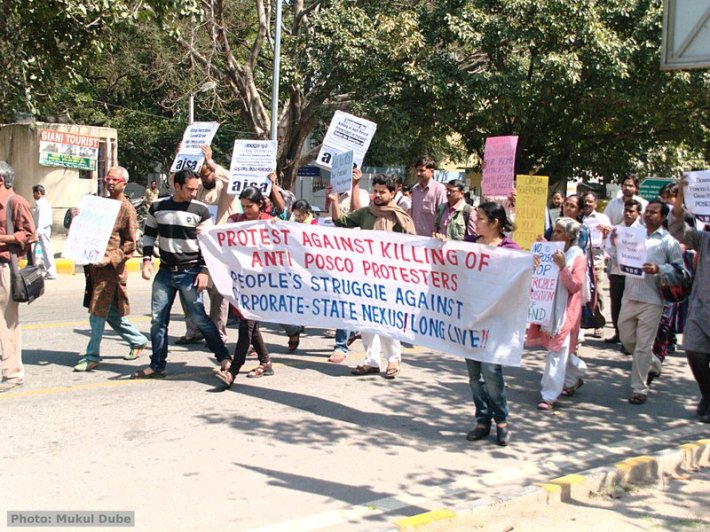 In the continuum of brutal attacks on the struggle against forcible land acquisition for a POSCO steel plant in Odisha, the most recent case of blatant violence perpetrated by the corporate–police-goonda nexus in the region saw the murder of 4 people in Jagatsinghpur district.
On 2nd March, hired musclemen of POSCO with the full complicity of Odisha Police threw bombs at anti-POSCO activists in Patana village, in which 4 activists were killed and several others were seriously injured. Out of the 4, 3 were killed as a direct consequence of the police’s refusal to arrive at the spot for 15 hours after the bombing, or arrange for an ambulance to take the injured to a hospital.
The active connivance between the POSCO management and local contractors along with the Odisha Government to violently suppress the anti-POSCO struggle through every unconstitutional and illegal means, from hiring criminal elements to intimidation and murder of local activists spearheading the movement, has exposed the extent to which they are willing to bypass the law to bulldoze their way by means by brute force.
Matters have not stopped there, again on 5th March 2013, 12 platoons of armed police led by the District Collector and SP forcibly entered Gobindpur village and destroyed more than 25 betel vines – the major source of livelihood of the protesting villagers.
The Odisha government is going ahead with the forcible land acquisition for the steel plant despite the fact that POSCO does not have an environmental clearance for the project. The environmental clearance given by the Ministry of Environment and Forests (MoEF) on January 31, 2011 was suspended by the National Green Tribunal (NGT) on 30 March 2012. POSCO does not even have a valid memorandum of understanding with the State government now. The one it had signed on July 22, 2005 lapsed on July 21, 2010 and no fresh MoU has been signed so far.
We strongly condemn this complete disregard for any kind of democratic processes, and the blatant use of brute force through police as well as goons to brutally crush the movement that is going on in the region.
We demand that the:
1. Ongoing forcible land acquisition for POSCO plant be immediately stooped.
2. Police force be withdrawn immediately from proposed POSCO plant area.
3. Suspend the District Collector and Superintendent of Police of Jagatsinghpur District immediately.
4. False criminalisation of the protesters be stopped immediately.
5. Prosecute those responsible for the bomb attack on PPSS activists.
(Memorandum submitted by different political organisations and individuals to the Resident Commissioner in Delhi addressed to the Chief Minister of Odisha after a demonstration held outside Odisha Bhawan on 9 th March to protest against the killing of Anti – POSCO activists and against the ongoing forcible land grabbing by Odisha Government for the proposed POSCO Steel Plant. For further details see http://nsi-delhi.blogspot.in/2013/03/protest-held-in-new-delhi-against_10.html?spref=fb )