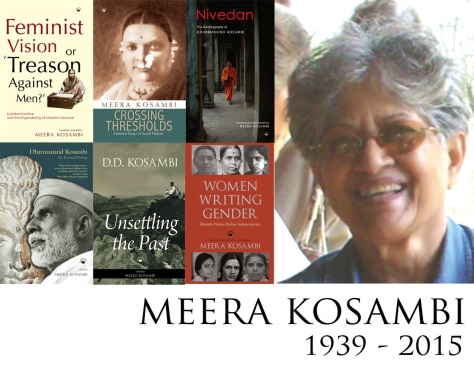 Meera Kosambi, best known for her scholarship on Pandita Ramabai, passed away at the end of February. Uma Chakravarty, feminist historian, writes on FeministsIndia about the work of Meeratai, as she sternly admonished me to address her, when I casually called her Meera! I met her only once, a few years ago, and was enthralled through the lovely Maharashtrian dinner she had prepared, by her personal warmth and sharp intellect. ‘I dont like these Western ways of addressing older people’, she had said, ‘We have such lovely words of respect and affection, why not use them?’

Meeratai, you will live through your work. Salaam.

And here is Uma Chakravarty:

Many years ago, before Meera Kosambi began to write on women in 19th Century Western India, a region that I wrote on in my work on Pandita Ramabai, the only Kosambi on my intellectual horizon was D.D. Kosambi, her father, who towered over the history writing scene.

So it was not surprising that when I first met her sometime in the 1990s, a lot of our conversation was about her father and also about her grandfather Dharmanand Kosambi because of my interest in Buddhism. Belonging to such an illustrious family it would have been difficult to carve a distinctive space for herself as Meera Kosambi certainly did.

Read the rest of this tribute here.