From the very title you can tell that it is a story with a happy end. It is also a true story. 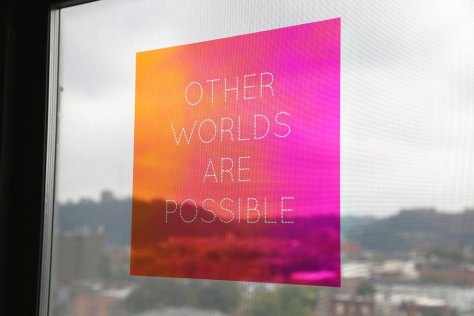 Once upon a time there was a campus. In a slightly shabby postcolonial country. When they became post-colonial, they decided they needed somewhere to send their bright minds, so they could think, read, and learn to write. And since they were dusting themselves off after they had booted the colonisers out, they also knew that most people in that shabby country had nowhere they could send their kids to learn and grow because everyone lived in all kinds of faraway parts of the country, had no money, and had very difficult lives. Some enthusiastic, farsighted, and sensible people in their parliament decided to make this possible. They made the laws, they found the space, barren and brown, in a hot part of a sprawling northern town. Then they got the best minds from everywhere, to teach and to learn, so that together they could do their best to make everyone a citizen of a slightly less shabby postcolonial country.

For half a century, this campus flourished. It became green from brown, it had slightly rickety places for everyone to live in. There were many small and big places you could go for a hot meal. Yes, it cost the government some money, but not that much. There are people who say very tall buildings are phallic symbols. Interestingly though, the tallest building on the campus was the library. Slowly, the busy people on this campus took on the responsibility for how the shabby postcolonial country would think. Not everyone was happy, but all these people were so sincere and so committed and so good, that no one could really say they were wrong. They learned languages from all over so they could speak with the world, they learned about the past in history, about the present in sciences that were very talkative and social, and thought hopeful and sciencey thoughts about the future. Even the walls danced with poetry, purpose, and an abandon of colour.

Then came those years of frightening and radically evil people who began to take over entire countries. Not that this was entirely new, it had happened before. How that could happen again is being investigated to this day, but is dark matter for another story. And then this shabby postcolonial country fell to the same fate.

Mouldiwart was his name. There was a frightening fiftysixness about him. He did many evil things that struck fear in everyone’s hearts. One among them was sending bent malevolents to this little campus in all shapes and forms. You were trying to get the shabbies to think? I’ll show you what is what, he said. He had awfully wicked men infiltrating every walk of life. First, he sent Pompetent Cawthority, a very unimaginative person, who tried to wash all the walls of their songs and slogans and colour, and then, with his cohorts began chewing up the whole campus, people and all. He recruited a bespectacled (un)gentleman called Gobarnabswamy. Gave him a list of names to call these campus people with. From the idiot box, G started shrieking at everyone and saying that the poor serious people of this little green and red campus deserved it even when some very young goons, who would do well to come to the campus library and read for a while, were sent by Mouldiwart’s Raspittoon to beat everyone up.

One day, it had become too much. And this peace loving campus, where ganja grows wild and everyone is safe and gentle and cared for, decided to go to war. They’d had some decades of training, they just didn’t know it. Over all the years of forming sexual harassment committees and fact finding teams and birdwatching groups and unions, writing pamphlets for causes far and wide, they had learned one thing: there was no alternative to speaking truth to power. No matter how frightening.

And so they went to war. Their only weapon was their optimism and the ridiculous belief that the world had to be made less shabby for everyone. So they spoke to everyone who had taught or studied there in the past, they spoke to anyone who would listen, they went to court, they wrote to other universities around the world, who bravely stood by them, and smart people across the world started to speak about this little campus. They also realised there were other campuses out there in countries both shabby and not-at-all-shabby that were being treated like they were. Everyone who was really nobody joined hands, spoke in public places on upside-down cartons, painted posters, tweeted, and sang and sang till their throats hurt.

Slowly, the sound of their voices went everywhere. And that was the end of the malevolent men that had held all the power in the world at the time. The details of those years are too colourful and too plentiful to recount here. (Go to the library, and you will find a whole shelf dedicated to those days – maybe you will choose one of those titles for your assignment-number-four). What happened was that Pompetent Cawthority ran away, never to be seen on any campus. It seems the place he had been a tyrant at before, had also shown him their main gate. There is still a missing person complaint in the local thana. I saw the police station kitten scratch idly at his thick file. Dentists across the world (among many, many other types of people with a heart) stood with the campus and refused to fix his teeth which he broke while trying to chew up our little campus, people and all. The idiot box shut down all the lies that had been told, sent G back to journalism school, and finally, one day, the whole shabby little country sang Mouldiwart out.

It took a while, but things fell back into place. The little campus went back to telling all kinds of truth. And everyone but a few you-don’t-know-whos lived happily ever after. And if you don’t believe me, you can take a crowdyass bus and go there. Get down wherever you like inside. You’ll get tea, lots of serious sounding gupshup, cameraderie, and simple, ridiculous hope. And no one will bother you if you just want to sit quietly and think your own thoughts either.

Oh, and did I tell you that you’d also see peacocks and blue cows?

3 thoughts on “Once Upon a Time There Was a Campus (and Why it is Still There) – A Fable: Hammersickle Rubberchappal”