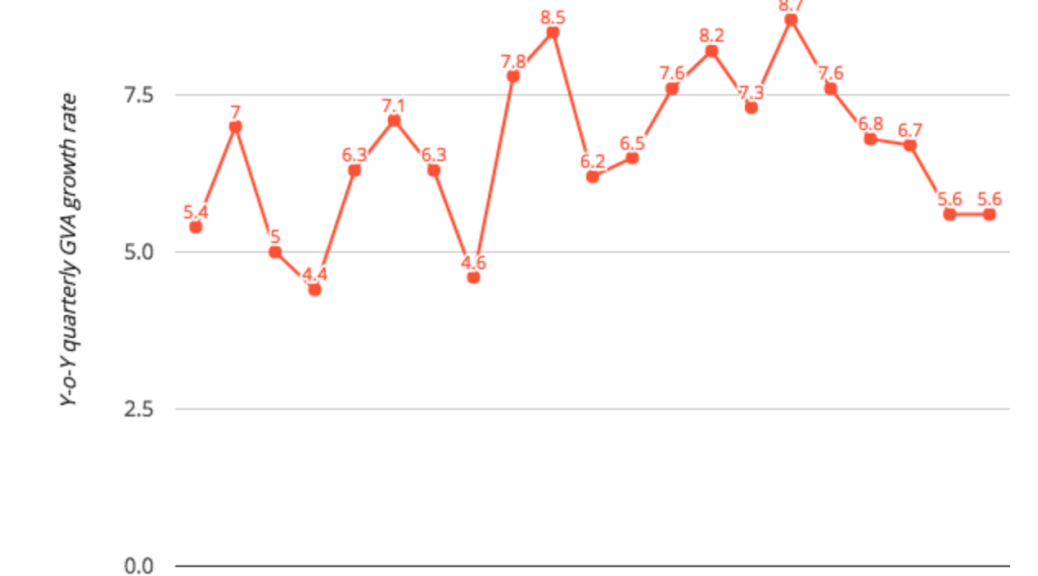 by Samarth Bansal and Aman Sethi

On October 4, Prime Minister Narendra Modi offered a robust defence of his government’s management of the economy, shortly after the Reserve Bank of India lowered its Gross Value Added (GVA) growth estimates for the current fiscal year from 7.3% to 6.7%.

Since then, the ruling party has been pains to push a positive narrative on the economy,  extent of emailing clips of the speech to journalists who write about the economy.

So, what is the current state of the economy? Here’s a reality check.

How many jobs has the economy created?

Modi said: “Upto March 2014, the subscriber base of the Employees Provident Fund Organization (EPFO) stood at 3.26 crore. Over the last three years, the numbers increased to 4.8 crore. Some people forget that this number can’t increased without a corresponding increase in employment.”

Reality Check: EPFO numbers have increased, but this doesn’t necessarily mean that total employment has increased. In July this year, this jump in EPFO subscribers was attributed to a government amnesty scheme which allowed firms to come clean on their actual staff strength without being penalized. In a detailed note, Mahesh Vyas, Managing Director and CEO of the Centre for Monitoring Indian Economy (CMIE), explained why using EPFO data as a proxy for job creation is “fraught with danger.”

Referring to the jump in the subscriber base, Vyas wrote: “This is not new employment. It is merely enrollment of employed persons into EPFO.”

As Samarth wrote in May this year, it is difficult to assess job creation in the absence of credible official figures and surveys. The numbers are either unreliable or dated.

The only numbers that we have come from the CMIE, which Bibek Debroy, member of the NITI Aayog and now Chairman of PM’s Economic Advisory Council, has endorsed as a credible source of data in public statements.

According to a CMIE report dated 26th September 2017, “1.5 million jobs were lost in the first four months of 2017 and job losses have continued into the next four months as well,” suggesting that the Indian economy is shedding formal sector jobs at an alarming pace.

Are pessimists latching onto just one quarter of low growth?

Modi said: Pointing to critics, Modi said that a slowdown in one quarter has become the biggest news for people who have a tendency to spread pessimism.

Reality Check: The economic slowdown has become a big talking point after the Central Statistics Office said that growth in the first quarter of 2017-18 had slumped to 5.7% —slowest pace of expansion in three years.

But the story is not about one quarter: growth has consistently been slowing down since the last six quarters—pointing to structural concerns in the Indian economy, and not reflective of demonetisation and GST alone. 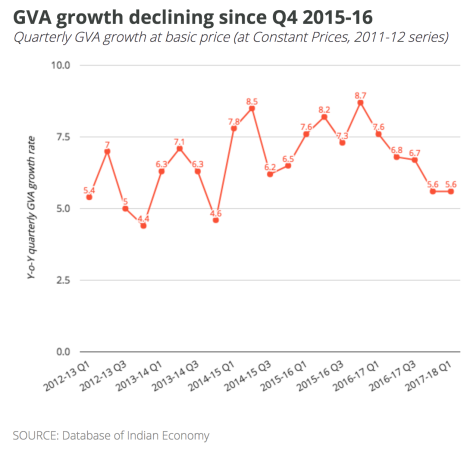 Surjit Bhalla, an economist who was appointed as a member of the newly constituted PM’s economic advisory council, said in an op-ed for the Indian Express: “The average GDP growth for the two years prior to the election of Narendra Modi election in May 2014 was 6.4 per cent; even if for the rest of this fiscal year GDP growth averages an unlikely 6.5 per cent each quarter, the fiscal year numbers will not match the UPA average for their bad years. Yes, that is how bad GDP growth is today”

Talking numbers, Bhalla wrote: “The GDP growth number for the latest quarter (2017 Q2) was bad, very bad. It came in at a year-on-year growth of 5.7 per cent. Just to provide a perspective — the low growth reported was the eighth worst quarter since 2011, and the 14th worst quarter since the start of the high growth period in 2003/04.”

Modi said: Low growth in the time of UPA-II was more dangerous for the economy, because during that period, India was struggling with high inflation, higher current account deficit, and higher fiscal deficit.

Reality Check: Modi is right: Inflation is under control and central government’s fiscal deficit is declining. 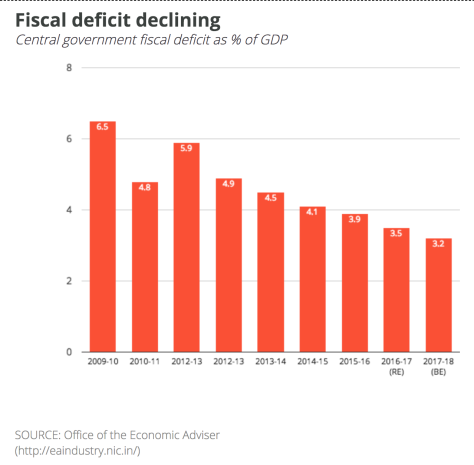 Critics who have raised concerns about the growth rate acknowledge this.

Even The Economist, which wrote a sharply-worded critique about Modinomics earlier this year, said, “Mr Modi does deserve credit for bringing macroeconomic stability. Perennial scourges such as double-digit inflation and ballooning current-account deficits have been absent.”

But the macro-economic indicators have been helped by placid international conditions, particularly low oil prices. While most international economies are picking up, Indian exports are flat, and private investment is hamstrung by our crisis-ridden banks.

Modi said: RBI has said that in coming quarters, growth rate is projected rise to 7.7%.

Reality Check: Here is what the RBI said  in the monetary policy report released yesterday.

“Taking into account the outturn in the first half, the baseline assumptions, survey indicators and model forecasts, real GVA growth is projected at 6.7 per cent for 2017-18 – 6.4 per cent in Q2, 7.1 per cent in Q3 and 7.7 per cent in Q4 – with risks evenly balanced around this baseline path.”

This means the RBI expects the growth rate to hit 7.7% nine months into the future. But if we look at average growth for the entire year, the RBI has actually lowered its growth estimate from 7.3% to 6.7% for the current financial year.

FDI inflows as an indicator of the economy’s growth prospects

Modi said: The increased FDI inflow in the country, Modi said, is an evidence that foreign investors have great confidence in the Indian economy.

However, FDI figures are not indicative of current growth rates.

In fact, total private investment as a whole – i.e. both domestic and foreign – in India is shrinking.

Private investment came down from 27% in 2011-12 to only 21.9% in 2016-17, Sudipto Mundle, emeritus professor at the National Institute of Public Finance and Policy, wrote in Mint.

Even the RBI accepts this. In its note released yesterday, the central bank said, “Investment demand remained depressed, with its share in GDP declining from 34.3 per cent in 2011-12 to 29.5 per cent in 2016-17… Although GFCF [Gross Fixed Capital Formation] exhibited a slender recovery in Q1:2017-18, the overall investment climate remains bleak.”

Economists say that private investment is likely to remain depressed India fixes its banks. As things stand, India’s banks are sitting on thousands of crores worth of bad loans, making it impossible for them to lend to the credit-starved economy.