If you key in “remote island” on Google, most of the news stories it throws up are about an unfortunate and very dead young man named John Allen Chau. If you type in “remote Indian island”, Google will take you immediately to North Sentinel Island.

We are all, by now, familiar with sad tale of John Allen Chau and his ill-fated voyage to Sentinel Island. A young evangelical from the United States, Chau was – apparently from a very tender age – fired with zeal to convert to Christianity the natives of a very specific island in the Bay of Bengal: viz., North Sentinel Island in the Andaman & Nicobar archipelago. 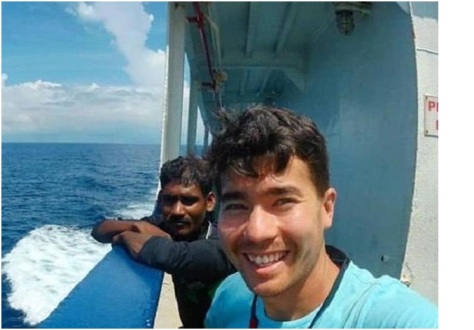 Two weeks ago, in mid-November, after bribing local fishermen to transport him and his water-proof Bible to the island, and after several failed attempts to bring the Word of God to the Sentinelese (not helped by the fact that the Sentinelese spoke no English nor Chau Sentinelese), the indigenes finally had enough of the annoying young man, shot him full of arrows and buried him in the sand.

Those are the bare facts of the case, and we are told attempts are on, despite the advice of many experts, to recover Chau’s body from the beach at North Sentinel Island.

There is something so irresistibly Boys’ Own Paper and Rider Haggard-ish about the story that the world’s press has been all over it since the day the young missionary’s co-conspirators, the fishermen who took him to North Sentinel, reported young Chau’s untimely demise to his associate in Port Blair.

The fact that North Sentinel Island is impossibly remote, even remoter than the Andaman & Nicobar islands – which are incredibly remote to begin with – was the first thing we learned from the media. Indeed, it seems almost mandatory for journalists, both foreign and Indian, to use the adjective ‘remote’ in all references to these islands, much like the Assamese prefix all references to the Brahmaputra with ‘mighty’.

The islands are most certainly remote: Port Blair is the exact same distance from Delhi as remote Coimbatore, and a third of that distance to Bangkok.

The other thing we learned was that North Sentinel is about “the size of Manhattan”. The entire western press – from the BBC to the New York Times – assures me that this is so, except UK’s The Guardian, which perversely insists it’s only two-thirds the size of Manhattan.

Not to be outdone, the Indian media – the Times of India, Hindustan Times, Indian Express, Deccan Herald, The Hindu, NDTV, to name just a few – also swears by the Manhattan yardstick when describing the physical characteristics of North Sentinel.

Since Manhattan is considerably more remote to me than the A&N Islands, I had to look up the size of Manhattan. 59.1 sq kms, which is indeed about the size of North Sentinel. As a long-time resident of India, I would have preferred a comparison closer home like, say, Shillong or Kolhapur, which are also the about the size of North Sentinel Island. Or, to compare islands to islands, “about twice the size of all the Lakshadweep islands put together” because, really, North Sentinel is not very small despite the western media’s insistence that it is tiny. (As in “the isolationist Sentinelese tribe on a tiny, remote island in the Bay of Bengal” (CNN)).

North Sentinel Island is bigger than Bermuda, twice the size of Macau and nearly as big as the Most Serene Republic of San Marino. But it’s not just the island that’s tiny to western eyes. The tribe is tiny, too, as are the tribes-people. But more of that later.

As to its remoteness, North Sentinel is just 53 kilometres west of Port Blair. Or, in terms the media can understand, the distance from Noida to Gurgaon.

But the smallness, remoteness and general savagery of the Andaman & Nicobar Islands and its inhabitants has been a recurrent theme in books and media since the colonial era, one of the more egregious examples being Tonga the Andaman Islander in the Sherlock Holmes canon.

Tonga, in The Sign of the Four, identified by some Sherlockians as Sentinelese, and is described by Conan Doyle as “a little black man the smallest I have ever seen with a great, misshapen head and a shock of tangled, dishevelled hair.” Tonga’s “small eyes glowed and burned with a sombre light, and his thick lips were writhed back from his teeth, which grinned and chattered at us with half animal fury.” (It should be noted that natives always chatter or jabber or gibber, – Chau observed that they “make high pitched sounds” –  it’s a miracle they manage to communicate even among themselves).

According to a gazetteer that Holmes quotes in the novel, possibly indicative of scientific insight in the 1890s, “The average height [of Andaman islanders] is rather below four feet, although many full-grown adults may be found who are very much smaller than this. They are a fierce, morose, and intractable people […]. They are naturally hideous, having large, misshapen heads, small, fierce eyes, and distorted features. They have always been a terror to shipwrecked crews, braining the survivors with their stone-headed clubs, or shooting them with their poisoned arrows. These massacres are invariably concluded by a cannibal feast.”

There you are: fierce, hideous, diminutive cannibals inhabiting remote Indian Ocean islands, desperately in need of pacification and/or conversion.

From a purely literary perspective, I can understand the West’s fascination with fierce and hideous cannibals inhabiting remote tropical islands, but why do they have to be small? Surely a large, hideous cannibal would be so much more terrifying than a small one, but no, we are assured by a great many authorities that the Sentinelese are practically pygmies. Heinrich Harrer (of “Seven Years in Tibet” fame) is quoted as saying the average Sentinelese man is 5 feet 3 inches tall, which, according to Wikipedia, is shorter in stature than average humans and a product of ‘insular dwarfism’.

Significantly, John Allen Chau, who observed the Sentinelese at uncomfortably close quarters, and more recently than Harrer, put their height at about 5 feet 5 inches. That is not noticeably short. Indeed, at 5 feet 5 inches, they would be as tall, if not marginally taller than the average Indian male, who stands 5 feet 4.9 inches in height, and taller than Aamir Khan. However, the Indian media, which presumably takes its cues from the New York Times, also faithfully reported that the Sentinelese were “short statured” and “resemble African pygmies”. (Really, Prannoy Roy? You may stand tall among broadcasters, but you are 5’8″ in your lifts).

The Sentinelese may well be a lot taller than the Jarawa or Onge, and the only people to have got this right seem to be the Joshua Project, the somewhat wacko organization that highlights “ethnic groups of the world with the least followers of evangelical Christianity”, and the go-to resource for Christian missionaries like Chau. The Joshua Project describes the Sentinelese as a “dark, tall people who hunt, gather, and fish” (and who, it should be noted, “need to know that Creator God exists, and that He loves them and paid the price for their sins”).

The appalling exoticization of the Andaman & Nicobar Islands, and general ignorance about what goes on there, is wide-spread and persistent. Back in 2014, when Malaysia Airlines Flight 370 vanished somewhere over the Indian Ocean, the level of drivel written about the A&N Islands touched stratospheric heights. The remoteness and mysteriousness of the islands were frequently invoked, and CNN solemnly reported that, though very unlikely, “aviation experts say it’s possible … that someone could have hijacked and landed the giant Boeing 777 undetected. The international airport in Port Blair, the regional capital of the Andaman and Nicobar islands, has a runway that is long enough to accommodate a 777, according to publicly available data.”

The suggestion that someone could have tip-toed a giant airliner undetected into Veer Savarkar Airport in a heavily militarized zone makes you wonder about American media. And aviation experts. One is not surprised they haven’t found the plane yet.

There is no doubt that romantic and hazardous White Saviour fantasies must have prompted the unfortunate young American to head for Sentinel Island (population: 40-200) of all the – literally, to Chau – God-forsaken parts of India. It should have occurred to Chau that North Sentinel is not the only place in India with “the least followers of evangelical Christianity”. Pretty much 98% of our population hasn’t heard the Word of God yet or, at least, embraced it with sufficient enthusiasm.

Without stirring far from his hotel room in Paharganj – assuming he transited through Delhi – young Chau could have brought the Light of Heaven to a thousand non-believers far less likely to terminate his Great Commission with such finality as the implacable Sentinelese.