As a spontaneous reaction to the failure of the government to bring the discussions with the farmers to a conclusion even after eight rounds of discussion, many farmer-organizations in North Karnataka took out a tractors protest rally today. A broad-spectrum of farmer organizations, civil society organizations and members of political parties participated in it. 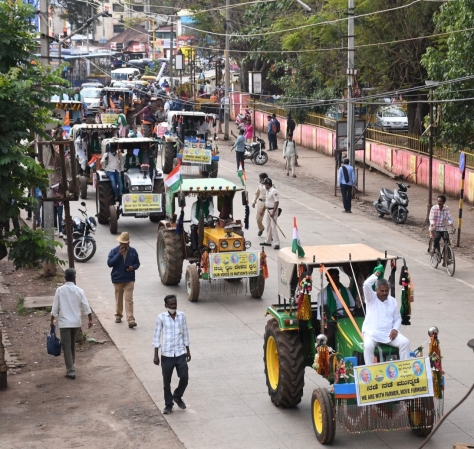 The slogans in Kannada, translated into English, were
‘The nation survives, only if the farmers survive’,

‘Who allowed them to die in the cold, who wants the farmers to be sold?’

‘One tractor for One Martyr’.

The rally had symbolically allotted one tractor each for the farmers who died while camping near Delhi.

The tractors had banners carrying photographs of Mahatma Gandhi, Basveshwar and Dr. Babasaheb Ambedkar. The people in them had the tricolor with them.

The other tractors were asked to assemble at the Kadappa Maidan. The rally began by garlanding the statue of Ambedkar and, after passing through the main streets in the old city,  ended by offering flowers to the statue of Basaveshawar. On the way it formed a circle at the jubilee circle crossing. Farmer leaders addressed the crowds there and announced that on the 26th January, when the farmer unions gathered near Delhi take out a tractor parade, in Belgaun, Huballi and Dharwad similar parades will be taken out with 2000 tractors in participating in the parade.
It was a clear signal that the farmers in Karnataka,  a state where agriculture is the life line, are determined to join the current farmers struggle with all their strength. What was remarkable about today’s rally in Dharwad was not just its powerful symbolism but also the unity among the farmers organization that was clearly visible. Northern Karnataka has seen in the past extremely powerful farmers movement, the rayat-horat.
People who watched the unity, symbolic power and the discipline in which the farmers and their tractors conducted themselves were reminded of the earlier rayat- movement that had  rocked the Karnataka government.

One thought on “Farmers’ discontent – a report from Karnataka: Ganesh Devy”