This post is the English translation of an article in Punjabi by NADIA SINGH, published first in Punjabi Tribune.

In a February long ago, in 1978 to be precise, thousands of American farmers  rode into Washington D.C. on their tractors, from all across America. Some travelled  for days together, covering journeys of hundreds of miles. What was the mission behind their long and arduous expedition? They were demanding fair prices and an equitable model of agricultural development. 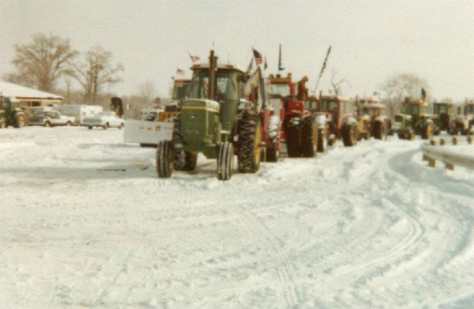 In the 1970s US had initiated drastic changes in its agrarian policies under the “Get Big or Get Out” paradigm. This policy sought to replace small family run farms and consolidate them into large-scale factory farms. Policy makers in the US believed that industrial farming represented a more efficient and profitable economic model, compared to small and medium farms run independently by farmers.

Till the early 1970s, US followed the doctrine of “parity pricing”, this was a system of price floors which guaranteed a certain minimum level for farming households. However, from the mid-1970s onwards, with aggressive lobbying by agri-business concerns, these minimum support guarantees began to be systematically dismantled. Also, during this time the prime interest rates in US were at an all time high at 21.5 percent owing to the oil price hike. Thousands of farmers in mid-western states were unable to keep up with their debt payments and  forced into foreclosures. Foreclosure is the legal process through which a lender attempts to recover the amount owed on a defaulted loan by taking ownership of and selling the mortgaged property. 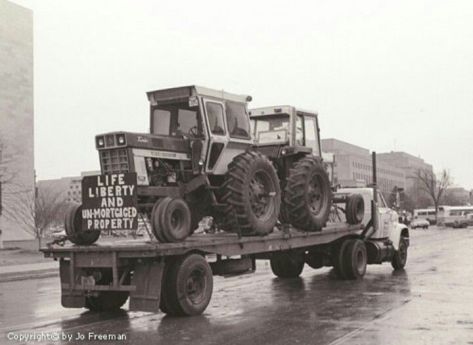 In order to protest against these adverse developments, the American Agricultural Movement was launched. On February 5, 1978, farmers from across the country began a “tractorcade” to Washington D.C., demanding protection against foreclosures and 100% parity pricing to ensure that the price of agricultural produce does not fall below the cost of production. They displayed signs saying, “Parity, not charity” and “Do not complain about famers with your mouth full.”  This “tractor cade” brought Washington D.C. to a standstill. The federal government began to vilify them as “trouble makers” who were costing the exchequer $1 million in damages every single day. City dwellers and commuters in Washington too looked upon them in disdain. However, public opinion on these protesting farmers altered dramatically when on February 22, 1978 a blizzard hit Washington D.C. and the entire city was covered with a thick snow sheet. Farmers came to the rescue of citizens.  With their tractors, they ploughed out hundreds of cars and aided many stranded citizens. They helped to transports doctors and nurses on duty. Women farmers volunteered to prepare meals and clean hospital wards in the absence of regular staff. They won the hearts of the locals and their sympathy.

After weeks of protest, the Jimmy Carter government gave verbal assurances to farmers against foreclosures and promised them more equitable prices for their produce in future.  Farmers left the city.  However, these promises proved to be shallow and farm foreclosures by banks started again by 1980. Many small and medium sized farmers were bankrupted and forced to leave agriculture altogether. Statistics reveal that between 1948-2018, four million small farms in the US disappeared, while the number of farms with 2000 acres of land and more proportionately doubled during the same period. Today, there are 250,000 factory-run farms in US, which account for 51 percent of the total agricultural production in the country.

In the ensuing years,  there was vast transfer of wealth and farm profits from small and medium farmers to large agri-business corporations. These corporations started controlling the entire supply chains from “farms to forks” and agricultural production lines began to be dictated to suit their profitability. These large corporations also began to control manufacturing demand, to the detriment of small business owners in rural communities. As a result, local seed and equipment suppliers in villages were forced to close shop. Over the years, agricultural communities and farming as a way of life has become almost extinct in US.  It remains but a romantic ideal in films, songs and books.

During the past four decades little economic gains have accrued to small and medium growers. Their situation continues to worsen every year. According to the estimates provided by the US Department of Agriculture (USDA), farming debt is at an all time high at US $416 million and half of independent farmers in US are in debt today. At the same time, the median income of small farmers in US is minus $1553 a year as these farms are no longer profitable and incurring mounting economic losses every year. Shattered by the loss of their incomes, homes and livelihoods, many small farmers in US have resorted to suicides. Centre for Disease Control and Prevention in US has estimated that the incidence of suicides among farming communities is 1.5 times higher than the national average. 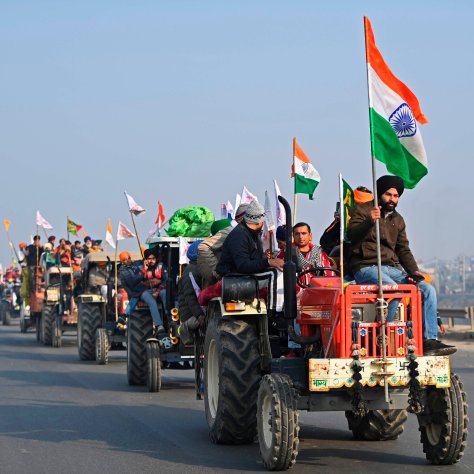 Forty-three years later, the Indian farmers camping outside the borders of Delhi fear the same fate. The new farm laws introduced by the government of India are rooted in unfettered corporatization of agriculture, without giving any legal protection to farmers in the form of assured prices. Farmers regard these laws as draconian which will expose them to the vagaries of market forces and their interests will be compromised in favor of large agri-businesses. Indian farmers carry with them years of economic distress and uncertainty. Despite contributing to 19% of India’s national income and employing more than 50% of India’s labor force, agriculture continues to become less viable as a source of living with every passing year. In Punjab, regarded as India’s breadbasket 72% farmers remain in debt. They are apprehensive of private markets and concerned that without adequate government protection their already meagre income would be further eroded.

In spite of the massive farm protests, the Indian government continues to support its farm laws vehemently, on the grounds of profitability and efficiency. It must learn from the US experience, which it seeks to replicate. Altruism needs to be a defining objective of policy planning. National governments cannot compromise on equity for the sake of profitability.

Nadia Singh is a lecturer in Economics at Northumbria University, UK.