Umm Nabil al Kurd is 82 years old. She is tiny and frail – her hands tremble as she takes the mike. But her voice is steady as she describes how she lost her home.

“We came to Jerusalem from Haifa as refugees in 1948” she says. “The Jordanians allotted us our house. We have lived there for 60 years – my children were born there. It was small and broken when we moved in – we extended it and improved it as our family grew. We planted a garden. When my son got married and the grandchildren came, we built a separate unit for him at the back of the main house. We built with our own money, with our own hands. Then, two years ago, the Israelis came with the police and told us to leave. They said the house was theirs. They pushed me to the ground, called me filthy names, turned their dogs on me. They threw out our furniture and moved into the house. We went to court but the judge said we were occupying the house illegally – he told us to pay 100,000 shekels as rent for the years that we had lived in the house. We had to pay – my husband would have been imprisoned if we did not. We are still fighting the case – the next hearing is in July but I don’t know if we will ever get the house back.” END_OF_DOCUMENT_TOKEN_TO_BE_REPLACED

[In September 2012, Aditya Nigam and I had the incredible good fortune to visit Palestine. This post is the first of a series in which we reflect on our experience and what we learnt there. We stayed in Ramallah, visited and interacted with colleagues at Birzeit University and spoke at a conference organized by Muwatin, a research institute based in Ramallah. We met  a large number of inspiring people who pushed the frontiers of our minds, and we came away humbled and moved by the dignity of a people living through the brutal occupation of their lands by the  Zionist state of Israel, with limitless courage and sense of humour intact.

Deepest gratitude to Rema Hammami of Birzeit who drove us around Jerusalem, and whose inimitable commentary gave us a live historical sense of  her country.

Words are inadequate to thank our friends Magid Shihade and Sunaina Maira, whose passionate love of Palestine and determination to help us make the most of our brief stay there, expanded our horizons continually.]

On the 15th of May 1948, the state of Israel was born, dispossessing Palestinians who had lived on that land for centuries. Fleeing terror and genocide in Europe, and anti-semitism globally, Jews from all over the world poured into Palestine.

Why Palestine? Why was Palestine given to the Jews as their home? And whose property was Palestine, that it could be given away? Why were people who had never done any harm to the Jewish people made to pay the price for European anti-semitism? It was Germany and Italy and Poland that had in fact, run concentration camps; it was any number of other countries of Europe that could boast of centuries-old histories of violent anti-semitism. Why were not parts of these countries carved out to make a country for the people they had wronged? 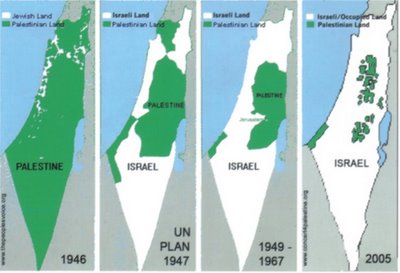 Maps showing the gradual obliteration of Palestine by Israel