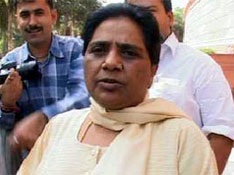 Please read this very important post on the CNN IBN website’s otherwise dull blog section. It has been written by Hindol Sengupta who covers fashion and suchlike for them. His point is that he can’t relate to Mayawati, and finds it ironic that the “backbone of the knowledge, entreneurial [sic] economy” should be a “non-vote bank”. He says that his class of people, his ‘type’ – People Like Us, to use a cliche – “rejoice every time Manmohan Singh takes stage” but alas, even he couldn’t win a Lok Sabha election from South Delhi.

The reason why I think it is an important post is that unlike most other PLUs, Sengupta makes no claim to ‘objectivity’. When Youth for Equality / United Students / other ‘anti-reservationists’ oppose reservations, and speak about Dalits/OBCs, they claim to be doing so with a claim to ‘objectivity’, that is, they do not admit that the viewpoint(s) they are putting forward are of a certain section of society that is influential in shaping public opinion despite being in a minority.

Sengupta admits not only his discomfiture with a democratically elected Mayawati but also that his discomfiture stems from his background, from who he is. He describes himself and his ilk as “middle-class, educated, metro-bred, Christian-education raised, young.” That would abbreviate into MEMCRY, but let’s just use the word ‘yuppie’.

Sengupta’s ‘realisation’, though, is an incomplete one. Except for a passing reference in the last paragraph, he does not mention that the distance between Us and Them is in great measure that of language. Conversations on class, social mobility and suchlike these days seem to forget the Hindi/English divide. It has been left to Kancha Iliah and Chandrabhan Prasad now to remind us of it.

Unfortunately the realisation of his being a PLU doesn’t go too far. But the honesty does extend to his class bias: his problem with Lalu having a buffaloes in his backyard and on Mayawati he writes: “But forward planning? Infrastructure ideas? Modernity? Mayawati, alas, is the quintessential behenji.”

So what about Lalu’s success as railway minister? Could it be that Mayawati hasn’t been able to work on development because she’s not been in power for more than two years collectively in three terms? Could it be that Mayawati’s Ambedkar Villages scheme has made the ceiling fan finally whirl in a few villages and allowed a few Dalits to gather the courage to go to the police station and file an FIR against the men who raped their daughter? Could it be that the Dalit-Brahmin alliance by Mayawati could force a Brahmin or two to give up untouchability and accept dalits as part of the same social realm as theirs?

The questions don’t bother Sengupta because the answers don’t affect him. In other words, another area where I would like Sengupta to extend his realisation to is middle class self-centredness. The middle class cares only about itself, the rest may go to hell. If this is true even in perception, that is bad enough.

I also hope his realisation will sooner or later extend to adding the phrase ‘upper caste’ to MEMCRY. After so much heat on reservations, are the yuppies still blind to the fact that PLUs are exclusively upper-caste? Whether its is by design or default that the middle class is predominantly (if not exclusively) upper caste is arguable. Whether this should be changed by improving the quality of primary schools and/or by reservations in higher education, is debatable. But no one can dispute that the Indian middle class is composed of the upper castes. Yet they choose not to admit this. Sengupta honestly admits that his convent education, metropolitan upbringing, class status are the causes of his dismay (and ‘fear’!) over Mayawati’s victory. I wish he’d extend this honesty to admitting that his caste is responsible in the first place for his MEMCRY yuppie status.

Kumari Mayawati, Mulayam Singh Yadav, Ram Vilas Paswan, Lalu Prasad Yadav and others of their ilk are symbols, literally, of the political assertion of those below the middle class. The logic of such political assertion, according to Sengupta, is:

It’s the same logic that kept Lalu in power, that allowed him to argue that development is nothing. He brought something more to his voters – he was one of them, and for those who had been oppressed for centuries, to see one of them in power, to see a CM who kept buffalos in his backyard was intoxicating. It was a real sense of power. No roads or electricity could beat that.

If Sengupta roots for Rahul Gandhi and Priyanka Vadra just because he can relate to them, why shouldn’t those not fortunate to have his MEMCRY yuppie status not vote for leaders whom *they* can relate with? If “those who had been oppressed for centuries” (as if they aren’t anymore) can enjoy a “real sense of power” by having one of their ilk in the CM’s chair, then should we conclude that Sengupta and the yuppie class he represents also wants the same venal pleasure by seeing people of their ilk in power?

Sengupta’s understanding of caste politics – that the lower castes, the ‘oppressed’, vote for People Like Them for a sense of power – is to miss the wood for the trees. Indeed, if you ask Dalits in a remote village in eastern Uttar Pradesh (as I did in the middle of February this year) why they vote for Mayawati, they will actually say that they do so because she brings them dignity, because she is one of their own. In the mid-nineties Mayawati used to say in her rallies, “Main Chamar ki beti hoon. Main Chamari hoon, main tumhari hoon.”

But the reason why Dalits feel the need to have one of their own in power is because they think that only then will they have the roads and electricity they need – something Sengupta suggests foreign-educated Rahul Gandhi will deliver better than someone like Mayawati who has risen from a village and knows what it is like not to have roads and electricity. The “knowledge, entreneurial [sic] economy” Sengupta says MEMCRY yuppies are the backbone of, it doesn’t exist in most of the Hindi heartland.

In one village I went to near Allahabad, there was a road going to a Brahmin basti, one to a Srivastava basti, but not one to a Dalit basti. The residents of that Pasi (a Dalit caste) basti told me that this was plain discrimination because of their caste. And they voted for Mayawati for her to change that. They voted for her again and again in the hope that some day she’ll get full five years in power. (I thought it was quite remarkable that in a Dalit basti in a village they knew of the five year system!) If they see Mayawati not delivering the goods, they will stop voting for her one day. Just like they stopped voting for the Congress that produced the Rahuls and Priyankas but not roads and electricity in villages.

An office colleague, who despite having done his customary duties at the JNU elections can be counted as a member of the MEMCRY yuppie class, told me that his Brahmin parents in urban, BJP-voting Lucknow enthusiastically voted for the BSP. Growing up in Lucknow myself, I learnt less about the non-existent ‘Lakhnavi tehzeeb’ than about Dalit-OBC politics because it was all happening before me. The day La Martiniere College shut down to allow a Samajwadi Party rally on its grounds was, in retrospect, a remarkable day when heartland politics was able to interrupt a middle class factory.

But so many years of living under Maya and Mulayam has taught Lucknow’s and Uttar Pradesh’s middle class to live with it. And love it. If my colleague’s parents voted for the BSP, and Brahmin lawyers like Satish Chandra Mishra are suddenly becoming aware of their Brahmin status and joining the BSP in large numbers, it speaks of a convergence of interests.

Ambedkar, and his followers such as Mayawati, wanted Dalits to “educate, organise and agitate”, capture power and then use power to open the doors of equality for Dalits. Kanshi Ram translated the idea to the masses by showing them a pen. The cap, he said, was how much the upper castes were. The rest of the body of the pen was Dalits/OBCs/Muslims (“Bahujans”). Despite being together in a majority they were being ruled by a minority o upper castes. The pen stood vertically. He said he wanted to make it horizontal, where everyone was equal. Brahmins, OBCs and Muslims voting for Mayawati and bringing her to power is exactly the fulfilment of that idea, even if politically but not yet socially.

Caste politics, Nitish Kumar in Bihar and Mayawati n UP have proved, is not stagnant. It is rather a caste *churning*. Something’s happening here. Some thing’s changing. Hindol Sengupta doesn’t need to be afraid of it. He can join it.