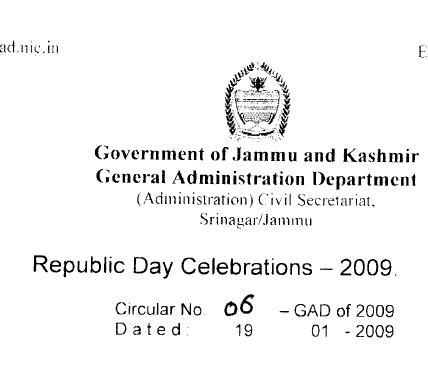 By the way, belated Happy Republic Day! Say it loud and clear brother, lest you also get an order like this one of these days! 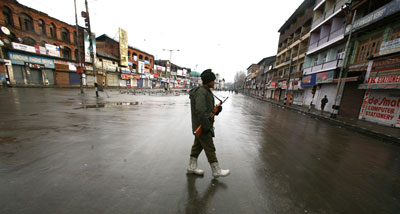 The galleries for audience were empty as people did not participate in the function.

Few school boys and girls were the only civilians seen at the function. “We are here because the school authorities asked us to participate in the function,” said Afsana, a student of a government school.

Meanwhile, the entire Kashmir valley observed a complete shutdown and marked the January 26 as a “black day”.

The markets were deserted and traffic remained off the roads. Hundreds of CRPF troopers and policemen patrolled deserted streets of the city while people preferred to sit indoors for the entire day. [Rising Kashmir]

But, in the same story:

“Earlier we used have curfew like situation (on Republic Day). Today I could see people moving freely and vehicles plying without any hindrance. There is a spectacular change this time and I praise our police officials for this.”

Since the summer government sits in Jammu, the R-Day functions in Srinagar were presided over by Minister for Rural Development and Panchayat, Ali Muhammad Sagar. Sagar said (from the same Rising Kashmir story linked above):

…it was for first time that people brought their collective representation to the State legislative Assembly. “The massive participation of people in elections is testimony to that. The poll percentage was much higher than in other states of the country. By this Kashmiris have shown the real face of democracy.”

Wasn’t 2002, that created PDP, supposed to be the first such election? The more things change, the more they remain First? And the realisation that more voted in J&K than in other states would be familiar to this blog’s regular readers.

4 thoughts on “Republic Day in Srinagar”