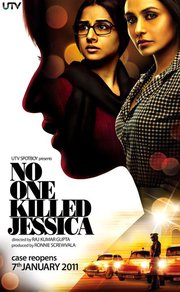 Why does No One Killed Jessica open with the execution of Jessica Lal but rush so quickly to the windswept altitudes of Kargil? And why, when she first blasts on to the screen as embedded journalist Meera reporting on the war, does Rani Mukerji look more like she’s embedded inside an SNL skit on Barkha Dutt? I let out a little laugh then, but the laughs only got bigger from there. Here is a film that knows nothing about how the media works; worse, it fails to pass off its version of the media as believable. Here are a few lessons I learned watching the film:

1. Aspiring reporters will be glad to note that though journalists generally fight tooth-and-nail at press conferences to get their questions heard, a helpful “Yaar, please, mujhe poochne do!” will elicit total co-operation and rapt attention.

2.Excited about a job in television but not looking forward to the long, boring brainstorming? Worry not. If this film is to be believed, meetings in news television last mere seconds, not the usually tedious minutes. An entire fleet of reporters is assembled to be told “Ok guys, the big story is XYZ, get to work.” Any questions about other stories are squashed with a quick “STFU” by Meera. You’d think that both messages could go on an inter-office memo instead, but you would be wrong.

3. Looking for a place to dump your 80s’ wardrobe? Enter Rani Mukerji. She barks fuck yous with contemporary flair, and covers every major event from the late 90s onwards, but at heart Meera is a throwbacker who wears while newsreading what Olivia Newton John wore when she wanted to get Physical. Fuck you, FabIndia.

Oh, woe. The one thing the film gets right is having computers flash the Windows 98 screensaver. Nicely done. Its a miracle I noticed that one detail, given director Raj Kumar Gupta’s rookie errors. Here’s two you can look out for: he has botched the intermission, which arrives five minutes before it should have, and he has squandered the chance for a Star entry by not pushing Mukerji’s story entirely into the second half. Had he gotten these choices right, we would have at least gotten an uninterrupted first hour in which to admire Vidya Balan’s intriguing (and more difficult) performance as Sabrina Lal, as well as the performances, by turns amusing and wrenching, of a gaggle of actors playing put-upon witnesses, perturbed partygoers, parents, politicians and policemen (my favorite insensitive caricatures are of Bina Ramani, who is played like Bindu in a BMW, chanting “I’m not sure, I’m not sure,” while rubbing her temples, and of Manu Sharma’s mother, who chimes in regularly to plead with her harried husband, “Mujhe kuch nahi pataa, mera Monu mujhe lauta do”).

Indeed, it’s when it sticks close to the case that No One Killed Jessica works best. But the films wants to be more: it wants to be about Power, Class, Justice. It wants to be about the Media and the Masses. It fails. Most disappointing, however, is that unlike Gutpa’s insidious debut,Aamir, No One Killed Jessica never gets under the skin, either of the viewer or of what its current radio hit describes felicitously as da-da-da-da-da-Dilli. As an essay on the the city’s invisible regimes of social capital, it falls way, way short. Gupta doesn’t really furnish a ruling vision of Delhi, and the film barely matches the insight of Band Baaja Baarat (also in theaters now, also about Delhi’s complex and intractable power grids, and also a better film).