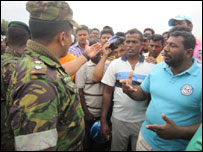 The United People’s Freedom Alliance government’s inability to put forward economic policies that address the grievances of the downtrodden sections of the Sri Lankan polity, outside the frameworks of neo-liberalism, has led to chaos in the country. The government’s move to privatize the higher education sector created a major uproar in the country last year. The academic staff attached to Sri Lanka’s universities began a trade union action demanding higher wages in 2011. In the Katunayake Free Trade Zone, garment sector workers took to the streets against a pension scheme introduced by the government much against the interest of the workers. These protests have brought to light the government’s ill-conceived economic policies, and its indifference to the concerns of the working people. Financial mismanagement, corruption at the various levels of the state, the escalating expenditure on the militarization of the North and East provinces, and the government’s sheer disregard for the fundamental needs of the people have created an atmosphere of economic instability. This situation might lead to political unrest in the future, if the Sri Lankan government continues to lack the will to salvage the economy from neo-liberalism and mismanagement. The government’s move to increase the prices of fuels has aggravated this situation.

The government decided to raise fuel prices from midnight Sunday. The latest fuel price hike, the worst of its kind in the recent past, has led to a 36.9 % increase in the price of diesel and nearly 50% increase in the price of kerosene. This increase in fuel prices brought the private transport services in the country to a standstill on Monday.Hundreds of commuters got stranded at the bus-stops dotting Sri Lanka’s roads as the private sector transport services went on strike. The price hike has started to take its toll on both the middle and working classes in the country. In the immediate aftermath of the price hike, private bus operators have raised the bus fare by 20%. The Ceylon Electricity Board has imposed a Fuel Adjustment Charge on electricity consumers with effect from midnight yesterday. This move might cause a 40% increase in the electricity bills of 78% of the country’s electricity consumers. In the plantation sector, where the majority of the people do not have access to electricity, and use kerosene to light their houses and cook their meals, this price hike will make things worse for a people who have been experiencing the pangs of poverty for decades. The rise in fuel prices has already triggered an increase in the prices of essential goods. In Jaffna peninsula, the price of sugar (per kilogram) increased by Rs. 5/-. As the cost of transporting essential goods from Colombo to distant places like Jaffna has increased in the aftermath of the hike in fuel prices, it is feared that the prices of essential goods would increase in the coming days. 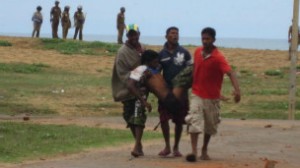 The fishing community in the country has been affected severely due to the rise in fuel prices. This community relies on fuel to operate fishing boats. The rise in fuel prices has posed a threat to their livelihood. As expected, the fishing community is among the first to launch a protest against the government’s decision to raise fuel prices. In Chilaw, a fishing town on the North-Western coast of Sri Lanka, fishermen and their families launched a protest calling for a reduction in the prices of fuel yesterday. The demonstrators from the fishing community in Chilaw attempted to block the Colombo-Chilaw highway as a mark of protest. In the ensuing confusion, the Police and the Army, which have now become the mighty arms of the Sri Lankan state to suppress people’s protests against the UPFA government’s neo-liberal economic policies, opened gunfire at the protestors. A fisherman was killed, and a few others were injured in the incident. Waves of protest have started to rock the country from multiple fronts. The fishing community in Jaffna has joined hands with the fisheries organizations in the South to protest against the hike of fuel prices.

Students from the Visual and Performing Arts University and University of Ruhuna launched protests urging the government to reduce the prices of fuels. A protest organized by the Janatha Vimukthi Peramuna, an opposition political party, against the price hike met with police brutality in Colombo when the police fired tear-gas at the protestors. The police have fired tear gas at another group of protesting fishermen in Negambo, a fishing town located North of Colombo. The protest cries arising from the different parts of the country indicate that the government’s decision to raise the prices of fuels has infuriated the public, especially the impoverished strata of the community. The rhetoric of war victory which has been raised repeatedly by the state to distract the masses from their economic woes does not seem to work in favor of the government anymore.

Revisiting the recent protests that took place in Sri Lanka, one observes a nexus between neo-liberalism and state-sponsored violence. In 2011, the military was deployed at the University of Peradeniya to threaten the undergraduates who were protesting against the establishment of private universities. A garment sector worker was killed in police brutality last year when the Katunayake Free Trade Zone workers came out onto the streets in protest. The present Sri Lankan regime uses the police and armed forces to suppress the protesting voices in the country. It is an alarming trend that state-sponsored violence and neo-liberalism march hand in hand in Sri Lanka and collaboratively undermine the democratic fabric of the country. The killing of the fisherman in Chilaw yesterday re-affirms this trend.

In May 2009, the present Sri Lankan regime brought an end to the civil war that had plagued the country for thirty years by defeating the LTTE. The government utilized the rhetoric of war victory in the South to consolidate its vote bank. The UPFA regime swept all the elections that were held in the South in the post-war years, except the Colombo Municipal Council Elections. The government’s popularity has relied very much on the war victory. In the North, the government and its allies faced major electoral defeats. The manner in which the government ended the war without paying any heed to the cries of the thousands of Tamil civilians who were being held hostage by the LTTE during the last stages of the war, and the government’s non-committal attitude towards devolving powers to the regions predominantly inhabited by the minorities have made the present regime unpopular in the North and East provinces. Instead of exploring a mechanism to devolve powers to the provinces along federal lines, and fully implementing the 13th amendment to the constitution, the President undertook a swift parliamentary process to strengthen his powers through the 18th amendment to the constitution. The anti-devolutionary stance taken by the present government and the rapid rise of the first family within the government would be detrimental to the democratic foundations of Sri Lanka in the coming years.

It is in this larger context of growing authoritarianism that the protests against the fuel price hike emerge as a significant move to challenge the government and to re-assert the importance of social justice. The solidarity expressed by the fishing communities in the North to the protesting fishermen in the South is a welcome sign in a country where nationalist politics has kept the working masses divided along lines of ethnicity. This solidarity needs to grow further; it needs to broaden its boundaries so as to accommodate the different forms of struggles taking place on the ground; it should aim at building a society on the principles of justice, equity, freedom and democracy. The protests against the fuel price hike have demonstrated that the will of the working people to struggle against injustice is still alive in Sri Lanka.