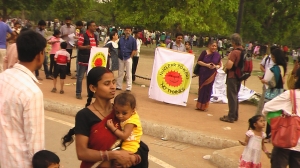 The “Urgent Appeal to the Conscience of the Nation on Koodankulam” open for signatures on DiaNuke.org was released yesterday, May 20th,  in New Delhi, Mumbai and Kolkata. Concerned people and activists are planning release events and readings of the appeal

in Chennai, Bangalore, Pune, Hyderabad and other cities in coming weeks. Grassroots organisations are distributing the appeal as pamphlet, translated in regional languages.

This Sunday, Vandana Shiva, renowned environmentalist and eco-feminist, released the national appeal on Koodankulam at the India Gate in New Delhi. Releasing the appeal, she expressed her anguish on the undermining of democracy by the Indian government in its pursuit of nuclear energy. Inviting NIMHANS doctors to ‘treat’ the mindset opposing nuclear energy projects is reflective of the nuclear-obsessed government’s contempt for its own people and their concerns, she said. 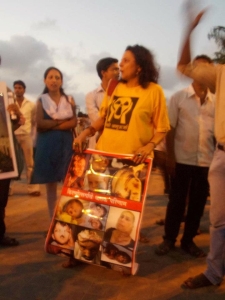 In Mumbai, famous film maker Anand Patwardhan and human-rights activist Binayak Sen released the appeal in Chaityabhoomi at Dadar. People expressed their solidarity to the ongoing struggle in Koodankulam and demanded that the police repression must stop immediately and the fabricated charges of sedition and ‘war against the Indian state’ put up against innocent local people protesting peacefully should be revoked. The government must not push India on a dangerous nuclear route without openly and democratically consulting its citizen, independent experts and concerned local communities.

In Kolkata, the national appeal on Koodankulam was released an its readings were organised in the morning 10.30 AM from Earthcare Books at 10 Middleton Street and at 5 PM from Shishu Mela (a children’s fair) at Shamil, a children’s school at Chittaranjan Colony, Kolkata. Another meeting was held at 5.30 PM at B 23/2 Rabindranagar. Jiten Nandi, Santanu Chakraverti, and other activist released the appeal and read out its Bengali translation.

b) puts a moratorium on reactor projects in the country and

c) engages all sections of Indian people democratically in a wider consultation on the expansion of nuclear energy.