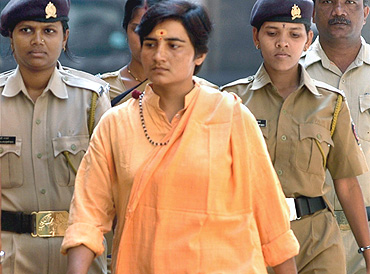 Hindus who have been accused of terrorism do not represent my religion. They are a fringe minority. All religions have bad apples. Hindu scriptures, values and traditions do not advocate terrorism and killing of innocents. The great, ancient religion could not have lived so long if it did not preach morality.

I am aware that many Hindus have been charged with terrorism cases lately. Whether or not the charges are true, we will hopefully know sooner or later. I know the wheels of justice move slowly but as an Indian I have faith in the Indian judicial system.

Last year, a court in Mumbai convicted and sentenced for ten years Ramesh Hanumant Gadkari (53) and Vikram Vinay Bhave (29) of the Sanatan Sanstha for attempting to blast a bomb each in Vashi and Thane. Just as they were convicted, I as a Hindu and as an Indian demand that all those who take to violence in the name of my religion be given exemplary punishment.

I am forced to write this article because we are not talking of one or two isolated cases but quite a few of them by now.

In February 2007, suitcases with bombs went off in the Samjhauta Express. The 68 dead were mostly poor Pakistanis on their way home, but not all of them too. The Indians who died included security personnel, who were Hindu. I unequivocally condemn the loss of each of their lives, regardless of nationality and religion, and demand that the court trial against former Indian Army officer Lt. Col. Prasad Shrikant Purohit of Abhinav Bharat be expedited.

On 18 May 2007, a mobile phone was used to trigger an RDX bomb blast inside Makkah Masjid, not far from the iconic Charminar in Hyderabad. Fourteen Indians died. This blast has also been blamed on Abhinav Bharat and Swami Aseemanand. A charge-sheet filed in court by the Maharashtra Anti-Terrorism Squad has claimed that Abhinav Bharat’s aim is to ‘propagate a separate Hindu Rashtra with its own Constitution’. In other words, they seek to overthrow the Indian state, like, say, the Maoists. It is surprising, therefore, that unlike the Communist Party of India (Maoist) “and all its formations and front organisations,” the Abhinav Bharat’s name does not figure in the list of organisations banned by the Ministry of Home Affairs.

In October 2007, there was a bomb blast at Dargah Sharif, the shrine of the great Indian Sufi, Khwaja Moinuddin Chishti. Three people died. In 2010 the police arrested five people, four of whom were said to be members of the Rashtriya Swayamsewak Sangh. Although Swami Aseemanand has retracted his confession, the confession should still be valid as it was made before a magistrate. I do not buy his argument in the confession that the bombing was to avenge acts of terrorism by non-Hindus. I do not buy this argument because nothing justifies terrorism. We can end the scourge of terrorism only if we stop justifying it, no matter who does it.

Four Indians died and 70 were injured in September 2008, when a bomb went off near a hotel at Bhikku Chowk in Malegaon, a small town in Maharashtra. The same day, a blast killed a 15 year old boy near a mosque in Sukka Bazar in Modasa in Gujarat, while the mosque was conducting Ramzan prayers. The prime accused in the Malegaon blast is Pragya Singh Thakur, a sadhvi who began her political career with the Akhil Bhartiya Vidyarthi Parishad, student wing of the Rashtriya Swayamsewak Sangh. Lt. Col. Purohit and Swami Aseemanand are also accused of involvement in the blast. As for the Modasa blast, newspaper reports say the National Investigation Agency has zeroed in on Hindutva elements for it.

If the above named and/or other Hindus were indeed behind these and possibly other cases of terrorism in India, we should stop calling them Hindu because remember, terror has no religion.

It is often said that it is because India is a Hindu majority country that it is secular. I don’t know how true this is because the world is full of Christian and Muslim majority countries that are not theocratic states. As a Hindu, I do not think the state has any business to be a Hindu state. The world is full of theocratic states with religious and sectarian strife. Just as I as a Hindu would not like to live as a second-class citizen in a theocratic Buddhist, Islamic or Jewish state, I do not want non-Hindus in India to feel they have a lesser right over this country than me.

To terrorise is to induce fear, and bombs are not the only way to do so. The end-goal of terrorism could also be achieved by mob violence. Unfortunately, there have been many cases in which fellow-Hindus have committed such violence against non-Hindu Indians in Bhagalpur in 1989, in Delhi in 1984 and Gujarat in 2002, to name only a few. It is sad that in most cases justice has been elusive. I am happy that there has been some justice in Gujarat recently, and as a proud Hindu I hope that more bad apples from my religion will be brought to justice. Particularly harsh punishment should be given to those people of my religion who provoke other Hindus to take to violence – such as four Hindu youths who allegedly hurled beef at a temple in Hyderabad in April this year, blaming it on non-Hindus and bringing the city to a tense halt. Thankfully, nobody died.

Hinduism is a religion of peace. Those who take to killing people with bombs in the name of my religion only serve to defame my religion. The silent majority of peace-loving Hindus must break its silence and unequivocally condemn these extremist Hindus who are straying away from the dharma.

(First published in The Pioneer.)