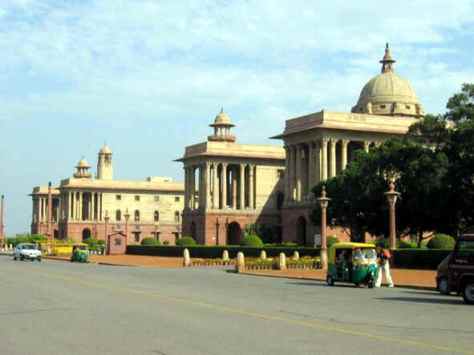 In 1988 Lutyen’s Delhi, was declared a heritage zone by prohibiting building activity within the 26 square kilometre area out of the 43 Sq. Km. area that falls within the civic control of New Delhi Municipal Committee (NDMC). A move has now been initiated to get the entire area declared a World Heritage site.

The very logic of an area being declared a Heritage Zone should preclude any interference with the layout and design of the entire zone. Non-interference also means that, future building and development activity, if at all permitted, has to conform to the original parameters of design, materials, fittings and fixtures used, building techniques, landscaping and the kinds of trees planted in the heritage zone.

Even before the 1988 freeze on construction, there was a master plan for Delhi and it clearly identified the Lutyen’s Bungalow Zone as an area where high rises were not to be permitted.

The actual violations began when this rule was selectively relaxed beginning with permission given in the mid 70s to construct the high rise Sagar Apartments on Tilak Marg. High rises like Asha Deep and Dakshineshwar on Hailey Road followed shortly thereafter.

The violations were first permitted to favour cronies of the extra-constitutional centres of powers that had emerged during the days of the internal emergency of 1975-76, a precedent was set and now bureaucrats, journalists, land-sharks, property dealers, movers and shakers of Delhi and everyone else who could pull a few strings, got into the act.

Building came up despite the Archaeological Survey of India refusing to approve locations that were in violation of the ASI rule of not permitting any construction within 50 metres of a protected monument. The biggest culprit of this violation was the DLF building, next to Jantar Mantar. Once this was allowed another precedent was set.

Heritage Conservation has now become a dead letter as far as the builder lobby is concerned. For them all old buildings are nothing more than structures that sit on high value real estate and need to be pulled down and replaced with ugly glass and concrete structures.

The New Delhi Heritage Zone has been subject to renewal, repair and restoration activities almost continuously, throughout the post independence period, even after the freeze on construction in 1988 and even after the proposal in 2009 to try to get the world heritage site recognition this endless construction has not stopped.

Hotel Fonseca on 1 Mansingh Road was replaced with Taj Mansingh, Hotel, Claridges lost its colonial look after large scale refurbishing and rebuilding was carried out.

The ITDC owned high rise Ashok Yatri Niwas and the Kanishk were built in the Lutyen’s Bungalow Zone to accommodate tourists at the time of the 9th Asian Games organised in 1982. The hotels were subsequently sold to private hotel Chains. An event of national importance becomes the excuse for fiddling with the existing laws and once the law is altered the property can be handed over for private profiteering.

The bungalow on 14 Ashok Road, for long the residence of a Minister saw large scale alterations and changes, changes the like of which have been witnessed at a large number of bungalows where ministers, senior bureaucrats, army, navy and air force top brass live or where political parties have set up their offices.

The original names of all roads have been changed; the original sign posts are also gone, replaced with ugly stainless steel frames that are neither aesthetically pleasing nor sturdy.

The traffic roundabouts that were a unique feature of Lutyen’s Delhi are all but gone. The original shrubs and trees, including the large number of fruit bearing trees, that attracted a large number of Birds, have been replaced with a range of fast growing trees that do not provide food for birds and so the avian population, hard hit with growing pollution, drying up water bodies now also suffers from an absence of food.

The recent scars on the face of Lutyen’s Delhi have come in the garb of “urban renewal” initiated in the run-up to the Commonwealth Games (CWG). Almost all the pavements radiating from C-Hexagon – the India Gate roundabout, were re-laid, the original pavements made with packed earth and trimmed with white washed Delhi Quartz were replaced with Red Sand Stone.

The iconic white pillars with their iron link chains that lined Rajpath and the India Gate C-Hexagon roundabout have now become red stone pillars. The pillars are now being painted white. Why make them with stone if you are going to paint them white? The Lutyen era black lamp posts are gone, replaced with Silver coloured lamp posts and even these do not have any uniformity of design in the entire heritage zone.

Within the 26 square kilometres of what is now New Delhi are a number of monuments that pre-date the construction of this 8th capital city of Delhi, The Madrasa of Safdarjung, The so called Agrasen ki Baoli – the magnificent step-well built during the Sultanate period, The Mausoleums and other structures built in Khairpur, now known as Lodi Gardens and the many other structures that border the limits of Lutyen’s Delhi like the many Monuments in Nizam-ud-Din, The world heritage site of Humayun’s tomb and other mausoleums, the Old Fort and the nearby ruins, the ruins inside the Golf Club etc, these are structures that have a much greater historical, architectural and cultural value than the bungalows of Lutyen’s Delhi. But these structures do not occupy the mind space of those who live and rule from the bungalows and buildings built from the first decade of the last century.

The oldest among these will not even be 100 years in 2012 while the foundation stones of the youngest structures in this pretender to “world heritage status” are being laid even as we meet here to discuss the centenary of the founding of the colonial capital.

The heritage zone of Lutyen’s Delhi is sought to be preserved for posterity, while the large number of medieval monuments scattered over the almost 1400 square kilometres are left to be pillaged and encroached upon.

A little over 50% of the 43 square kilometres administered by NDMC are sought to be preserved, while an entire heritage city, Shahjahanabad, a living heritage city, is allowed to choke and die even as builders slowly buy up adjacent properties, pull down 300 year old structures and build ugly glass and steel structures in their place.

The 4-5 acre bungalows, each with a handful of residents, are sought to be preserved while the natural heritage of the Arravalis, among the oldest exposed rocks in the world and with their own unique biodiversity, is blasted off, dug up and built over. Malls frequented by the new rich come up on land that not too long ago was home to a wide variety of Birds, Insects, Antelopes, Hare, Mongoose, Squirrels, Jackals and Rhesus Monkeys.

Bungalows and offices built not even 70 years ago and modified, redesigned, refitted and refurnished, as recently as the arrival of the latest allottee, are sought to be preserved while the Jamna that has  seen empires rise and fall and has sustained the large agricultural population of the plains surrounding Delhi for thousands of years is choked to death and its tributaries first tuned into open drains and then covered up to become Dilli Haats, Parking lots and flower markets, destroying the natural aquifers that replenished the sub soil water. All this destroyed by policies and actions, conceived and put in place, by those who do not want to leave their “Heritage Bungalows in Luteyn’s Delhi”.