From the night of July 11 when Zohra Bibi did not return home to the evening of July 16 when union minister Mahesh Sharma, member of parliament for Gautam Budh Nagar, UP met with residents of Mahagun Moderne, much has transpired. Promptly after the minister’s assurances of ‘justice’ and even retribution to the flat-owners, the settlement of tin walled shacks in which Zohra Bibi and other workers like her lived with their families was demolished the next day. Many of the ‘facts’ of the matter remain disputed – while Zohra Bibi maintains that she neither admitted to the theft of cash nor hid in the basement of the building, the allegation that her employers Harshu and Mitul Sethi harassed and detained her, confiscating her mobile phone is denied by them. Meanwhile, thirteen men, a majority of them Bengali Muslims from West Bengal, arrested from the workers’ settlement are denied bail on the charge of attempted murder on the might of three FIRs filed by residents of Mahagun Moderne and languish in judicial custody. The Noida police are yet to commence any investigation of the Sethis as required by the FIR filed by Zohra Bibi and her husband Abdul Sattar. What does this language of the riot, of murderous mobs with which residents of the swanky apartment complex took to social media with #MaldainNoida accomplish? As security cards, required by domestic and other workers to enter the gated community, were revoked for 80-odd workers under the cry of ‘ban the Bangladeshi maid’, the bogey of the illegal Bangladeshi immigrant reared its ugly head.

Some commentators have noted the naked class and caste privileges of the new urban elite that undergirds their highly exploitative domestic labor practices while also allowing their self-image of aggrieved victim to emerge. Still others have noted that the paranoia around the ‘Bangladeshi maid’ reveals how that gates of Mahagun Moderne are akin to the borders of the nation, susceptible to being breached by infiltrating Bangladeshis. The allegations that swirl around Zohra Bibi and the collective and desperate protest bravely mounted at the gates of Mahagun Moderne on July 12th by hundreds of male and female workers like her compel us to think about the daily production of hypernationalist ideas of security, citizenship and borders within urban elite homes. The quick turn to banning the Bangladeshi maid, the tweets to Rajnath Singh urging him to deport Bangladeshis from Noida, and the scouring of existing private surveillance and security infrastructures for evidence reveals a pervasive thirst for more policing and security to weed out ‘the enemy’ within.

The Indian state is clearly not the only one in the business of policing borders with increased militarized security regimes. Each time the Home Minister of State Kiren Riiju is asked in parliament what the government is doing to detect, deport, and thwart illegal immigrants from Bangladesh he refers to ever-expanding legal and policing infrastructures. The residents of Mahagun Moderne represent the public support and enthusiasm for such a security society where policing of national borders easily move into urban centers and now must be enforced within homes of the besieged urban elite. This project of a security society is zealously taken up by Mahagun Moderne residents as their civic duty, a Hindu nationalist call to arms as Bengali Muslims workers become synonymous with ‘Bangladeshi’ and ‘illegal’. It is not surprising, then, that MP Mahesh Sharma and the residents of Mahagun Moderne find common cause in their shared class interests – in the meeting he admits that it is the employers’ ‘need’ that makes them look the other way even when they might suspect their domestic workers of being ‘Bangladeshi’. Thus marked as the vulnerable ones in this equation, they echo each other in taking recourse to the language of the law against the alleged ‘impostor’, who must now defend herself despite all documented forms of citizen identity. 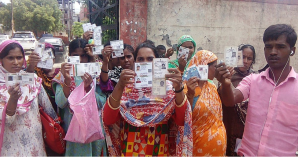 As far as the domestic workers are concerned, the possession of identity documents does not protect them from being branded as impostors, ‘Bangladeshi immigrants’, as long as they are Bengali Muslims. Hailing from the border-lying district of Cooch Behar in West Bengal, Zohra Bibi, Abdul Sattar, and countless others like them are acutely aware of the importance of documents given the daily surveillance that the Indian Border Security Force carries out under the sign of border policing. They know they must produce documents, adequate documents to establish their Indian citizenship to the BSF at the border, the police in the cities and the ticket checkers on the trains in between. However this episode starkly shows that documents do not protect equally. Once the shadow of the ‘illegal immigrant’ has been cast over you, the precarity of your status as a poor citizen is reinforced. Caught in the quagmire of ‘the illegal immigrant’ accusations, domestic workers must flash their identity documents even when it has been shown to have little purchase for disposable working poor like themselves. All this to establish their humanity as citizens of India before they can be deemed worthy of trust and dignity, basic workers’ rights including their dues. Justice is not a reasonable expectation when countered by the jingoism of national security and breached borders. Of the agrarian poor, mostly landless families, Cooch Behar has seen a steady migration of young men and families to work in construction, manufacturing, and as domestic workers across the country in the past decade. Many migrants complain that construction sites not only involve dangerous work but they are often cheated out of their monthly wages through threats of being ‘exposed’ as illegal Bangladeshis. Well aware that law enforcement agents are not their allies, they steer clear of the police, as migrant workers throughout urban India tend to. Here too, as numerous men and women have lost their jobs and banned from entering Mahagune Moderne, what will happen to their pending wages?

But surely it is not simply a sense of patriotic duty in detecting ‘illegal immigrants’ that compels residents of Mahagun Moderne to suddenly turn on those who cooked their dinner the night before. Nor is it any concern for ‘Indian’ poor as opposed to the Bangladeshi poor of allegedly illegal status. The bogey of the illegal Bangladeshi immigrant accomplishes much more. Politically welcome and rousing, it conveniently serves the need to maintain the vulnerability of the working poor, a feature of the labor market that ensures low wages and lower chances of protest. Mahagun Moderne residents do not, of course, want to ban all maids, for their everyday lives are unimaginable without their labors. To ban some of the errant ones appeases the injured privilege of these urban elites, also serving as a powerful disciplining force for other domestic workers. Unabashedly, in the absence of any regulation of this sector or the protection of labor laws, employers can threaten: beware, this fate could be easily be yours. The picture of a collective protest of domestic workers in solidarity with each other, making themselves seen and heard is thus terrifying. Not because residents truly fear for their lives to be physically attacked for private and state security services are close at hand; indeed despite the charges of attempted murder not a single resident was injured in the workers’ protest. They do fear for their way of life: the transformation of the silent, docile maid into a rights-claiming collective interrupts this supply and maintenance of fungible labor. Deployment of the language of the riot and aspersions of illegality promptly strip the workers of any such agency and break the collective.

If the flickering appearance of women as workers demanding rights is terrifying to the madams of Mahagun Moderne, it is so because of the ambivalent interdependencies that many of them spoke of plaintively in the days after the clash. Recent feminist research on domestic workers in India focuses on pragmatic intimacies and alliances between the madam and the maid that are fuelled by reciprocal dependencies and patriarchal family structures despite their class differences (Sen and Sengupta 2016). With the maid recast as a violent impostor, the fragile lines of gendered empathy are upset and tenuous nature of interdependency is exposed. The claim for rights by the women workers is seen as antithetical to the claimed benevolence of their madams. Identities of class, religion, nationality and the deeply felt middle class need to protect one’s personal security and privilege, override any possibility of an alliance based on their subordinate positions in the gender hierarchy.

Zohra Bibi’s case is not an exceptional one at all. The rampant exploitation of domestic workers is pervasive across metropolitan cities, making the naked class and caste privilege existing all around us one in which most are complicit. In August 2014, a 13-year-old domestic worker was battered and tied up by her highly educated employers in Bangalore. There was no social outrage in defence of the young girl. She did manage to draw some sympathy from the media because of her age and the abject condition in which she was found in the hospital. The support and solidarity that Zohra Bibi drew from the community of domestic and other workers and her desire to demand her rights denies her the sympathy that she would have drawn had she been alone, a docile and defeated woman. With their homes razed, family members or acquaintances jailed, and wages pending inside the gates of Mahagun Moderne, these women continue to be the threatening other.

The threatening figure of ‘the illegal immigrant’ in India today is typically embodied in the Bangladeshi Muslim male. This image from an Outlook cover story in September 2012 made clear that ‘the new enemy’, easily scapegoated in political rhetoric ahead of elections in eastern states sharing a border with Bangladesh as well as nationally, is a particularly gendered threat. In contrast to this image of the male Bangladeshi immigrant overrunning Indian cities we find Bangladeshi female border-crossers typically cast as victims of ‘trafficking’. Discussions around the lives of these female migrants in Indian prisons, brothels or in the homes of middle and upper middle class families working as domestic help however remain few and far between in public discourse. On the other hand, often a number of trafficked survivors find themselves in prison on the grounds of being ‘illegal immigrants’, charged under the Foreigner’s Act. The fear of incarceration makes Bangladeshi female workers even more vulnerable, leaving them with no options for collectivising or bargaining for better wages and working conditions.

Mahagun Moderne turns a corner in this popular stereotype of the Bangladeshi woman in India figured in pitiable terms of victimhood. If the dehumanizing discourse of ‘the illegal immigrant’ depicts the Bangladeshi male as a threatening figure meriting punitive violence, the language of mob violence and the infliction of injury on the benevolent intimacy shared within the home also transforms the female figure from pitiable victim to violent threat. Worse still, this new enemy thus named is now explicitly located within urban homes. More security, new security measures must be enforced for surveillance and policing within this intimate sphere. The safety of the Hindu nation starts in every savarna home.

Sahana Ghosh is a PhD candidate at Yale University, USA and researches, writes and teaches about gender, migration, and militarization in South Asia, especially the India-Bangladesh border.

Rimple Mehta teaches Women’s Studies at Jadavpur University, India and researches and writes on the criminalization of mobility and Bangladeshi women in Indian prisons.

3 thoughts on “Under the sign of security – Why the bogey of ‘the illegal Bangladeshi immigrant’ is so powerful across urban Indian homes: Sahana Ghosh & Rimple Mehta”