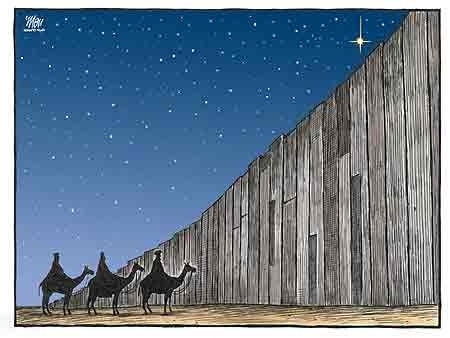 A delegation of South African Christian Church leaders has just returned from a one-week solidarity visit to the holy cities of Bethlehem and Jerusalem in Palestine-Israel. On their return, they released this joint statement [extracts]:

“Being South African, it felt like walking into another apartheid ambush. We witnessed violations of international law on so many levels – the multiple Israeli house demolitions, the discriminatory Israeli legal system, the daily intimidation of Palestinians by the Israeli Defence Forces, the Israeli Apartheid Wall and its associated regime of restrictions on movement and access for Palestinians, the imprisonment of a large percentage of Palestinians (including children), the ongoing confiscation of Palestinian water and land, the closure of previously bustling Palestinian streets and businesses, separate pavements for Israelis and Palestinians…”

“We did not expect the extent to which Israel violates international law to oppress the Palestinian people. Our exposure to the Palestinian East Jerusalem and the Israeli-Occupied West Bank was overwhelming, one which traumatised us….”

The delegation ended their statement supporting, amongst other things, “responsible” tourism to the Holy Land as well as the Palestinian people’s 2005 call for Boycott, Divestment and Sanctions (BDS) against Israel:

“We realize though that the biblical call issued by Jesus is not only to “come and see” but to “go and tell” what you have seen and heard. However, it does not end just with the latter. Further, Jesus calls us to “go and do” (act)…”

“The Palestinians [Christians as well] are asking the world for economic, cultural and other forms of boycott, divestment and sanctions (BDS) – a strategy that helped us to end apartheid in South Africa. We believe that maximum pressure must be put on Israel to abide by international law.”

Click here for the full statement, photos and further info.

Almost any solidarity with the Palestinians is vehemently opposed by the Israeli lobby who claim to want “neutrality” and “inaction”, but as Archbishop Desmond Tutu has put it: “If you are neutral in situations of injustice, you have chosen the side of the oppressor.”

MEANWHILE THERE HAVE BEEN SEVERAL OTHER WORLDWIDE BOYCOTT OF ISRAEL SUCCESSES :

1. NORWEGIAN UNIVERSITY ENDS CONTRACT WITH ISRAELI-COMPLICIT COMPANY, G4S: In a major success for the campaign against Israeli prison contractor, Group 4 Securicor (G4S), the University of Oslo has announced that it will terminate its contract with the company in July 2013. The University Director, Ole Ottersen, said: “The university wishes by no means to support companies that operate in an ethical grey zone”. G4S is a security company (operating in South Africa as well) that has an Israeli contract to provide equipment and services to Israeli prisons in which Palestinian political prisoners, including several child prisoners, are detained. G4S also provides equipment and services to Israeli checkpoints and Israel’s illegal settlements. The Israeli government has recently confirmed that G4S also provides equipment to Israel’s illegal Apartheid Wall.

2 thoughts on ““Being South African, it felt like walking into another apartheid ambush””