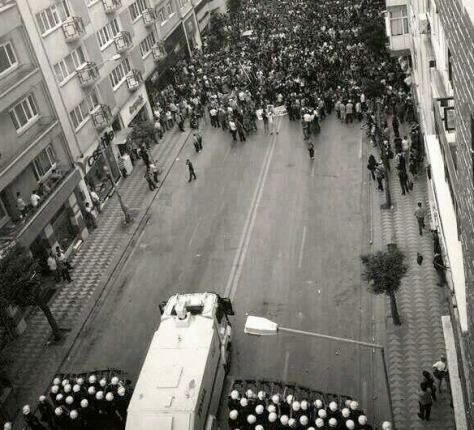 The evening of 3 June, 2013 was the first time I’d experienced the sting of pepper spray. I was walking on Cumhuriyet Caddesi near Taksim Square in central Istanbul, where, for the past five days, civilians and the Turkish police have been clashing over what the international media has called “a matter of a few trees”. Certainly, the spark of what is now a huge mass protest spanning multiple cities with over 1,000 injured, was the issue over Gezi Park, an area in central Istanbul where the Prime Minister, Tayyip Erdogan has proposed to build a shopping complex. The plan was to graze the green space and create a shopping complex. This in an area that already boasts of a Hyatt, a Hilton, a Swiss hotel and shopping centers with national and international brands. “There’s already so many shopping malls here,” said a Turkish friend speaking about the government’s decision. “Why build another?” The grazing of the park was supposed to start on Thursday, May 30th. By that time, hundreds of people gathered and occupied the park, bringing tents, books, and children. The police, in response, burned their tents and dispersed the protesters using pepper spray and tear gas.

This has caused the “matter of a few trees” to escalate into a mass protest in which children, youth, the elderly, students, shop owners, and even municipal workers have come together to protest against the police’s brutal use of force to disperse peaceful protesters. The result has been at least two deaths and 1,000 people injured. The pepper gas smell has been hovering over many parts of the country for the past five days. Ankara, the country’s capital, is a haze of smoke on television. The night of 3 June was my first experience with pepper spray, but Istanbulus have been breathing it for the past five days. Pepper gas is nothing like burning a few red chilies in hot oil: it is far more sinister and invasive. The sting in your eyes, nose, and throat make you feel like you’re choking, and it makes you want to run in the opposite direction. In Cumhuriyet Caddesi on 3 June, the people of Istanbul, however, were doing the opposite. They were walking toward the square. A young mother bent down to put on a gas mask on her small child, who was weeping from the sting. Then, she made her way toward the pepper smell, like so many other protesters.

What is surprising and unprecedented is both the  police brutality in firing pepper spray so close to residential areas, but also the spirit of the people, who are determined to stand for their rights. What stings worse than pepper spray is the attitude of the government, especially of the Prime Minister himself, who has decided to travel abroad while his country rises in protest. He has called the protesters anti-democratic. Until 2 June, the Turkish media refused to give these clashes any air time, and the irony of the situation has irked the Turkish people as much as the police’s violent suppression of their peaceful protests.

Now, the ire of the public has gone beyond the issue of the park. As one friend said, the people are fed up of the government’s tactics of suppression. For the past ten years the country has been slowly turning repressive. “The government is telling us what not to do, when not to drink and smoke,” she said. “Now, it is more than just about a park.”

Walking along Cumuhuriyet Caddesi to Taksim Square on Saturday night, it was clear that the public’s ire had moved beyond the park issue. Since Friday, 31 May, Cumhuriyet Caddesi (or Jamhuriyat Road, Cumuhuriyet is the same word in Urdu for Democracy) has been filled with protestors. Chants of “Tayyip Istifa” (Tayyip Resign!) fill the air. Youth wearing Turkish flags like capes, children beating pots with sticks can be seen in great numbers. Some shop windows are smashed. Graffiti on glass windows read: “Tayyip Istifa,” and “Hukumet Istifa,” and “Katil Police”. On the Independence Monument in Taksim Square, youngsters bearing Turkish flags launched fireworks. A circle of youth danced. Turkish flags are an indicator of an overwhelming presence of Turkish Nationalists in the movement. This presence may suggest a limitation of the movement, because the radical left sees little difference between the AKP (Tayyip Erdogan’s party) and the principal opposition, the nationalist, Republican People’s Party (originally Ataturk’s party).

Of course, there’s not a whisper of any of this in the tourist areas of the old city, where the Blue Mosque and other famous monuments lie. But as soon as you cross the Golden Horn and head toward Taksim Square, you start seeing crudely constructed barricades and roadblocks. Using bricks, stones, and aluminum planks, students of nearby colleges and universities are fighting to keep the police out. These barricades are a sign of their democracy, their will to fight for what is theirs: their city, their green space, their will.

What is so beautiful about Turkey is certainly its magnificent Ottoman past, but as of now, it is its turbulent present that consumes a large part of the city. Still, in many parts of Istanbul, citizens are carrying on with their work peacefully despite the “hooligan” protesters, as the government will have you believe. Trams and buses and metro and taxis and ferries are all running, albeit sporadically near the Taksim Square area. In the words of a friend, “this could only happen in Turkey”. What he means is that the city and its various activities are carrying on despite the protests. This is proof of the peaceful nature of the Turkish protest. It is specific and pointed in its demand, and despite bringing together people from all age groups and social groups, it aims to protest against police brutality and a hard-line government. This is the reason why one group is standing with the other, the young with the old, the middle class with the street cleaners. These protesters, far from being “drunks and extremists”, are sober and responsible enough to clean up after themselves. Late Saturday night, I saw municipality workers with their garbage trucks picking the debris on Cumhuriyet Caddesi. Would they do that if they weren’t standing in solidarity with the protesters? So, while many news websites analyse and write off the Turkish protests as not-quite-Tahrir-Square because of an overwhelming presence of upper/middle class, I would urge the analysts to wait and see.

To me, this speaks volumes not only about the unbending spirit of the people of Turkey but also to their immense love of their city. In the words of the Turkish writer Orhan Pamuk, “To be unhappy is to hate oneself and one’s city.” The Istanbullus could never be unhappy or depressed. Nor should they be accused of being hooligans/drunks/extremists. They live in the world’s most beautiful city, and they know it. More to the point, they take responsibility of keeping it so. Protesting to protect Gezi Park is proof enough.

(The writer is an MFA student at UMass Boston.)

9 thoughts on “The Jamhuriyat Road to Taksim Square: Shilpi Suneja”