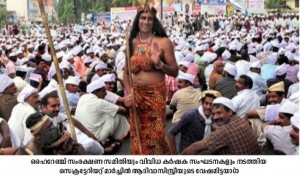 This is a photograph which appeared in the ‘Nagaram’ pullout on city affairs of the Mathrubhumi newspaper (Trivandrum edition,8 January 2014, p. III). The caption to the original photograph reads: ‘A man in Adivasi woman’s dress during the Secretariat March conducted by the Highrange Samrakshana Samithi and other farmer organizations’. The Highrange samrakshana Samity led by the Syro-Malabar Catholic Church, as is well-known, has monopolized the identity of ‘farmer’ in the hill districts and has been leading the protest against the implementation of the Gadgil Report and the Kasturirangan Report. Their rhetoric of helplessness in the face of state onslaught often leaves us blind to their history of ruthless exploitation and near-enslavement of adivasi people in these areas.No, they have never been helpless, and they never will be — the most powerful sections of civil and political societies in Kerala are on their side, as always. What else explains their hubris so well-reflected in this photograph?

I don’t know who chose this description, the ‘farmers’ or the Mathrubhumi’s reporter. Whoever that may be, from the leering smiles of the men in front, it appears that everybody had a jolly good laugh and some sexual arousal too perhaps, at the expense of the ‘Adivasi woman’.

I chose the description ‘hubris’ deliberately. Hubris in classical Greek referred to a peculiar sort of sadistic pleasure, attained through humiliating the victim, often sexually. The ‘Adivasi woman’ in this picture is straight from certain Malayalam movies which sexualize the body of the Adivasi woman; it is nothing but the soft porn imagination (a la K S Gopalakrishnan) of the Malayali new elite communities to which these ‘farmers’ belong. In the 1990s, much hysteria was evident in the Malayali public sphere over the sexualization of the Kerala Model woman, but through the twentieth century we’d seen the steady sexualization ofthe bodies of dalit and working class women, adivasi women, and coastal women especially in literature and cinema. But to think of this image being reproduced in this fashion, in a protest staged by these people to protect their rights and/or privileges in land won through the immiserisation of adivasi folk, merciless assault on their dignity, steady and determined undermining of their culture and ways of life? Of it appearing like this, utterly brazenly, after C K Janu and Mayilamma? Yes: I use the word ‘hubris’ deliberately: hubris is not revenge; it is ill-treating the other, often sexually, just to establish one’s superiority. And hubris means a disconnect with reality and the present, often deliberate: these people clearly are telling us that they are unconnected with the present in which adivasi struggles for self-reassertion and voice are a reality.

Who will chop the tree of hubris? It may be true that the Gadgil Committee Report will not remedy the marginalization and dispossession of adivasis in the state. But I am tempted to say: if its implementation will chop the tree of hubris that has sprouted, as we say in Malayalam, from the asses of shameless folk, it will be an excellent thing indeed.

One thought on “Who will chop the Tree of Hubris?”