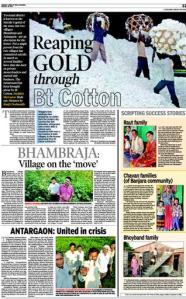 The Times of India did not hear of any dead people because Monsanto paid for the taxi from the city to the village for its reporter. Or is that all that Monsanto paid for? P Sainath in The Hindu:

The 2008 full-page panegyric in the TOI on Monsanto’s Bt Cotton rose from the dead soon after the government failed to introduce the Biotech Regulatory Authority of India (BRAI) Bill in Parliament in August 2011. The failure to table the Bill — crucial to the future profits of the agri-biotech industry — sparked frenzied lobbying to have it brought in soon. The full-page, titled Reaping Gold through Bt Cotton on August 28 was followed by a flurry of advertisements from Mahyco-Monsanto Biotech (India) Ltd., in the TOI (and some other papers), starting the very next day. These appeared on August 29, 30, 31, September 1 and 3. The Bill finally wasn’t introduced either in the monsoon or winter session — though listed for business in both — with Parliament bogged down in other issues. Somebody did reap gold, though, with newsprint if not with Bt Cotton. [Full story]

Why do people read the Times of India when we know it tells us lies that corporations pay it to tell us?

Where do the defenders of the free market disappear when stuff like this comes out?