A tree with deep roots, if uprooted and planted in alien soil, might live but often sans its vigour. The same can be said for refugees. A couple of weeks ago, along with a bunch of my classmates, I visited the refugee camp of Burmese Rohingya Muslims at Kalindi Kunj in the vicinity of our university campus. The visit was part of an initiative to help them with old winter clothing after hearing about the unliveable conditions of the camp. 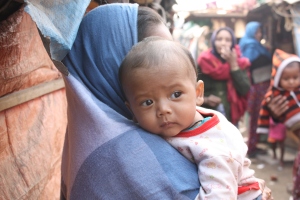 The Rohingyas, an ethnic group hailing from Myanmar (Burma), chiefly from its Rakhine (Arakan) State, happen to be one of the most oppressed people in the Asian sub-continent.

Persecuted on grounds of their faith, they are deprived of the most basic of human rights – the right to travel, the right to hold property, the right to access markets and medical aid, the right to marry (allowed only upon payment of a hefty ‘marriage tax’ to prevent their numbers from growing – that’s the contraceptive devised by the Buddhist majority; a form of ‘ethnic cleansing’, if you please), the right to possess communication technology, the right to run businesses and the most humble and essential of all, i.e., right to live a life free of threat. The crime that fetches them all these ills is very harmless – it is simply ‘existing’. The Myanmar Government has denied them the rights of citizens through the 1982 Legislation, under which Rohingyas have been excluded from the list of ethnic groups eligible for citizenship. They are labelled as ‘Bengali Muslims’ who they believe were brought in the by the British and hence, not natives of Myanmar. Sectarian animosity seeks to exterminate them from the country and the latest exhibition of this was the 2012 Rakhine State violence that forced an exodus as well as internal displacement of Rohingyas. Many of the Rohingyas fled to relative safety in neighbouring Bangladesh and India. Some have inserted themselves into the interstices of Delhi, in areas like Nizamuddin and Vasant Vihar, and others have proceeded further to U.P, Haryana, Jammu, etc. Some have settled on the relatively invisible and porous border between Uttar Pradesh and Delhi, at Kalindi Kunj. To this camp of refugees, life in an alien country and on the fringe areas of its capital city is preferable to all that they have lived through in their native country. Mohammad Khaleem, a resident of this camp narrated some of the misfortunes that struck him for being a Rohingya. His father was pierced with nails and given electric shocks when the authorities got a whiff of his plans to flee to India.

Khaleem’s mother died of shock upon hearing of her husband’s torture and death. Orphaned as a seven year old, now thirty year old Khaleem tries to piece together a living for his family of five by working as a junk dealer. The yields from this work are just what can avail them enough food to stay alive. Upon being asked whether he would like to return to his land and his people should things improve, he simply said “These campmates are all my people and they are all my family now.” Halima Khatun broke down recalling details of her life. With her husband and two sons murdered in Burma, seven- months pregnant Halima took refuge in India more than a decade ago. She shudders at the idea of going back. Here, she lives with her eleven year old son, who is about the same age now as her sons who were killed while at school. School is a place that children at this camp are unfamiliar with. Most of them look too small for their age, due to under nourishment and disease. Over fifty families live in tiny shanties on land given by the Zakat Foundation. There is no provision for potable drinking water, no sanitation facilities either, which is particularly grievous for the womenfolk. The camp area is a low-lying piece of land that turns into a snake infested swamp during rains, which claimed the lives of three children this year. In this bitter cold winter, the people burn tyres and junk they find for some warmth.

Another aspect of the Rohingyas’ struggle has been to be recognised as refugees by UNHCR (United Nations High Commissioner for Refugees), something that has finally been achieved after years of trying. Sadly, this refugee status is not officially recognised by the Indian Government. India neither has a special law pertaining to refugees, nor is it a signatory to the UN Refugee Convention, 1951 (appended to the 1967 Refugee Protocol). Hence the Rohingyas continue to suffer due to the differential treatment meted out by India to refugees of different countries, as deemed suited to its political and diplomatic interests. The location of the camp land on the Delhi-Noida border areas ensures that the faintest shadow of development work approaching the settlement stays mired in bureaucratic apathy. Further, the threat of additional displacement is ever-present, as attempts by various quarters to evict them periodically start gaining momentum. The situation of these refugees, both past and present, is unnerving, to say the least. All they could recall from their previous lives were gravest forms of persecution – torture, rape and seeing loved ones get murdered. Their situation as refugees instinctively evoked a contrast with the happy details narrated by my grandparents of life in pre-Partition Punjab. Although that world doesn’t exist anymore, it has always been joyous for them to revisit it even if only through the figment of memory. My Tibetan friend, who worked relentlessly for this initiative, is still hopeful of a free Tibet and a life of normalcy. But the Rohingyas’ tale is peculiar. There are neither good memories nor hope. The changed regime in Myanmar has done nothing to let them subscribe to hope, the lifeblood of existence. To be refugees with scant means in an unwelcoming land is difficult. But to have no fond memories of your native land and no longing to go back to that former life is indeed a cruel misfortune.

As I emerged from the settlement at the end of our visit, I met three year old little Mashooq playing barefoot in the mud wearing nothing save an unzipped ill-sized jacket. As I zipped it up for him, he smiled disarmingly and stared at me. In those warm brown eyes I saw the possibility of hope being planted. I hope we don’t lose that opportunity. I would consider our initiative thoroughly futile if we only think back about these people as another set of less privileged humans who co-habit this world. I shall be even more deeply distressed if the readers shall but just grieve about the Rohingyas’ situation for a miniscule moment of their lives, before something else hijacks their train of thought. If Mashooq has to see another winter of struggle in such deplorable conditions, or his parents have to worry about staying alive in a scorching Delhi summer or fear losing him to snakebites in the monsoon; if he and his fellow kids do not find themselves availing education like our kids, siblings, nieces and nephews, if his mother cannot access even the most basic sanitation facilities, if his family cannot afford proper nutrition, if they face the threat of being thrust into a ghetto and continue to live as a stateless, unwanted people; we shall all be stripped of the privilege of being called humans. If we do nothing to make their lives a little more liveable, we shall have failed as a society, a city, a country and as human beings blessed with abundance.

8 thoughts on “Ruins of the Living: the Rohingya Refugees: Akshita Nagpal”