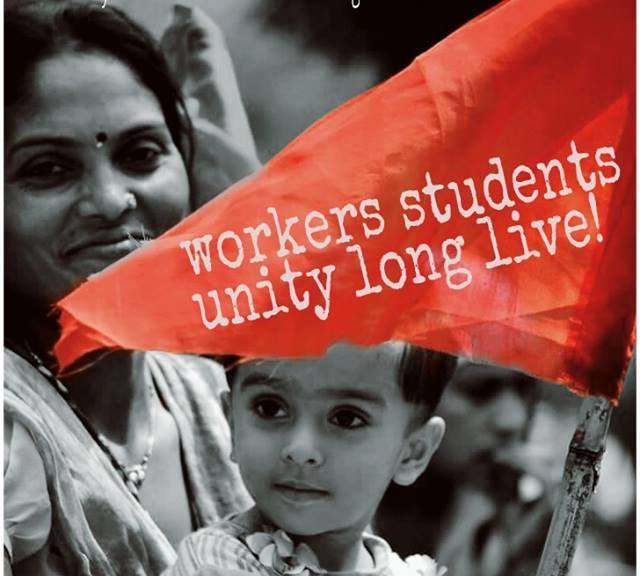 Exactly nine years back, in 2007, ten students were rusticated (again) in the month of May for their “crime” of agitating along with workers to ensure the legally mandatory minimum wages for the workers here in JNU. It was the peak of summer, the time of holidays, and the administration (like this time, like every time) thought that they could break the unity of the workers and students with crackdown timed to coincide with what was thought to be the ‘weakest’ time for mobilization on campus. The administration’s plans did not bear fruit then, they will not work now either.

We are in that strange time again. The summer of 2016 has witnessed a May Day wherein the workers in JNU not only took out their own rally, but also rallied with us students sitting on the 4th Day of their Indefinite Hunger Strike against administrative crackdown on our democratic spaces. 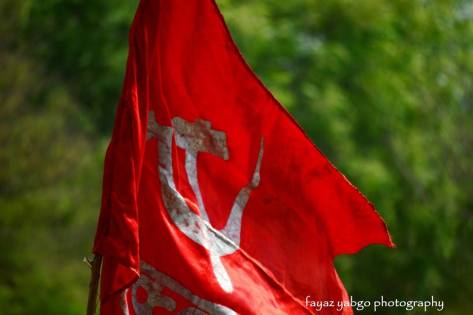 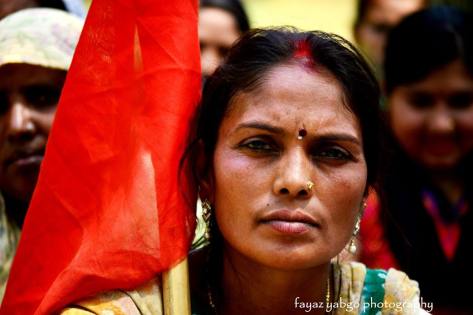 The combined forces of teachers, students and workers in 2007 not only ensured that the rustication orders had to be withdrawn, but more importantly, this historic struggle for the first time ensured the disbursal of minimum wages in this campus. The unity that the Freedom Square in JNU witnessed today in 2016 can only sound ominous forebodings for those who sit in the pink palace (the Vice Chancellor’s Office). For us, it signifies the rumblings of a simmering summer of resistance ahead.

For us, #StandwithJNU has always meant standing with the oppressed, with the workers. With all workers. With the women workers – sales women – employees of Kalyan Silks in Kerala – who were not allowed to sit during  10-12 hours long shifts. They were not even given toilet breaks and were regularly harassed in the name of being “frisked” by male guards at entry or exit. The ‘Nilpu Samaran’ or the struggle for the Right to Sit by these women workers for more than 100 days finally not only ensured the provision of stools to sit upon, but also payment of salaries during the strike period. For us, Stand with JNU has meant to stand by their Right to Sit.

It has meant standing by and with the demands of the workers of our own campus – the sanitation workers, mess-workers, the maalis, the security guards. Our struggle against the non-payment or “irregularities” (just another name for exploitation) in the PF, ELCL and over-time bonus continues.

We continue to stand with the struggle against denial of maternity leave; denial of crèches; denial of the responsibility of employer in case of health hazards at work; denial of basic safety provisions like gloves, boots, and so on.

To be aware of the caste factor coming into play most prominently for instance between the (dominant caste) mess workers and the (oppressed caste) sanitation workers is also part of the struggle as are the devices to dislodge Brahmanism.

With each of our struggles we strike one blow after the other upon the nefarious administration-contractor nexus that is designed to exploit, steal from, and harass the workers under its clutches.

The arbitrariness, illegality, corruption, nepotism and absolute unaccountability that defines this system is astounding, and what is more astounding is the fact that outside JNU, where students movement is relatively weak or absent, the conditions are much worse. One of the resolves for this May Day, as on last May Day and the year before is to break this contractual system altogether. But not much has been achieved in this regard.

On several occasions off late, the administration has issued official notices warning students not to meddle with the management of workers, but of course to no avail as we have continued to Stand with not just campus workers but also the workers of Maruti, Honda, sanitation workers and the workers’ bastis. (However, why we have failed to stand with or connect with the sex workers yet is a question the Left needs to answer). Far from the events of 9th February per se, it is this political acumen of making connections with the workers’, farmers’, Dalits’, women’s, adivasis’ struggles or that of the oppressed nationalities – that invited the wrath of the powers that be. And hence the fascist assault on JNU.  At another level, it is precisely these connections that has saved JNU – that made a vast section of people to stand with JNU. The May Day Rally reaching the Freedom Square today at the struggle site signifies the strength of these connections.

Amidst the red flags and the spirited sloganeering, Urmila didi and Anju didi (two vocal workers active in the workers’ union) expressed their unflinching solidarity with their brethrens  all over the country who despite lathi blows, detentions, brutal totures and arrests have continued to resist the exploitative labour regimes and high-handedness of the ruling elites. Anju didi started her speech wondering as to why the workers in the so-called “progressive land of JNU” have no holiday even on a May Day!

With no sick leave, erratic PF disbursal, no overtime bonus and above all, a highly ruthless contractual system, she reminded her colleagues and the students here that we have a long battle ahead with the management. She, expressing solidarity with the hunger strikers, also apprised the students that their struggle against the fascist diktats of this administration is not different from the struggle of the workers against the administrative high-handedness.

Both Urmila and Anju didi appealed to the workers to come out in large numbers in the coming days and organise programmes in solidarity with the students who they believe are being penalised for their resolve to fight for the rights of the oppressed and the marginalised. They condemned the administrative action against the student community of JNU and promised to be a part of their protests in the coming days. The workers representatives were fully convinced about the need for the workers to stand up for students’ rights this time in order to preserve the comparatively progressive space of this university and before winding up their speeches both of them reminded their colleagues that unity amongst the workers and students is the need of the hour to fight back against the JNU administration. They added as few cautionary words that generally its not the authoritarian administration or adversary that finally breaks us, what mostly break from within. We need to avert such possibilities and fight unitedly against the administration.

[Shweta Raj, JNU Student, one of the Hunger Strikers, speaking at the Worker-Student Rally]

The representatives of JNUSU and other students on hunger strike who spoke after the rally also spoke about the need to forge a larger solidarity between students and workers at a time when this fascist regime at the helm is turning all our factories, jungles and classrooms into jails for daring to stand up against their might. The students spoke of how the attack is always on the most oppressed, the least priviledged; a case in point being the hounding of the adivasis in Chattisgarh’s mineral rich Bastar where the state is planning to mount air strikes to oust the tribals so as to loot the mineral resources. The definition of an “anti-national” is one who is fearless enough to stand up for the rights of the oppressed, one who is fearless to take on the might of this oppressive feudal system. The students while condemning the disruption by the ABVP lumpens who started playing songs in loud speakers to disturb the May Day programme also reminded the workers that the worker-student solidarity is the need of the hour to not just fight the right wing forces, but also for the larger democratisation of the society and to create a better society.

Today fascism is tightening its grip everywhere. On the one hand it oppresses through its brahmanical-Hindutva-communal face. On the other hand, it has the weapons of neo-liberalism, privatization and contractualization. And the two dovetail each other. At the same time when the witch-hunt of JNU was at its peak and as hogging the media, hardly anybody cared to report about the brutal crackdown on the striking Honda workers. Just like people were being nabbed randomly for even “looking like JNU-ites”, workers were also similarly rounded up under suspicion of they being the “troublesome” Honda workers.

We also took this opportunity to express their solidarity with workers everywhere. Here are a series of portraits of the students on hunger strike, expressing our support to the imprisoned workers of the PRICOL factory in Tamil Nadu, with a post card campaign.

As we celebrate May Day, remembering the Haymarket martyrs fighting for a eight hour day, even on this date 147 Maruti workers languish behind bars. The courts while rejecting their bail petition noted that “foreign investors are likely not to invest money in India out of fear of labour unrest”. The economic crisis necessitates an intensified loot in the semi-colonies. And hence at the behest of the MNCs, even the basic constitutionally guaranteed right to unionize and organize has been sacrificed at the altar of foreign capital by our “nationalist” government.

The fact that the proponents of the most ruthless anti-labour regime also has the biggest workers union of the coutry – the Bharatiya Mazdoor Sangh – is cause for despair and introspection.

It certainly is. But there is also hope in the streets. The riveting image of the women textile workers of Bangalore expressing their rage on the streets; the contract workers in Mumbai collecting money for the ongoing agitation in JNU; or the workers’ rally today culminating at freedom square – all give hope. They strengthen us on our resolve that we’ll accept no fines, no evictions, no rustications and no out of bound orders as we have committed no crime. We’ll fight back. 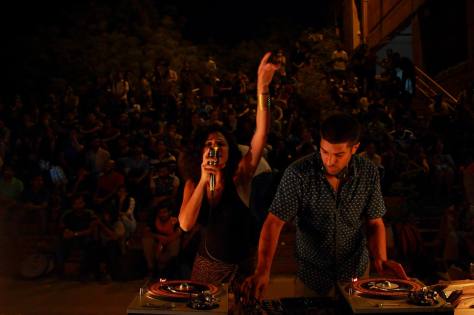 [ As the evening turned to night, ‘Azadi/Freedom Square’ in JNU lit up, became festive. May Day, the festival of the working people of the world, was celebrated with music, laughter and a big burst of joyous sound. Scavengers, and the Bass Foundation Roots Sound System, got their big red speaker pyramid to ring out the sound of freedom. A hunger strike, worker-student unity, and one big party to call it a night. A bunch of woebegone ABVP stragglers, looked on, without joy, while the sheer majority of JNU Students smiled, jived and lit up the night. Kafila]

If there are slogans, there must also be dancing !

4 thoughts on “Workers and Students Unite on May Day in JNU: Aswathi Nair & Umar Khalid”