The outpouring of solidarity and generosity on the JNU campus, since the attack of 5th January 2020 has been overwhelming.

Hostels have organised guerilla dhabas at Sabarmati. They have sung revolutionary songs while making pans of maggi and distributing jhal muri and peanuts.

Men from the hostel that distributed peanuts, worried about the mess of the peanut shells at our hostel entrance, even offered to sweep up the place, brooms at the ready.

During and after the events of the 5th, neighbours have become friends.

Our teachers have been coming to meet us every day. Some have brought bags full of snacks. Some have organised trauma sessions for us. Some have just held us.

And tonight Brahmaputra hostel organised a Sadbhavna mela for the campus. Free snack stalls all around, dholak music to dance to and a large Lohri bonfire.

As some of us women from Sabarmati were walking back towards Ganga dhaba tonight, discussing how this is the first time our hostel has no Lohri celebrations, the men from Kaveri stopped us to offer popcorn from their Lohri celebrations.

JNU was home, is home, and will remain home. 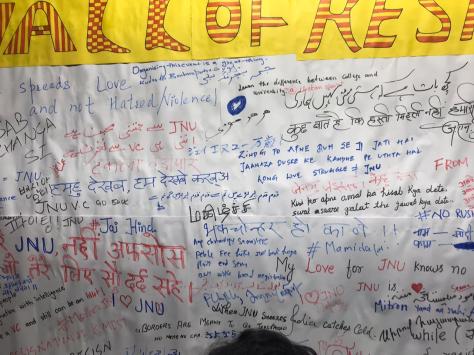 Wall of resistance at Brahmaputra 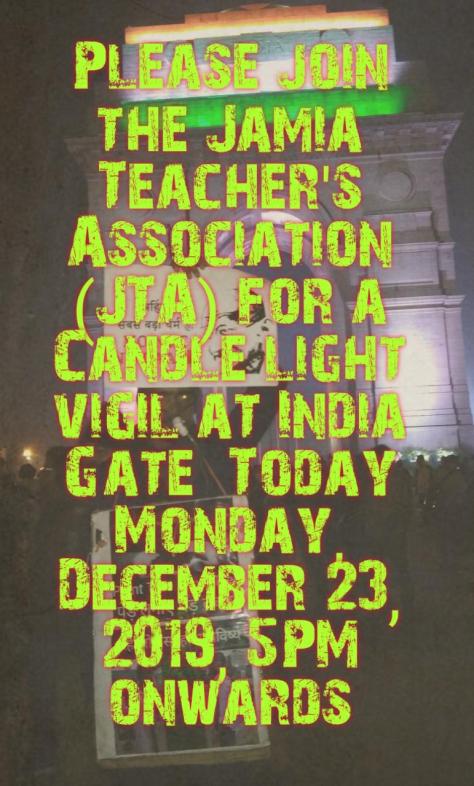 As Jamia Teachers Association calls for a candelight vigil at India Gate TODAY at 5 pm (December 23, 2019), we are publishing an earlier Facebook post by FAIZ ULLAH on Jamia written soon after the police violence at the university during the anti-CAA protests there.

Dayaar-e-shauq mera is the anthem of Jamia Milia Islamia. Translation of the lyrics at this link.

Jamia Millia Islamia for me, and many like me who grew up in the small neighbourhoods around it, is not just a institution of higher education. It is our nursery, our playground, and where we came of age. My family moved from Bara Hindu Rao to Jamia Nagar area in the mid 1980s because my father thought living in the vicinity of an educational institution would be good for us. I am not very sure if the anti-Sikh violence of 1984 Delhi was a decisive reason for him to move us to a place he thought would be safe, but looking back I think he did kind of foresaw the shape of things.

Over the next couple of decades my elder brother studied History, My sister Social Work, and I, Mass Communication at Jamia. My niece will graduate this year from the same university in which her grandfather also enrolled for a while for his fourth degree – he had to drop out in the first year because he was already running a small primary school with my mother and practicing law on the side.

My brother was active in the students’ politics circles and served as the joint secretary of the university’s students’ union. This often translated into arguments between him and my father, not over his politics but that he would be too involved in it and would disappear for days without any information.

END_OF_DOCUMENT_TOKEN_TO_BE_REPLACED

The following is a statement from the alumni of NLU Jodhpur, in solidarity with the students at the receving end of police brutalities in Delhi, Aligarh, Assam and other universities.

We, the undersigned alumni of National Law University, Jodhpur unequivocally condemn the police excesses in response to student protests at Jamia Milia Islamia University, Delhi University, Aligarh Muslim University, Dibrugarh University, Gauhati University, Cotton University, Assam and other universities across India. As persons with training in constitutional laws and values, we recognize the significance of dissenting speech and assembly, and the need to preserve academic spaces as free from State coercion and militarization and to uphold the values of secularism.

END_OF_DOCUMENT_TOKEN_TO_BE_REPLACED

It has been more than a month that students in JNU have been protesting against the new IHA Hostel Manual. The fight had initially begun against the exorbitant fee hikes, introduction of curfew timings and dress codes, lack of reservations and deprivation points in the manual, and the undemocratic manner in which the manual was passed. At this juncture, the movement has become broader, and articulates its resistance to the National Education Policy and its defence of the idea of public university and what it stands for.

While there have been many attempts to characterize the students’ movement as anti-national and free-loading as usual by the right-wing media, it is clear that the political articulation of students has managed to transcend these limited dimensions offered by the discourse set by the public perception. Even the propagandists are this time at a loss as to how to demonise the movement. All they have been able to come up with is that the protests ‘disrupted traffic’ and that the protests are ‘political’. One is unable to understand how the latter is a jibe, when protests are obviously always political in nature, especially this one. The demonization of JNU is not simply about the social sciences, or left-oriented student politics, but also a manufacturing of consent toward the commercialization and a legitimizing of this government’s agenda to destroy public avenues of welfare. However, due to the developments that have taken place in the last few weeks, politics itself of the campus is churning, wherein what is emerging is a cultivated intersectional discourse that has resulted in the breathing of new life into the campus. END_OF_DOCUMENT_TOKEN_TO_BE_REPLACED

We the undersigned, are alumni of the Tata Institute of Social Sciences.

We are appalled at the complete lack of sensitivity shown by the JNU administration and concerned government officials to the issues raised by the students on the recent proposal of irrational 999% hike in their fee structure. We also strongly condemn the inappropriate use of brute force by the police officials towards the peaceful protest of university students when they were demanding a roll back of this policy to keep higher education accessible for all, and to oppose imposing of regressive restrictions on the clothing and movement of students in the university.

Not just insensitive, the state has also used condemnable tactics to deal with the legitimate demands of the protesting students. Instead of using questionable means to stop students from peacefully protesting and approaching the policymakers, the government should have facilitated a dialogue with the students and paid heed to their demands. END_OF_DOCUMENT_TOKEN_TO_BE_REPLACED 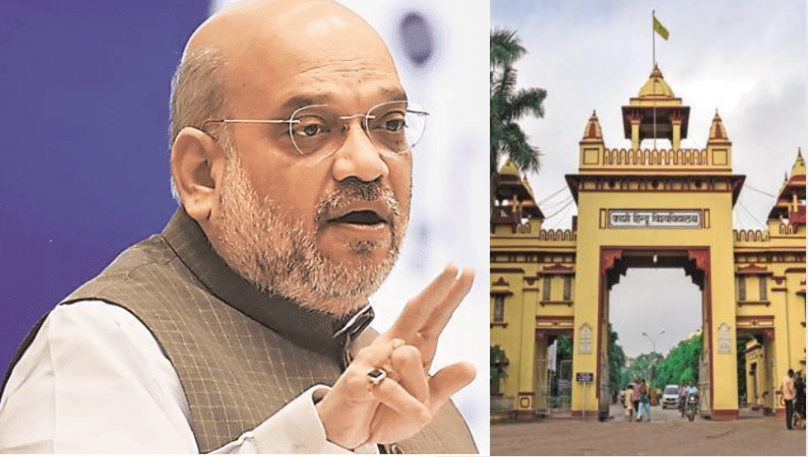 A thought is a tremendous form of excitement. [Alfred N. Whitehead]

We are concerned with the imagination, and the vaguely functionalist remarks we noticed before are not the sketch of an explanation, but an aid to the imagination, to make a different practice a more familiar idea to us, and hence to make us more conscious of the practice we have.  Seen in this light, … [t]he imagined alternatives are not alternatives to us; they are alternatives for us, markers of how far we might go and still remain, within our world – a world leaving which would not mean that we saw something different, but just that we ceased to see. [Bernard Williams]

This is an extended essay working off two official documents, and public ones at that: one, the voluminous draft of the National Education Policy 2019 (henceforth Draft NEP) authored by the K. Kasturirangan-led Committee appointed by the Ministry of Human Resource Development, (MHRD) Government of India and, second, the brief report on ‘Promoting and Improving the Quality of Research in Indian Universities/Colleges’ headed by P. Balaram under the auspices of the University Grants Commission (UGC) [accordingly, UGC-Balaram report].  My interest is as much with the former as with the latter; and, although they can be commented upon independent of each other, it is the combined resonance of these two policy suggestions that I am interested to examine (especially as they bear on the higher education [HE] space in India).