The recent incident of violence that led to the death of a police officer, DSP Ayub Pandith, was condemned by all kinds of people in Kashmir, as well as elsewhere. It prompted introspection, sadness and regret – like any tragedy of this nature should.

Yesterday two unarmed civilians, Tahira Begum, a forty three year old woman and a young man called Shahdab Ahmed Chopan of Brenty Batapora Village in Anantnag district in South Kashmir were killed along with two Kashmiri combatants (Bashir Ahmed Lashkari and another person who may or may not be called Abu Maz) in the course of a joint operation by the 19th Rasthriya Rifles of the Indian Army, CRPF and the Special Operations Group of Jammu & Kashmir police.

It has been reported that the operation was undertaken to avenge the death of Feroze Ahmed Dar, SHO of Police Station Achabal and five other men of the Jammu & Kashmir Police, by a group of insurgents led by Bashir Ahmed Lashkari in Thajiwara on the 16th of June. When SHO Feroz Dar died, we got to know a lot about him, including the poems he wrote as Facebook posts. This too was a tragedy, every unnatural death undoubtedly is.

Tahira Begum and Shadab however, were the ‘collateral damage’ of yesterday’s operation. It is unlikely that a New Delhi news channel will enquire into the possibility of Tahira Begum ever having written any poems, or whether or not Shahdab Chopan was posting selfies with his mates in Brenty village on Facebook.

The dominant noise we have heard from the state and its mouthpieces in response to this incident has been that of jubilation, and the dignified satisfaction of speaking about a job well done. While chief minister Mahbooba Mufti of the PDP said that she ’regretted the loss of civilian life’, as she always does, her Deputy Chief Minister, Dr. Nirmal Singh of the BJP was more forthright. He tweeted :

“Our bravehearts armed forces have avenged the death of Feroze Dar. Lashkar Commander Bashir killed in #Anantnag with one other terrorist.” 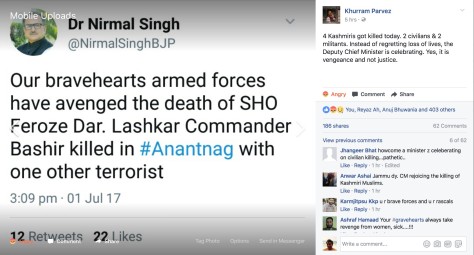 Some media outlets have tried to account for the deaths of Tahira Begum and Shadab by referring to the fact that seventeen people (men, women and children) had been holed up in the house (or houses) in which the two subsequently slain militants had taken refuge. Several media outlets used the phrase ‘human shield’ to indicate that Tahira Begum and Shahdab Chopan were somehow killed because the two insurgents used them as ‘human shields’.

People of the village however have a different narrative, and as of now, no major Television Channel or newspaper has spoken to them about what happened.  But Kashmiri news portals have, and they could have been accessed, like I did, by the commentators in Delhi and Mumbai’s  TV studios. Perhaps we would have heard a different story then.

The people of Brenty village point out that all seventeen people who were stuck in the house with the two militants came out of this encounter safe. This is something that the TV reports also indicate, referring to them as ‘hostages’ who were ‘rescued’ by Indian armed forces personnel. Clearly they were  not placed in harm’s way by the two militants. But Tahira Begum and Shahdab were not amongst the people in the besieged house.They could not have been ‘rescued’. They were shot at in the streets of the village, along with three other boys, Aaqib Teli, Yasir Ahmad and Tariq Ahmad, who were also injured and are still being treated for their wounds. Paramilitaries detained the ambulance that took the injured to hospital in Bijebehara. The driver and attendants were beaten, as is often the case.

Neither Tahira Begum, nor Shahdab was, or was made to be, a ‘human shield’, but both of them did succumb to the exercise of a few ‘human swords’ who wore the uniform of the Indian state’s armed forces yesterday in Brenty-Batapora village.

Residents of the village who had accompanied the injured young men told a correspondent of Kashmir Life that when the operation started, there had been huge arguments between the soldiers and a group of youth.

Let me quote directly from the Kashmir Life report – “Then suddenly some stone landed on the spot and soldiers opened fire,” one of the attendants said. “Soldiers opened fire and killed the lady (Tahira) from point blank” Later, they said that the “angry youth rushed towards the apple orchards surrounding the houses in cordon, wherefrom they were shouting slogans.”

The execution, or killing, of Tahira Begum and Shahdab Chopan, or the presence of their two bodies in the path of a hail of bullets – call it what you will – did not happen because the bodies in question were being made to act as ’human shields’ by anyone. The incident happened outside the house/houses that were being cordoned, at a distance. Why then pretend that their death was inevitable because they were ‘human shields’. The soldier who pulled the trigger on Tahira Begum could have chosen not to do so. He fired, according to the reports of the villagers, from ‘point blank’ range. Was she armed ? Did she endanger him? Nothing indicates that either of this was the case.

Clearly, it is acceptable for television channels to mourn and rage against the violent death of the Kashmiri who wears a  police uniform and at the same time, either celebrate or ignore or be indifferent and blasé about the death of unarmed Kashmiris who don’t wear uniforms. At best they must be reported as ‘human shields’, even if they are not. The nation does not want to know too much about them.

I personally think that the time has come for at least some of us to stop accepting the automatic flying of the tricolour in ‘civil society’ protests in ‘mainland’ India by those who claim that their dissent must be sanctified by an exhibitionistic flag -waving nationalism. This flag cannot be symbolic marker of freedom for us as long as it remains a sign that brings death, pain and mayhem in its wake for others. We usually turn a blind eye to the patriots in our gatherings, at least I do. I’m suggesting we pay them a modicum of critical attention. At least, at first, in our minds. I am not suggesting that we prevent people from bringing national flags to protests. I am certainly not suggesting that flags be burnt, or desecrated. After all, it is sacred to many. But it’s unquestioned sacredness also ensures that protestations of solidarity under it’s sign remain compromised as long as the flag is also a marker of oppression. I am simply asking for some reflection on this fact.

Calls for ‘citizens’ protests’ are nowadays often prefaced by requests that participants not bring political banners, flags and signs of organizational affiliation to the gathering, so that the protest can take place ‘uncontaminated’ by the ‘stain’ of politics. Is it not time for us to realize that the tricolor is the most powerful ‘political  banner’ there is, and that the ‘politics’ that is conducted in its name is ‘stained’ by the blood of many Tahira Begums. Can we at least start a conversation about this painful reality. And can it happen, quietly if necessary, without being blackmailed into silence because discussing this would end up ‘alienating’ people. If we agree that ‘protests’ need to be undertaken, not just for their ‘optics’, and not only always for ‘strategic’ reasons, then I feel we need to undertake a more rigorous introspection into the possibilities and constraints that ethical demands place upon the vocabulary and syntax of public dissent. This is why I am asking a question about the unstated assumption of the ‘innocence’ of the tricolor flag.

Until such time as the same tricolour remains the symbolic bearer of a double standard about the value and worth of life in occupied territories, I refuse to be coerced into offering it even a passive or proforma respect. Can you? That respect, if it must be asked for, must also be earned, by the nature of the conduct that is undertaken under that flag. 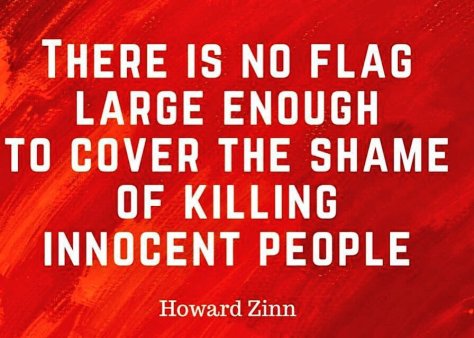 As of now, I am now unable to look fellow protestors who carry a tricolour in the eye – because knowingly or unknowingly they seem to me to have become walking representatives of the current double standards of Indian nationalism. Can you look such a person in the eye? Or do you, like me, avert your gaze and look in the direction opposite to the one in which they wave the flag ?

But it won’t do to simply look away. Not any more. I would like those of us who carry Indian passports, or identify as Indian citizens, to think about how to deal with the fact that there is no escaping the fact that the bullets that take the lives of many non-combatant civilians in Kashmir, do so, with precision and accuracy, in our name, under the fluttering tricolour’s watch.

And that is all I am doing.