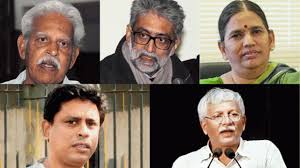 The recent arrest of activists and intellectuals, and raids on various others connected with rights activism across five states in India is a grim reminder of the shrunken space for protest, criticism and dissent in our democracy today. This tendency to muzzle opposing voices has been on brazen display over the past four years though earlier governments had also tried to brand civil rights activists as ‘Maoists’ and as anti-development and anti-progress in a sense. The case against Dr. Binayak Sen, an office bearer of People’s Union for Civil Liberties comes to mind who was also alleged to be a Maoist.

The entire episode raises many questions on the motives of the government for this kind of concerted clampdown on human rights defenders. As of now, the charges against the activists seem far-fetched and entirely fabricated. Most of the activists who are now in jail or under house arrest are long-time members of the civil liberties movement in our country in the post-emergency period. Civil and democratic rights organizations and their activists have faced the charge of being fronts of this and that organization earlier too, and some have been attacked and killed also as in Andhra Pradesh. But what is important to understand is the location of the civil and democratic rights movement vis a vis democracy in India. The civil and democratic rights movement emerged in the space of civil society at a particular moment in Indian democracy, the time of grave repression of liberties and rights of people during Emergency. Since then the movement has tirelessly worked to guard the rights of people through various means like fact findings, publishing reports, public meetings, court cases, public protests, pamphlet distribution and such other activities, to publicise and fight against the violations of rights by the state and other powerful formations. All these activities of the civil and democratic rights movement are public in nature, the reports of fact findings are released to the press, the events are publicised. Their meetings happen in public spaces as the organizations want more and more people to know about civil liberties and democratic rights, and work with them.

Civil liberties organizations are said to play an important role in deepening democracy and widening the ambit of rights given in our constitution. The work of the civil liberties movement over the years is a testimony to the role it has played in giving voice to the most disadvantaged sections of our society. It has consistently taken up cases of violations of workers’ rights, the issue of violence in custody, exposed fake encounters, has stood against death penalty, has canvassed against extraordinary laws for they give extraordinary powers to the executive, impinging on rights and liberties of citizens. Even in conflict zones such as Dantewada in Chhattisgarh, the civil liberties movement continued to bring to light the violations of rights of people living in the area. In so doing, the movement made democracy in India take cognizance of the issues raised by the people of the region and also showed it a mirror for the kind of violations that a democratic state can also indulge in. It stood providing an important window for the state to engage with the disgruntled, excluded people of this region than repressing them.

As Ram Manohar Lohia had written in the backdrop of formation of Indian Civil liberties Union in 1936, the concept of civil liberties was an outcome of the struggle that the citizen has waged against the state and history provides enough examples to show that people who have been critical of the state have faced its wrath. Civil liberties provided the citizens with rights to basic minimum safety and provided limits on state’s authority. For Lohia, the concept of civil liberties was essentially a liberal concept acting as a buffer between state tyranny and mass revolts. It is this role that the civil and democratic rights movement seems to be fulfilling even in independent India for which it is facing the wrath of the state.

The kind of work that the civil rights groups in India and even in other parts of world do, involve holding the state accountable in an ever widening construction of rights. An example of the successful attempt by the democratic rights groups to widen the understanding of rights can be seen in the famous Asiad Case Judgement in 1982 by the Supreme Court on a report filed by People’s Union for Democratic Rights on the basis of its fact-finding about the non-payment of minimum wages to workers on Asiad Games construction sites. The judgement defined the non-payment of minimum wages as forced labour which stands prohibited under article 23 of the Indian Constitution.  This case also led to the widening of the ambit of locus standi to third parties.

Consequently, on many occasions civil liberties organizations seem to be manifestly standing in opposition to governments of the day and even the state machinery. Most of the time they also stands against the dominant understanding in the larger society. It is therefore easy to target them as anti-national, supporting a banned party and the like. Of course, civil liberties movement over the years has stood against the politics of banning precisely because it denies space to an alternative voice. The work of the civil rights organizations brings them in contact with many movements like the women’s movement, the trade union movement, the dalit movement and possibly also the Maoist movement. But despite allegations of acting as fronts of these movements, the civil liberties movement has taken an objective view of the situation and has carved out an autonomous space for itself, as affirmed by press statements and reports.

For instance, People’s Union for Democratic Rights (PUDR) has condemned wanton acts of violence by the Maoists. It strongly condemned the killing of Inspector Francis Induvar in Jharkhand by the Maoists in October 2009. Condemning the Maoist attack on Tata Bilaspur passenger train in November 2009, the statement by PUDR writes that it has time and again pointed out that political formations using armed resistance cannot evade the responsibility for causing civilian casualties. Civil casualties cannot be regarded as collateral damage in contexts such the attack on a passenger train. Ironically, the person writing these statements condemning these acts of the Maoists and asking them to abide by international norms like Geneva Convention was none other than Guatam Navlakha, the then secretary of PUDR. Gautam is today under house arrest and accused of being an active member of Maoist party! Gautam Navlakha has been a founder member of PUDR and thereby has been a witness to the founding moment of the civil democratic rights movement in the country post-independence. He has relentlessly worked for the cause of civil and democratic rights across India going on fact findings, preparing reports, taking organizational responsibilities.

Anyone who has seen these organizations work know the kind of human and financial constraints they work with. They are non-funded and have meagre financial resources drawn entirely from contributions of the members and the sale of their reports. For any public event which needs more than 15000 rupees, the civil liberties organizations face a fund crunch. These are small organizations comprising of students, teachers, journalists and lawyers, all of whom, while being engaged in their respective livelihood battles also take time out to fight for the cause of civil rights. Some of them have dedicated their lives exclusively to the cause of upholding the rights of people. Their efforts can only be lauded as heroic for what keeps them going is a common concern for rights and liberties, not of themselves but of the marginalised and the violated. To target these kinds of people as “conspirators”, “waging war against the state”, deprives our democracy of the important aspect of citizens coming together and acting as defenders of rights of people.

The meaning of democracy has been turned into a crass majoritarian one in recent times where every kind of dissent has been turned into “anti-nationalism”. The core of our constitutional democracy is that alternative opinions, ideas, ideologies, even one differing voice is heard. Imagine a democracy without these differing voices, without these activists and without the issues brought to the public sphere by the civil democratic rights movement over the last 40 years of its working in our country. Much that is valuable to democracy, to the ideas of justice and equality would have been lost if we did not have these activists and movement that they come from.

If a democratic state feels insecure because of civil democratic rights activities and starts framing activists in false cases invoking draconian laws like Unlawful Activities Prevention Act (the civil liberties movement has been campaigning against this law for long now), clearly there is the intention to silence these voices. Democracy cannot be reduced only to its electoral form and hollowed of its essential and substantive content. What happens after elections are over is what a democracy should be more concerned with. That is what gives substance to the idea of democracy and that is where the role of civil society becomes important. These activists were trying to do just that by taking up issues of the most marginalised sections of our society for years together and working as a watchdog on the state. To imprison them for doing this is to imprison the very core of the democratic ideal.