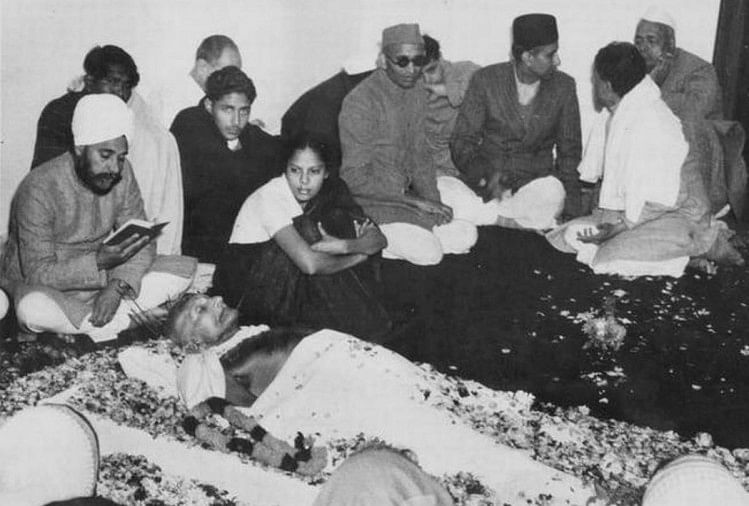 The debate around ‘Father of Nation” came back with a vengeance.

Thanks to POTUS Donald Trump who attended the Howdy Modi rally in Houston and the ‘love fest over the weekend’ ( https://jacobinmag.com/2019/09/modi-houston-rally-hindu-nationalism) where he heaped praise on Modi :

“I remember India before was very torn. There was a lot of dissension; fighting and he brought it all together. Like a father would. Maybe he is the father of India,” (https://www.indiatoday.in/india/story/donald-trump-calling-pm-modi-father-of-india-insult-to-mahatma-gandhi-jairam-ramesh-1603166-2019-09-25)

Any neutral observer of US politics would have told that praising his guests in superlatives has been a regular practice with POTUS which is neither taken seriously by the guests nor the people of America. Only a few days before this Houston rally he had similarly praised Australia’s Prime Minister Scott Morrison as a “Man of Titanium”, “a man of real, real strength, and a great guy”.(https://www.theguardian.com/australia-news/2019/sep/21/donald-trump-suggests-china-a-threat-to-the-world-while-praising-scott-morrison-as-a-man-of-titanium) “. And he has had no qualms in even celebrating “a variety of right-wing personalities, meme-makers and conspiracy theorists at his so-called “Social Media Summit” at White House and bringing new respectability to the right’s online fringe. (https://www.thedailybeast.com/trump-praises-right-wing-conspiracy-theorists-at-white-house-the-crap-you-think-of-is-unbelievable)

Perhaps it would have appeared rather befitting for the moment that Prime Minister Modi should have taken initiative in ‘thanking President of America’ for his words of praise and rather told him very politely that we Indians consider Mahatma Gandhi – who led the anti-colonial struggle against the Britishers – as ‘Father of the Nation’.

Nothing of that sort happened.

Bhakts rather went euphoric that Trump had called Modi ‘Father of India’.

In fact, it appeared that a section of leaders and supporters of BJP were feverishly waiting for such an endorsement from some world leader for PM Modi. Remember it is on record how earlier as well

“[a] lot of people closely related to the BJP have often, called Modi the father of this country. In a debate with Kanhaiya Kumar, Sambit Patra was heard saying “Baap hain Modi, humaare nahi, poore desh ke baap hai Modiji (he is the father of the whole country.)”Just before the elections, AIADMK Minister, the then Tamil Nadu minister for Milk and Dairy Development K T Rajendra Balaji had said very proudly, “Modi is our daddy, he is our daddy, India’s daddy.”( https://www.nationalheraldindia.com/india/tweeple-not-amused-by-modi-being-called-father-of-india)

Union minister Jitendra Singh perhaps gave vent to the overwhelming feelings in the saffron camp when he said that those who “do not feel proud” of US President Donald Trump’s comment that Prime Minister Narendra Modi is the “father of India”, do not consider themselves Indians. (https://thewire.in/politics/those-not-proud-of-modi-being-called-father-of-india-arent-indians-union-minister) It did not matter to him that by calling Modi ‘Father of India’ Donald Trump has in fact insulted Mahatma Gandhi, in his 150 th birth anniversary year.

Not only that Mr Jitendra Singh’s espousal of Modi’s praise by Trump was a great insult to Netaji Subhash Chandra Bose, who in his address on Singapore Radio on July 6, 1944 had addressed Mahatma Gandhi as Father of the Nation for the first time. It was the period when both Kasturba and Gandhi both had been interned at Aga Khan Palace, Pune in the wake of Quit India Movement. Kasturba passed away while serving her prison term on 22 February, 1944. Netaji’s message read as follows:

“………..Nobody would be more happy than ourselves if by any chance our countrymen at home should succeed in liberating themselves through their own efforts or by any chance, the British Government accepts your `Quit India’ resolution and gives effect to it. We are, however proceeding on the assumption that neither of the above is possible and that a struggle is inevitable.

Father of our Nation in this holy war for India’s liberation, we ask for your blessings and good wishes”. (http://www.gandhi-manibhavan.org/main/q1.htm)

Looking at the fact that the saffron brigade –  kept itself aloof from the independence struggle and Hindu Mahasabha, led by Savarkar, then campaigned among Hindu youths to join British military when they were facing stiff resistance from broad masses of people because of the 1942 Quit India movement, it is rather too much to expect that they would be careful about such niceties ( like respecting freedom fighters)

Secondly, it was clear that for the followers of the Hindutva brigade it did not matter at all that Trump’s praise had come when he finds himself embroiled in a serious controversy. A formal impeachment inquiry against him has been initiated in the House of Representatives ‘charging him with betraying his oath of office and the nation’s security by seeking to enlist a foreign power to tarnish a rival for his own political gain.’ (https://www.nytimes.com/2019/09/24/us/politics/democrats-impeachment-trump.html) making him the fourth President in America’s history to be subjected to such a scrutiny.

Remember this enquiry could be seen just as a tip of iceberg of Trump’s acts of commission and omission.

What is becoming obvious that Trump’s own record as President of USA and earlier is less than noble. A mere perusal of his career by a Opinion Columnist at New York Times (https://www.nytimes.com/2019/09/22/opinion/trump-ukraine-whistle-blower.html) ‘in forty sentences’ is worth recalling:

He has pressured a foreign leader to interfere in the 2020 American presidential election.He urged a foreign country to intervene in the 2016 presidential election. He divulged classified information to foreign officials.He publicly undermined American intelligence agents while standing next to a hostile foreign autocrat. ..He encourages foreign leaders to enrich him and his family by staying at his hotels…He described white supremacists as “some very fine people.”He told four women of color, all citizens and members of Congress, to “go back and help fix the totally broken and crime-infested places from which they came.”..He launched his political career by falsely claiming that the first black president was not really American…He has been accused of sexual assault or misconduct by multiple women…He has encouraged his supporters to commit violence against his political opponents.

Question arises if someone who is known to tell ‘new lies virtually every week — about the economy, voter fraud, even the weather’ (https://www.nytimes.com/interactive/2017/06/23/opinion/trumps-lies.html?module=inline), who has described women, variously, as “a dog,” “a pig” and “horseface,” as well as “bleeding badly from a facelift” and having “blood coming out of her wherever.”(https://www.nytimes.com/2019/09/22/opinion/trump-ukraine-whistle-blower.html) or who has ‘obstructed justice by trying to influence an investigation into his presidential campaign ( -do-), praises someone else, then should it be seen as a compliment or an insult and why such elation among followers of Hindu Rashtra.

One knows that such moralistic questions do not trouble – a large section of people – these days anymore, a clear sign of the fact that we have really ushered into a ‘New India’. This is an India where mob rule has slowly overwhelmed the rule of law, where cartoonists are arrested for mocking leaders under the charge of sedition. A new India with its new icons where ‘vigilante killers are being compared with India’s freedom fighters’ (https://thewire.in/history/hindutva-vigilante-killers-freedom-fighters).

This ‘dethroning’ of Mahatma Gandhi from the pedestal of ‘Father of Nation’ and ‘enthronment of Narendra Modi’ in his place reminds one of an episode two years back when in a surprise development, Prime Minister Narendra Modi had literally “[e]jected Father of the Nation Mahatma Gandhi in the 2017 wall calendar and table diary published by the Khadi Village Industries Commission (KVIC)…Most employees and officials were taken aback to see the cover photo of the calendar and diary showing Modi weaving khadi on a large charkha’, in the same classic pose as Gandhi ji.”(https://www.indiatoday.in/india/story/modi-khadi-gram-udyog-make-in-india-mahatma-gandhi-rahul-gandhi-954592-2017-01-12).

A leader of the BJP – who happened to be minister in Haryana goverment – Anil Vij, made it very clear that this was not an inadvertent error and “[a]fter khadi stationary, Mahatma Gandhi would be removed from notes as well.”(https://www.indiatoday.in/india/story/khadi-calendar-narendra-modi-mahatma-gandhi-rupee-anil-vij-954953-2017-01-14) He added that “[P]M Modi is a bigger brand name than Mahatma Gandhi for khadi…Khadi is not patented in the name of Mahatma Gandhi. “( – do-)

Or one can as well look at Gandhi’s reduction to a pair of spectacles when Modi government took over in 2014 and when ‘ Swach Bharat Abhiyan’ was launched by Modi with a bang.

Whatever might be their formal claims, these isolated looking examples underline one thing, the saffrons cannot hide their growing unease with Mahatma Gandhi –  whose imagination of an independent India stands at complete variance with their worldview. And are trying to find umpteen ways to unseat him or substitute him with someone more close to their ideals. It is no mere coincidence that the campaign to glorify Gandhi’s killer Godse and demonise Gandhi caught speed only with the ascent of a right-wing government at the centre (since 2014). (https://www.newsclick.in/glorifying-godse-demonising-gandhi).

It was a sign of their desperation that Donald Trump, the ‘serial liar’ (http://www.thestandard.com.hk/breaking-news.php?id=135076&sid=6) who himself represents “a threat to America’s future” (-do-) provided them a fig leaf and they had no qualms in going gaga over it but had no idea that this move would similarly flounder adding fresh coat of egg on their face.