This release comes from the ASSOCIATION OF PARENTS OF DISAPPEARED PERSONS, the Bund, Amira Kadal, Srinagar – 190001, Jammu and Kashmir

Press Statement, 25th January 2012: On 17th October 2011, Association of Parents of Disappeared Persons (APDP) submitted an application for information under Right to Information Act 2009 to the office of the Public Information Officer of State Department of Home. The application was regarding unmarked graves and mass graves in all the districts of Jammu and Kashmir. The State Home Department vide its letter no: Home/RTI/2011/1659 dated: 24th October 2011, transferred the application to the office of Director General of Police, Jammu & Kashmir. Later Director General of Police, Mr. Kuldeep Khoda sent communiqué vide no. legal/RTI/III/98/2011-5590-91 dated 10th December 2011 to the SSP CID Headquarters, asking him to furnish a detailed report on this issue.

Today, on 25th January 2012, we have received a response from the SSP CID Headquarters vide letter no: CID/GB/RTI/2011/8756-58, in which the CID Department has informed us that the information regarding the unmarked graves and mass graves in all the districts of Jammu and Kashmir cannot be shared as the disclosure of the information, according to Jammu and Kashmir Police would be “prejudicial to the maintenance of public peace and tranquility, as the anti-national elements may use the same for incitement of commission of offence in the state”. The SSP CID Headquarters further states, “In the present security scenario it is quite imminent that consequences of such a situation would be highly prejudicial to the sovereignty, integrity and security of the state”. END_OF_DOCUMENT_TOKEN_TO_BE_REPLACED 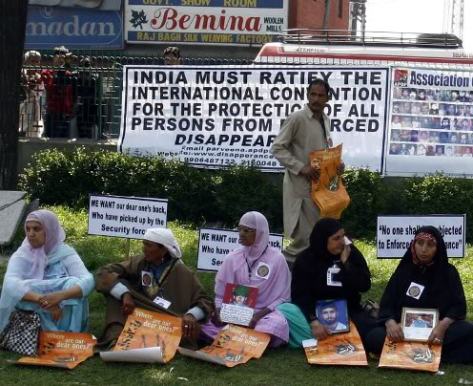 Srinagar, December 10, 2011:  On this ‘International Human Rights Day’, December 10, 2011, the APDP (Association of Parents of Disappeared Persons), Srinagar, wishes to state that there is something obscene and perverse in the manner the CNN-IBN has nominated our organization for the ‘Indian of the Year 2011’ award. Sometimes, human rights can be violated by merely mocking those who struggle for human rights. END_OF_DOCUMENT_TOKEN_TO_BE_REPLACED

Hectic parleys are on at the moment to jettison the dreaded AFSPA in the valley. By conservative estimates the army must have beaten about one in every five Kashmiris at one point or the other since this piece of horrible legislation was slapped on us. An unjust law, is no law at all, Martin Luther, the symbol of protestant reformation, verbalized the sentiment of St Augustine in the 15th century. Rings true to this day.

For more than twenty years people have been punched, thrown in the back of military trucks, knocked down by gun-butts, given kicks, pushed around as they got off a bus or simply slapped around for no apparent reason. Just for being themselves, perhaps. No you could not question the moral turpitude of a military-walla from Madras if he clubbed your aging father.  END_OF_DOCUMENT_TOKEN_TO_BE_REPLACED

APDP feels that the recent announcement by the Chief Minister Omar Abdullah on the partial revocation of Armed Forces (Special Powers) Act (AFSPA) from some areas of Jammu and Kashmir would be insignificant for improving the human rights situation and also for providing justice to those affected by the mindless violence by armed forces.
END_OF_DOCUMENT_TOKEN_TO_BE_REPLACED