Open letter from Anand Teltumbde, reproduced from The Wire.

I am aware that this may be completely drowned in the motivated cacophony of the Bharatiya Janata Party and Rashtriya Swayamsevak Sangh combine and the subservient media, but I still think it may be worth talking to you as I do not know whether I would get another opportunity.

Since August 2018, when the police raided my house in the faculty housing complex of the Goa Institute of Management, my world has turned completely topsy-turvy.

Never in my worst dreams could I imagine the things that began happening to me. Although, I was aware that the police used to visit the organisers of my lectures – mostly universities – and scare them with enquiries about me, I thought they might be mistaking me for my brother who left the family years ago. END_OF_DOCUMENT_TOKEN_TO_BE_REPLACED

As I prepare to Ieave to surrender before the NIA headquarters in Delhi I am glad that Justice Arun Mishra and Justice Indira Banerjee gave me another week of freedom when they passed the order on April 8, 2020. A week of freedom means a lot in my condition, even in the age of lockdown. Their order resolved the predicament I encountered in complying with the March 16th order of the apex court, which obliged me to surrender by April 6th before the NIA, Mumbai. The lockdown that followed prevented me from travelling. Also there was no direction from NIA (Mumbai) regarding what I should do under the circumstances. I know now that I have to surrender myself to the NIA Head quarters in Delhi.
END_OF_DOCUMENT_TOKEN_TO_BE_REPLACED 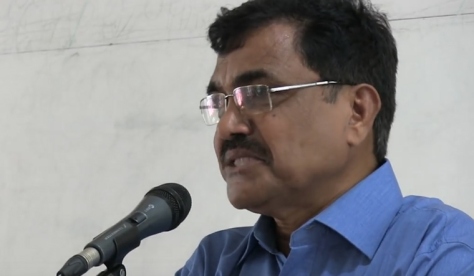 Coinciding with the upcoming Ambedkar Jayanti, Dr. Anand Teltumbde , one of India’s foremost public intellectuals and the strongest legatee of Babasaheb Ambedkar’s tradition of struggling for a truly democratic India, will be complying with the Supreme Court’s order to surrender to the jail authorities. He will be surrendering on the 14th April 2020, between 12 noon – 2 pm at the Sessions Court in Mumbai. This is both tragic and shameful for all Dalits, Adivasis, OBC, and minorities on many counts for all of India.

It marks a day

– on which this country will celebrate the 129th birth anniversary of one of its greatest minds and hearts, Dr. Babasaheb Ambedkar and on which the mighty nationalist machinery seeks to crush the spirit that kept the flame of democracy alive in our midst; END_OF_DOCUMENT_TOKEN_TO_BE_REPLACED

[This is a statement of solidarity endorsed and signed by over 200 intellectuals, artists, academicians, lawyers, journalists, and students in support of the five arrested in connection with Bhima-Koregaon case. In the 43rd year after Emergency was declared in this country, this statement was issued on June 25th 2018 condemning the arrest of such voices of democracy and demanding their immediate and unconditional release.]

We condemn the arrest of five human rights activists, professors and lawyers in connection with the Bhima-Koregaon clashes early this year. The alarming arrest of Advocate and General Secretary of Indian Association of Peoples’ Lawyers (IAPL) Surendra Gadling, Committee for the Release of Political Prisoners (CRPP) Public Relations Secretary Rona Wilson, Head of English Department Professor Shoma Sen of Nagpur University and member of Women against Sexual Violence and State Repression (WSS), cultural activist and founder of Republican Panthers Jaatiya Antachi Chalwal Sudhir Dhawale and anti-displacement activist and Prime Ministers Rural Development Fellow (PMRDF) Mahesh Raut is a clear manifestation of state terror to crush the voices of dissent in this country.

The intemperate use of sections of the IPC and Unlawful Activities (Prevention) Act (UAPA) on all five reveals legal over-reach and exposes the desperation to foist extraordinary and excessive charges on all five to ensure they remain in the clutches of the Fadnavis-Maharashtra government. All the arrested have consistently worked for the assertion of oppressed and marginalised communities against majoritarian forces, spoken out against Brahmanical patriarchy, upheld peoples’ rights to land, life and dignity, and have strived for the release of political prisoners.