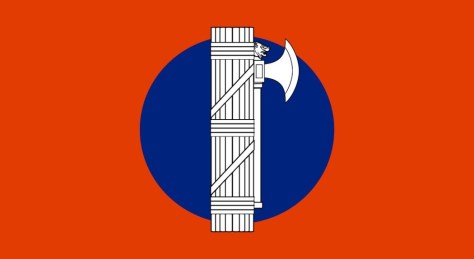 There is a rumour circulating which is best dispelled as soon as  possible in the interests of factual knowledge (which is rather shy and rarely seen these days. Sometimes you see its shadow slip past, from the corner of your eye). So, no, absolutely not, the word fascism does not come from faeces.

It might as well have, but no. Really it doesn’t. The Vedic goddess vac (she who personifies speech) is not renowned for a sense of humour.

What the word fascism does come from is the aforementioned “bundle of sticks tied to an axe” or fasces,  that the bodyguard of the Roman magistrate carried in ancient Rome, as a symbol of his authority. Then Mussolini came along and resurrected the thing as a reminder  of ancient pride (although, not much pride for the minion carrying the symbol of another’s authority) and unity (sticks tied together are harder to break than sticks on their own).

Hence fascism. Hence the extreme allergy to being called fascist among Sanghis and the BJP because, really – Italy? Italy as the source of a name for their government? How fair is that, mitron? END_OF_DOCUMENT_TOKEN_TO_BE_REPLACED