On Josh Malihabadi’s 30th death anniversary, doing the rounds is this recently uploaded interview of the Urdu poet, amongst a rich archive uploaded on YouTube by Radio Pakistan.

Josh migrated to Pakistan only in 1958. About the loss of Lucknow, he says it was like losing the world. He says in this interview about a visit to Lucknow, where he asked a taxi driver, how is it going with all these Sikhs and Punjabis who have come to Lucknow. The taxi driver replies, we have taught them (Lakhnavi) etiquette! 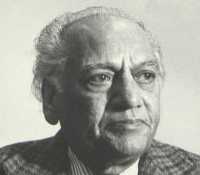 (An edited, shorter version of this essay had
appeared some years ago in Man’s World magazine.)

Call me the man who met V.S. Naipaul.

It all started innocently enough. A journalist telegraphed from Bombay that he was reaching Lucknow on such and such a date with V.S. Naipaul.

My excitement knew no bounds and I fixed it with a mutual friend, Azad, to go to the airport to pick them up. As luck would have it we got stuck in the traffic jam and reached the airport late. With hindsight I shudder to think what a close shave I had, what with Naipaul’s antipathy to people being late for an appointment.

We shook hands and since there was hardly any luggage we got into the car and headed back to the city. In spite of the intense summer heat Naipaul was wearing a summer suit and a felt hat. He was wearing a checked shirt with the collar buttoned but without a tie, white socks and loafer shoes, the kind in which the socks show.

His skin was dark like walnut, and because the felt hat hid his thick head of hair the initial impression which had become familiar to us from Hollywood gangster movies. The expression was fixed in a perpetual grimace with the lips pursed as if he was just enduring being stuck in a place like this. There was not a hint of a smile.

I told Naipaul that A House for Mr Biswas was one of my favourite books and I am sure that he must be pleased with it too. He modestly said, “It just got written and yes I am very fond of Biswas too.” Modestly because in one of his interviews Naipaul said that he knew that it was going to be a big one. I referred to the ‘skin tights’ episode and Naipaul gave an amused chuckle. In my younger days, when I had read the novel, I had felt that it was very cruel to write this episode however amusing it might have been. But I did not say so to him. END_OF_DOCUMENT_TOKEN_TO_BE_REPLACED

If you’ve recovered from your Post-Slumdog Stress Disorder, may I dare to write a short post about Smile Pinki, the short documentary that also won an Oscar and that is also set in India? END_OF_DOCUMENT_TOKEN_TO_BE_REPLACED

Three month old Babu who is affectionately called Yuvraj also is not in a position to read the changes in his mother’s face nor can comprehend why everyone in the family has suddenly started looking tense these days. For the kid the world remains the same, but for his family members it has rather changed a lot.