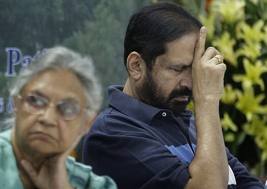 I had imagined that there would be time after the Games. Kalmadi and his cronies would have to hang, of course, but it could have been done in a measured fashion. Now, it appears that there is no time to lose. The Shameless One has actually said something about bidding for the Olympics! And with the promise of enough money in the trough, we can expect the pigs to grunt their approval too – just like they did the last time. But in the name of all the people who have been uprooted, and had their livelihoods destroyed; the students who have been thrown out of their hostels; the long-suffering citizenry of Delhi that is currently undergoing the final stage of the insult and humiliation that has been heaped on them over the past year in the name of the Games, I say, enough! Hang the bastards, now!

But I should clarify quickly. I am not so naïve as to be outraged by the corruption. It is the stupidity I am particularly offended by. After all, corruption is only one half of the story. And, frankly, the corruption is hardly surprising. Corruption, to my lay understanding, is the whole point of these large “public” enterprises – it enables the crooks-in-power to get their hands on the money that has been gouged from the poor. That is exactly what everyone expects – the poor victims, the crooked beneficiaries. But surely the stupidity is gratuitous?