This guest post by RAJINDAR SACHAR comes to us via the PEOPLE’S UNION FOR CIVIL LIBERTIES. 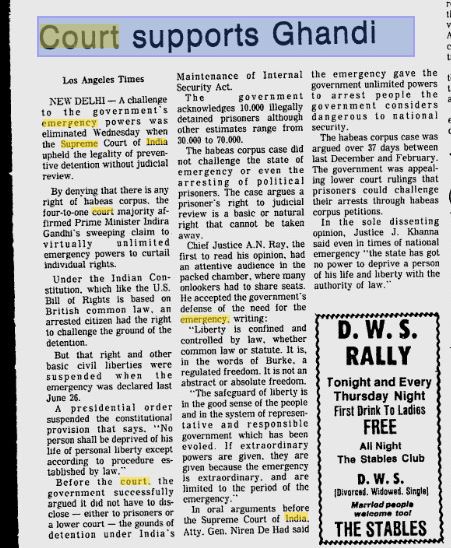 Nations which do not remember their immediate past are in danger of repeating their tragic mistakes. This thought came to me on June 26th, 2013 (the Emergency day of 1975) when on random questioning of age group of 35 in the country (who are said to make up about half the population) I found that most of them did not know of any particular significance of the day – and more tragic, fairly large number of people above the age of 35 fared no better.

The reason was obvious. Most of the population get their information from newspapers, which with commercial angle in view never fail to remind us of Valentine’s day. But on 26th June, the newspapers did not even have a small news item in their paper – leave apart on the front page. Even many opposition parties which were the victims of Emergency chose to keep low key. Even though PUCL and other civil liberties organizations held protest meetings as usual, but news TV and newspapers avoided any mention, overwhelmed as they are with the government’s neo-liberal policies. Or is it a sense of fear because the perpetrator of Emergency was the ruling party – so much for freedom of press.

It was the day when India lost its democracy. The US President sarcastically boasted that USA was now the largest democracy. It is a different matter that thankfully, because of the sacrifices made by the Indian people under the inspiring leadership of Jai Prakash Narain (J.P.), the boast of USA President was to end, but only after 18 months.

The wounds have remained – the danger of it being repeated in the same manner may have been eliminated but a clearly concealed kind of version by the government in using the various security legislations against human rights activist and trade unionists continues to haunt us.

Question is often asked how come emergency could happen notwithstanding our constitution giving us all the fundamental rights and democracy being a basic feature of constitution as so refreshingly held in Kesavananda Bharati case as far back in 1973 by our Supreme Court.

It is not that there was no resistance to the Emergency. Thousands went to jail, including former central ministers, chief ministers, governors, lawyers, legislators and a few brave journalists. Many human rights activists went underground but there is a limit to which unarmed people can fight an intolerant and a near fascist state which India had become those days. Complete fear had enveloped the country. And all this because rule of law had completely been eliminated by the Supreme Court Ruling in ADM Jabalpur case (April 1976), which overruled the view of nine High Courts that the legality of detaining order passed by the governments could still be examined – in fact in some cases the High Courts had ordered release of detenues. Had this view been upheld, emergency would have collapsed. But to our shame the Supreme Court by a majority of 4 judges against one honourable exception (Khanna J.) laid down a proposition of law, which for ever will remain a hall mark of shame:

“In view of the Presidential Order dated June 27, 1975 no person has any locus standi to move any writ petition under Article 226 before a High Court for habeas corpus or any other writ or order or direction to challenge the legality of an order of detention on the round that the order is not under or in compliance with the Act or is illegal or is vitiated by mala fides factual or legal or is based on extraneous considerations.” 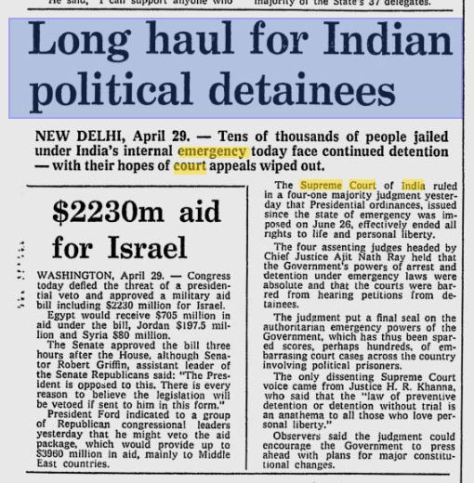 Is it not obvious that Emergency could not be fought in a legal and democratic manner because the Supreme Court accepted Attorney General’s argument that if a policeman under orders of his superior was to shoot a person or even arrest a Supreme Court judge, it would be legal and no relief available. Naturally, in this situation, no peaceful opposition to Emergency could continue. I am shocked how the majority decision could rely on Liversidge Vs. Anderson given during wartime in 1942 by House of Lords, but with a (memorable dissent by Lord Atkin) when English Courts subsequently felt so ashamed of that decision that a conscious effort was made to throw that decision in to a dung heap.

Lord Akin caustically remarked about judges who “show themselves more executive minded than the executive’ and commented that such, arguments which might have been addressed acceptably to the Court of King’s Bench in the time of Charies-I’. In fact Justice Stable a Judge of High Court London was so upset to say that the status of Judiciary had been reduced “to mice squeaking under a chair in the Home office”.

In 1963 Lord Radcliff (HL) referred dismissively to the very peculiar case in Liversidge Vs. Anderson and said “it should be confined apparently to a war time context and that it is already clear that the decision was regarded as an aberration”.

All this trenchant criticism of Liversidge was available in various law quarterly reviews since the beginning. Law Quarterly Review (1970) clearly spelled out how embarrassing the decision in Liversidge was becoming for English judiciary. That is why Lord Diplock (HL) in 1979 was constrained to rule, “For my part” I think the time has come to acknowledge openly that the majority view in Liversidge Vs. Anderson were expediently and, at that time, wrong and the dissenting judgment right”. And Lord Scarman laid final demise by saying that “the ghost of that decision need no longer haunt the law”.

Some commentators have ironically described majority in Liversidge case as the court’s contribution to the war effort of England – similarly many in this country are inclined to describe majority in Jabalpur case as Supreme Courts contribution to the continuance of 1975 Emergency. Had Supreme Court taken the same view as 9 High Courts, the emergency would have collapsed immediately, because no court could possibly have upheld the detention of stalwarts and patriots like Jayaprakash Narayan Ji, Morarji Desai, Raj Narain, George Fernandes, Madhu Limaya and thousands of others on the ground that they were a danger to the security of the country. The inevitable result would have been the immediate release of these leaders leading to overwhelming opposition movement which would have swept away Indira Gandhi government by mid 1976. Alas, how sometime fate of nations can be influenced by the pusillanimity of a few individuals – in this case embarrassingly by the highest judiciary which it can never live down.

11 thoughts on “The shameful role of the Indian Supreme Court in the Emergency of 1975: Rajinder Sachar”