A petition from an organization called Change India invaded my Facebook wall today right before – rather ironically, it turns out— my morning auto ride. The petition is filed under a category on the site called “petitions for economic justice.” When you open it, the image pasted below opens. A sharp fanged, dark skinned “auto-rakshasa” demands one-and-a-half fare. The commuter is “harassed.” The petition that accompanies this image urges the ACP of police to create “an efficient system” so that complaints made to report auto-drivers who overcharge or refuse to ply can be tracked. How, it asks, can “concerned Bangalorean citizens” expect “justice” if their complaints are not tracked?  We all must, it urges, “join the fight.” 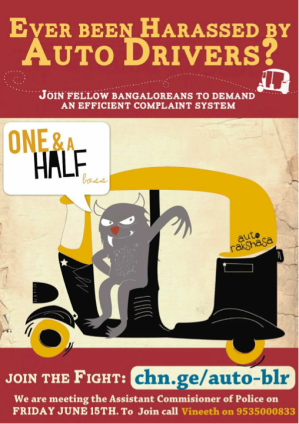 Let me first say quite clearly that I do not mean to undermine the intentions and frustrations of those who launched this campaign and, yes, when the meter goes on without asking, it eases a morning commute significantly. The question is: if this does not happen at times (and indeed it doesn’t) then why is this so and what does one do about it? There is a lot to be said about the economics of the issue itself and I welcome others reading who know more to write about it more extensively. But this piece is not about that. It is about the campaign itself and how we articulate political questions in our cities. It is fundamentally about the easy, unremarked way in which a working urban resident and citizen – who is also, after all, a “fellow Bangalorean” and concerned with “economic justice”– can be termed and portrayed a “rakshasa” as if it were a banal utterance.

END_OF_DOCUMENT_TOKEN_TO_BE_REPLACED

In the 1990s, when I first understood economics, austerity was a word that scared me. It represented a paradigm that I associated with the story of Zambia in the late 1980s. Zambia had one of the more functional public health systems in Africa in the late 70s and early 80s. It then became IMF’s test case for user fees in health care and the rest of the story is familiar one of user fees, loss of access and a systemic worsening of care in an already incredibly poor country. “Austerity” was [and is] in economics of a certain tune, not about economy class travel and eliminating excess photocopying. It was about tightening state expenditure, usually to pay off large scale debts. It was part of Structural Adjustment and the attack on “big” African government, part of the shock transitions of Eastern Europe.

In one of its shades, then, austerity is the slow dismantling of the welfare state. It is not the stance — as the UPA would have you believe — that one takes in some notion of deference to the reality of poverty, it is the cause of some of that poverty in the first place. Every time one government or any other calls for “austerity drives” of any kind, the shadow of this austerity still haunts them. The austerity that causes poverty is also rooted within these calls, though more quietly.