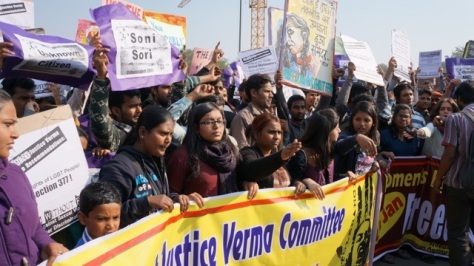 Yesterday, the Union Cabinet decided to rush drafting an ordinance in response to the massive protests against rape and sexual violence that have been occurring ever since the 16th of December, 2012. According to preliminary reports, the ordnance, which will be signed into law by the President of India before Parliament even meets, flies in the face of the detailed and exhaustive list of recommendations made by the Justice Verma Committee (JVC) which had been hailed by the protesting young people and a large number of women’s organisations. In other words, the government feels no need to discuss the JVC in parliament. It feels no need to even give time and an opportunity for its recommendations to sink in, for there to be more thinking, more ideas, more awareness of the issues and questions at stake. No wonder, the government had so hastily pulled down the JVC report from its own websites after it had been released.

Here are a few salient points that have been reported about the contents of this ordinance.

The ordinance makes a provision for death penalty for the ‘rarest of rare’ category of cases amongst rape cases.

(This is something that the women’s groups and feminist organisations had vehemently argued against, as a matter of principle, also because it is bound to make convictions more difficult, and because it will act as an incentive for some rapists to murder their victims in order to eradicate witnesses and evidence. This is how the government has listened to the expressions of anger. It has acquiesced with bloodlust, which has been consistently played up and exaggerated by a pliant mainstream media and refused to listen either to the JVC or to sane protesting voices.)

The JVC, at the urging of the women’s groups and feminist organizations, had asked for an inclusion of marital rape in the law. This has been rejected in the ordnance. The ordnance and its author, the Government of India, sees no harm in rape as long as the rapist is a husband. Currently, a man can be accused of raping his wife, and punished if found guilty, only when the husband and wife are undergoing a period if judicial separation. The ordinance reportedly increases the quantum of punishment in this specific instance, but still insists that there can be no marital rape when a couple is not judicially separated.

The JVC, at the urging of a majority of the women’s groups and organizations had advised against a ‘gender neutral’ concept of perpetrator in cases of sexual assault, except in situations of custodial rape or violation. This advice has been ignored. It will now be possible for a man to accuse a woman of rape, without any qualification whatsoever.

Again, the JVC had asked for a review of the Armed Forces Special Powers Act (AFSPA) and lifting of the requirement of sanction to prosecute a soldier covered by the AFSPA when there was a complaint by a woman. This recommendation has not been followed. This means that this government wants rape by the Armed Forces in Kashmir and the North East (where the AFSPA currently operates) to continue, as a matter of course. The argument made out for the AFSPA has so far tended to include the claim that soldiers sometimes need to shoot to kill civilians in ‘pre-emptive self-defence’, if they suspect that they may be terrorists or insurgents. Now we know that the government has finally admitted that it thinks that soldiers also need to rape women, in order to defend themselves.

The JVC has recommended removal of the ‘prior sanction for prosecution’ provision which acts as an inhibitor when it comes to filing complaints of rape against people in official positions of authority, especially magistrates and judges. The ordinance rejects this proposal.

The JVC had recommended that there be some responsibility affixed up the chain of command (‘Command Responsibility’) in the case of custodial rape or assault, so as to ensure that officers, particularly in the police and the armed forces take responsibility for the actions of policemen and soldiers under their command. This suggestion too has been rejected.

The JVC had recommended de-criminalising consenting sexual activity by people aged between 16 and 18. This has been rejected by the ordinance. 16 – 18 year olds who enter into any kind of sexual contact with each other by mutual consent will continue to be treated as criminals. Since it is unthinkable that normal, healthy 16 – 18 year olds be uninterested in exploring their sexuality in a consensual, non-exploitative manner, the Government is effectively ensuring that vast numbers of young people will continue to condemned to criminality in its eyes. In doing so, it is listening to Khap panchayats and and moral policing militias, endorsing the repressive, patriarchal codes that imprison the bodies and desires of young people. It is basically constructing a massive bulwark against women’s sexual autonomy, arguing that the 16 year old who experiments sexually, of her own volition be treated as a victim (against her will) and her partner as a criminal, while maintaining simultaneously that the husband who rapes his wife is innocent, and moreover, that the raped wife herself has suffered no harm.

The JVC had even gone into the question of the humiliating and discriminatory medico-legal provision of the ‘two finger test’ recommended its prohibition, as it militates against bodily dignity. The ordinance chooses to ignore this detail.

We know from statements made by Justice Verma himself how casually the government treated the matter of making depositions before the JVC. Responsible officers either did not show up, or sent their underlings, with no clear mandate to make any concrete suggestions. The ministry of home affairs maintained a studied distance from the entire proceedings of the JVC. Clearly, the government set up the JVC as a smokescreen, as a diversionary tactic that could mislead both the committee and civil society in general into believing that it had serious and honourable intentions to address the question of systemic sexual violence. At the same time it went about surreptitiously drafting an ordnance, without any consultation from political parties, civic organisations, feminist and student groups or any other stakeholders. This ordnance, sent under cover of darkness up Raisina Hill for the President to sign is the measure of how deep the disconnect between those who rule and the young people on the streets is. If the state believes that this will be resolved by subterfuge and chicanery of this order it is very badly mistaken. The anger on the streets is not going to die down. The protestors are unlikely to fade away into the fog.

At even a cursory glance, it is clear that the ordinance being sent to the President to sign is actually a substantively misogynist and insensitive response to the demands made by the protestors. It betrays the trust and hope that any young women and men may have had that the government would be caring and sensitive to their concerns.

If this ordinance, which is a sort of emergency proclamation against women in this country, and an explicit act of contempt against the JVC’s hard work, is not returned to the cabinet and signed by the President instead, we will come to know where the son of the president gets his share of misogyny from. He gets it in inheritance.

If this ordinance is not rejected outright by every political party and leader in parliament, we will know whom to call the Zinda Lash (the living dead).

If this ordinance eventually becomes law, we will know that the government and the political establishment, cutting right across from the ruling party to the parliamentary opposition feels nothing but contempt for the desire and demand for Freedom from Fear (Bekhauf Azaadi) that so many young women and men marched for on Republic Day in Delhi.

We will know that this republic will have betrayed its citizens, yet again.

Once come to know this, the question to ask will be, what happens next? How do we begin taking apart this citadel of fear? Which street, which crossroads, will the protests occupy now? What ways will we evolve to challenge the republic of rape? 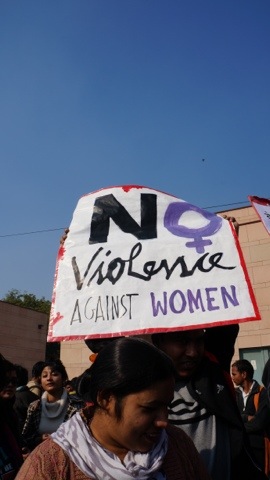 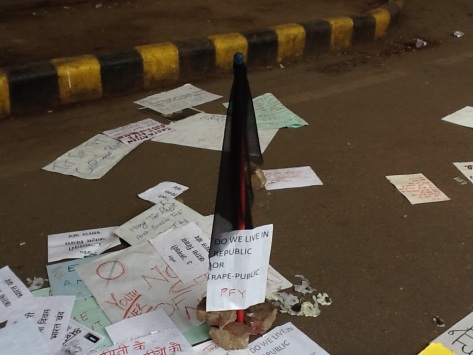 6 thoughts on “Water Cannons, Tear Gas, Ordinance: How the State Responds to Protests Against Rape and the Justice Verma Committee”