Rejoice, fellow Indians. Ajmal Kasab has been hanged. But please excuse me, I am not joining you. Your cheering and hooting and hurrahs feel like a medieval lynch mob celebrating the death of the sinner and not the sin. Barbaric is the word that comes to mind.

This isn’t merely about the morality or aesthetic of capital punishment. I want to ask you: what did we just achieve? Ten terrorists had come to kill and be killed, to cause maximum damage of the sort that they surely knew they’d be killed. Nine of them were killed in direct encounter. Did we hail their deaths? Do we say their deaths were justice? So if we killed Ajmal Kasab four years later- “with due process” – what exactly have we achieved? END_OF_DOCUMENT_TOKEN_TO_BE_REPLACED

While the media has reported most families of those who died in 26/11 as hailing the execution of Ajmal Kasab, Bollywood actor Ashish Chowdhry refuses to be one of them. His sister Monica and her husband were amongst those who were killed at the Oberoi trident hotel. Given below are screenshots of Chowdhary’s tweets. Read from the last tweet upwards. END_OF_DOCUMENT_TOKEN_TO_BE_REPLACED

It is only the rarest of rare crimes that shock the collective conscience of society and are truly unpardonable that are given the death sentence. In our constitutional scheme, it is therefore only persons committing such crimes that are eligible for mercy and pardon. If they are to be excluded from the ambit of mercy by the mere fact of having committed truly unpardonable crimes, the President’s power of mercy has no meaning. Paradoxically, the very fact that Kasab had indeed committed an unpardonable crime is what renders him eligible for mercy. END_OF_DOCUMENT_TOKEN_TO_BE_REPLACED 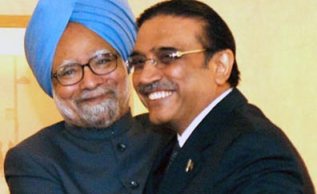 Dr Manmohan Singh is the longest serving Indian prime minister since Jawaharlal Nehru, but history will perhaps note more pertinently that he was the most discredited and unpopular prime minister since Chandra Shekhar Singh, who was in office for a mere eight months. So spectacularly disastrous has his second term in power been that the speed of political crises he battles is now more than one a week. Few will be able to count a single achievement of UPA-2.

And yet there is one achievement, and that is his handling of Pakistan.

The Indian home secretary was returning from a very positive visit to Pakistan when 26/11 happened. The 2008 terrorist attacks in Mumbai shocked not just India but the world. They were not like the bomb blasts we have become accustomed to; their impact was much more than 166 lives. They held India’s commercial capital hostage. They were an act of war and few even in Pakistan pretend that those attacks did not originate from Pakistani soil, across the Arabian Sea. Few in India buy the theory that state actors in Pakistan were not involved. END_OF_DOCUMENT_TOKEN_TO_BE_REPLACED

The Naroda Patiya massacre in Ahemdabad on 28 February 2002 killed 97 Muslims. It is the massacre infamous for the gory stories of a pregnant woman disemboweled and raped, a 20 day child killed, and so on. If this massacre is not fit to be considered “rarest of the rare,” what is?

It is ironical that the court found the kingpin of the massacre to be a woman, Dr Maya Kodnani, a practicing gynaecologist, a former Minister of State for Women and Child Welfare in the Narendra Modi government! The court came down particularly hard on her, commenting that as a legislator, a representative of the people she had done the opposite of what she was expected to: she helped kill people rather than save them. “She led the mob and incited them to violence. She abetted and supported the violent mob,” the court observed.

However, special court judge Jyotsna Yagnik chose not to sentence the accused to death when he announced the sentencing on 1 September. Her court found 32 people guilty, of whom one is absconding. 7 will spend 31 years in jail, 22 will spend 24 years, Maya Kodnani 28 years and former Gujarat state Bajrang Dal president Babu Bajrangi is to live the rest of his life in jail. END_OF_DOCUMENT_TOKEN_TO_BE_REPLACED