North East Students’ Forum JNU organized a protest march on May 4, demanding strong action against teachers who are involved in preparing the “internal dossier”. The dossier was also burnt by NESF at Administration Block – Freedom Square – JNU.

Some images from the march 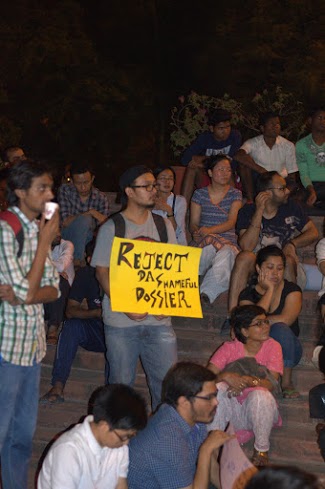 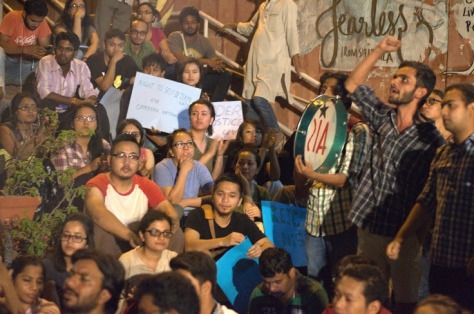 [ The prurient fantasies contained in the ‘JNU Dossier’, produced by some right wing faculty members of JNU in or around October 2015, have been ‘outed’ by an excellent report by Ajoy Ashirwad Mahaprashasta in Wire.org. This comes exactly at the time when the JNU administration has shown its fangs by delivering a low blow by way of the measures outlined in the report of the ‘High Level Enquiry Committee’ appointed by the Vice Chancellor. An impartial examination of the HLEC document and the ‘Dossier’ in will reveal some startlingly resonant patterns. Clearly, the ‘Dossier’, which had been dismissed by the former Vice-Chanceller, Prof. Sopory, has been reincarnated at the express orders of the Nagpuri masters of the present dispensation. We are sharing below an excellent response to the ‘Dossier’ by Ayesha Kidwai, one of the professors – ‘named’ in the dossier. This is taken from Ayesha Kidwai’s status update on her Facebook Page.

For another take down of the ‘Dossier’ – see also – “Sex and sedition: What the JNU dossier tells us about the right-wing imagination” – in Scroll.in by Kavita Krishnan. Meanwhile, JNU Students have commenced on a ‘fast unto death’ in protest against the university administration’s senseless measures. Kafila]

Sanghi smut is in season again! For the authors of the Dirty Dossier, JNU nights are forever scented with musk, with couples draped on every bush, suitably fortified by free alcohol, thoughts of secession, and cash payments supplied by the Awesome Foursome. At its peak, the party can practically involve the whole university, because as per Shri Gyan Dev Ahuja’s estimates, the number of students frolicking this will be 7000 (3000 condom users X 2, plus 500 injectable walas X 2). (Assuming of course that the few hundred left over have gone to fieldwork, have exams, or are abstemious and/or abstinent in nature.)

Laugh as we may (and must) at these feverish imaginings, it’s also important to understand that the very notion of a free university challenges not only misogyny, but also the social apartheid produced by caste and exclusionary religion.