The discovery of nuclear energy or radioactivity in 1930s and 1940s by the scientists in a sense murdered the true spirit of science. After the bombings by the United States over Japan in 1945, physicists and nuclear scientists practically got to know about the massive amount of energy a nuclear explosion can release. At around the same time, scientists started experimenting to harness nuclear energy for generating electricity as well. However, after the destruction caused by atomic explosions in Japan, Albert Einstein changed his stance towards using nuclear energy after witnessing the horrifying episode in human history. Along with him, many other nuclear scientists and bomb designers like Ted Taylor, John Gofman, Michio Kaku turned anti-nuclear activists after studying about the harmful effects nuclear radiation can cause.

Kennette Benedict, a senior advisor to Bulletin of the Atomic Scientists argued that the three communities which benefit by supporting nuclear warheads are “weapons scientists and engineers, private military contractors, and the government nuclear weapon bureaucracy.” Some realists and neo-realists like Hans Morgenthau (Politics Among Nations), Kenneth Waltz (Theory of International Politics) and John Mearsheimer (The Tragedy of Great Power Politics) championed the deterrence theory for avoiding major wars. Surprisingly, the nuclear hawks feel proud of their nuclear achievements and development, despite the fact that nukes failed to provide them with total security and also that nuclear energy is not a cheap source for generating electricity as reported by physicist, M. V. Ramana in his book The Power of Promise.  END_OF_DOCUMENT_TOKEN_TO_BE_REPLACED 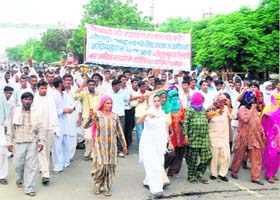 Farmers of Gorakhpur village hold a protest in Fatehabad against acquisition of their agricultural land by the Haryana government for a nuclear power plant in the area, August 2010. (The Tribune on-line)

It was with gravest concern and misgivings that we heard of Section 9 of the Land Acquisition Act, 1894, being issued in Fatehabad, Haryana, to forcibly acquire land for the proposed Gorakhpur Nuclear Power Plant Project. This action by the Harayana State Govt. is completely unacceptable on the following two counts:

Farmers of Gorakhpur and nearby villages have been sitting in continuous opposition to the proposed nuclear power plant from August 2010. They are fighting for their right to life, livelihood and to safeguarding their fertile and irrigated, three-crop land, all of which will be severely threatened if the project were passed. The fact that a community is in such a long drawn and strong opposition to this project, is of crucial concern and cannot be ignored arbitrarily or repressed in democracy. END_OF_DOCUMENT_TOKEN_TO_BE_REPLACED 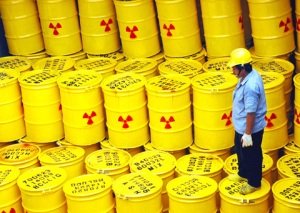 Steel drums with nuclear waste. The inescapable byproduct generated from the fission of nuclear fuel in the form of uranium or plutonium creates what is called nuclear waste. This waste comes in a huge variety of extremely radioactive material with half-lives ranging from 8 days to hundreds of thousands of years. In other words their radioactivity takes a really, really long time to decay, thousands of times our human life-times. These fission products if released to the environment will last a long time, and it is almost impossible to decontaminate them.

NITYANAND JAYARAMAN and G. SUNDAR RAJAN of the Chennai Solidarity Group for Koodankulam Struggle developed  the  fact-sheet below in response to real questions that they encountered during the course of street and college campaigns. They say: “The questions were sincere, so we felt a sincere response was warranted.”

END_OF_DOCUMENT_TOKEN_TO_BE_REPLACED

Dr. SURENDRA GADEKAR is a well-published physicist of international renown, and a Gandhian. After an MSc and PhD (in theoretical physics) in 1979 from IIT Kanpur, he worked for two years as a post-doctoral fellow at Iowa State University, US and then two years as a research associate at IISc in Bangalore. He resigned in 1986 (a little before Chernobyl) to do antinuclear work when the Kakrapar Nuclear Power Plant was started. In 1987, he started Anumukti A Journal Devoted to Non-Nuclear India, and has carried out and published studies of the impact of nuclear energy around the plants at Kakrapar, Rawatbata and Jadugoda.  He has also carried out a study at Pokharan, which is as yet unpublished. Dr Gadekar’s response follows:

Although most of what they write is irrelevant to their topic and the rest just plain wrong,‭ ‬the very fact that the establishment has to bring out its‭ ‬‘Big Guns‭’‬ to answer the questions raised by the Koodankulam movement,‭ ‬is a testimony to the success of the movement.

Originally I had intended to write a point by point refutation of their article,‭ ‬but I have been deterred by the sheer length of the article.‭ ‬What I intend to do here instead is to paraphrase their points and answer them one by one.‭ ‬I would urge activists to visit the Hindu website at and to read the article in the full. I make this request specially so that friends can point out if I have been unfair in summarizing their work or have missed something important.

END_OF_DOCUMENT_TOKEN_TO_BE_REPLACED

We are residents and organisations from Japan, and are intimately aware of the unpredictability and uncontrollable nature of nuclear power. We are the unfortunate witnesses of two nuclear holocausts.  It is with pain that we see the Indian Government pursuing a dangerous path of constructing large nuclear power plants within even larger nuclear “parks” where power generation capacities are pegged at up to 10,000 MW.

END_OF_DOCUMENT_TOKEN_TO_BE_REPLACED

Mandi House to Parliament. Assemble in front  of the Sahitya Academy Lawns at 12.00 noon.

This protest march is to state our stand that we oppose all  forms of nuclearisation of India, including nuclear (fission) power and weaponisation plans and programmes.

We further demand an immediate moratorium on all new projects, and a stringent review of existing plants by independent experts.

We demand investment in exploring sustainable alternative forms of energy.

END_OF_DOCUMENT_TOKEN_TO_BE_REPLACED

As the Japanese nuclear disaster stares the world in its face, the unrepentant power elite and the nuclear elite in particular, is attempting to downplay the threats that are in store for us in future. An particularly belligerent representative of the Indian nuclear establishment recently attacked CNDP (Coalition for Nuclear Disarmament and Peace) activist Praful Bidwai on television, calling him a ‘nuclear illiterate’.  While the world watches in horror, predators are active in stepping up their disinformation campaign. Given that India’s record of maintaining minimum safety standards on even the simplest of things is not a patch on the Japanese (leaving aside its world record in corruption!), there is no other way but to demand an immediate moratorium on all further nuclear activity in India. The anti-nuclear movement has raised this demand already in relation to Jaitapur and Haripur in West Bengal.

Meanwhile, here is Praful Bidwai on the Jaitapur project, after his return form a field investigation.

It is the Indian left’s concurrence, rather than its disagreement, with the idea of a nuclear future (including nuclear weapons) that has made its case weak and inaudible to the larger masses.

In a charged atmosphere produced by the backers and opponents of the deal both pitching their positions in terms of ‘national interests’, it would be necessary not to lose sight of its broader meanings and implications.

In its essence, the deal is about opening up of the restrictions over nuclear commerce put on India after its 1974 ‘peaceful nuclear tests’. Though initiated and facilitated by the United States, this move will provide India access to international markets in nuclear fuel, material and technology, in accordance to the safeguards and guidelines of the IAEA and the Nuclear Suppliers Group (NSG). While it would imply huge imports from the US, the deal also removes international fetters on nuclear trade with other countries including Russia, China, France and Australia whose corporations would get major business orders from India once the deal comes into effect.