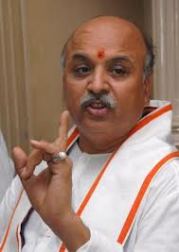 Mr Praveen Togadia, the international secretary general of VHP (Vishwa Hindu Parishad) is sitting pretty. It has been more than a week that a FIR has been filed against him for his alleged hatespeech in Bhokar town but since then there has been no progress. END_OF_DOCUMENT_TOKEN_TO_BE_REPLACED

Of course, in emergency situations, schools even metamorphose into shelter homes for the victims of a natural calamity or a social catastrophe.

But certainly, no sane person can imagine that school premises can ever be used for worshipping deadly weapons – loaded pistols and illegal rifles. But it appears that on this count RSS – the all hindu male organisation – thinks differently. It is not for nothing that schools which run under the aegis of its affiliated organisation are freely handed over for such programmes under the specious reason that it is a religious programme. Any close watcher of the ground level situation can vouch that worshipping of weapons on Dusshera has nothing to with religion rather it is part of social tradition. Despite this reality organising of ‘shastra pujas’ has of late become a national phenomenon and hindutva organisations are known to play an important role in it. It serves a double purpose for them : consolidate their constituency by using religion as the legitimising force, terrorising the ‘others’ simply by taking out ‘religious processions’ brandishing weapons.