ABVP ARE THE FOOT-SOLDIERS OF THIS FASCIST GOVERNMENT WHO ORCHESTRATED THE ATTACK ON JNU POST 9TH FEB LAST YEAR!

APPEAL TO EVERYONE TO REJECT AND ISOLATE THE KILLERS OF ROHITH AND THOSE WHO ORCHESTRATED THE #SHUTDOWNJNU CAMPAIGN!

As JNU is still recovering from the aftershocks of last year sangh parivar’s attack on our university post 9th of February we are again facing an unprecedented attack on our university – its democratic space, progressive admission policy, its inclusive character. The latter has been the heart and soul of JNU which the student movement has built over the last four decades. Last year’s attack was an attack on our right to dissent, to curb our democratic spaces and to implement the fascist Hindutva agenda on our universities. This year, in the name of “academic quality” and “excellence”, by reducing the seat intake & closing admission they want to ensure that none is able to access higher education in JNU.

We were members of ABVP previous to the events of Feb 9 last year, and we subsequently resigned because of our differences with this fascist, casteist, Brahmanical and patriarchal organisation. These differences, as we have earlier said, had been long standing ones. But after the orchestrated attack on JNU, we felt a limit had been crossed and we could no longer associate with ABVP. END_OF_DOCUMENT_TOKEN_TO_BE_REPLACED

This is the first of a five part series in which AYESHA KIDWAI will explain how the UGC Gazette Notification of 2016, especially as interpreted by the VC of JNU, will affect different categories of students, faculty, and the general public. 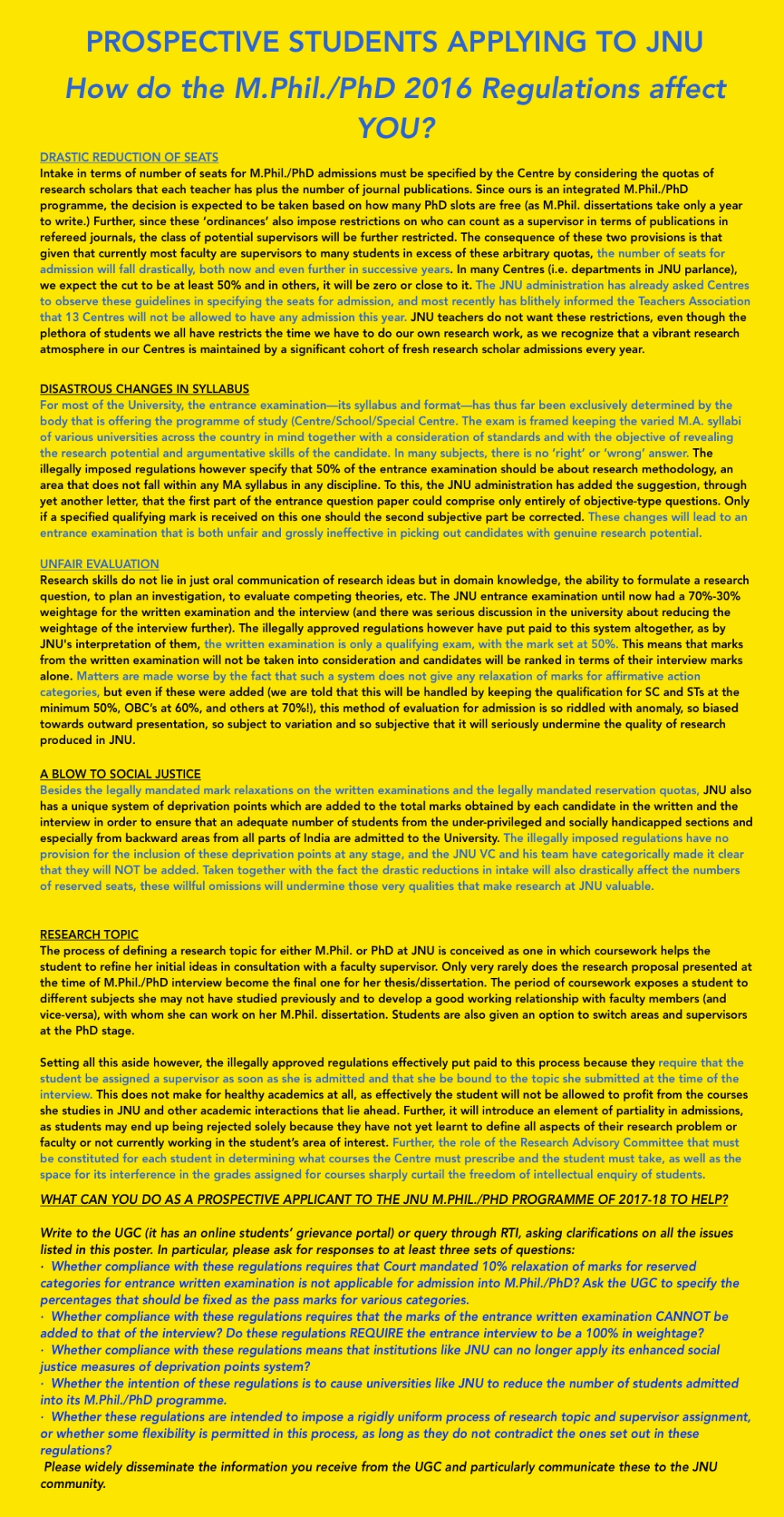 This is a guest post by RINA RAMDEV AND DEBADITYA BHATTACHARYA

The much-debated API (Academic Performance Indicator) system, linking promotions of faculty members in Indian universities/colleges to a quantifiable assessment of their performance, was introduced by the University Grants Commission (UGC) in its 2010 Regulations. Since then, there has been mounting resistance and discontent among massive sections of the teaching community – forcing the UGC to withdraw the said assessment framework for a while in 2013, before reintroducing it across institutions of higher education. However, over the years, the ire of protesting teachers has translated into a sustained critique of the API system and its failure to account for the infrastructural inadequacies of public institutions as adversely impacting the promotion prospects of thousands of teachers across the country.

It was rightly argued that a point-based appraisal pattern reduces teaching as an adventure of ideas into a standardised set of visible-verifiable outcomes and deliverables, expending in this, the necessary surplus of every academic encounter. The clock-timed hours of classroom-teaching – convertible into digits and decimals – were not only incommensurate to the disaggregation of thought beyond workdays and work-hours, but also insisted on a corporate-model professionalism limiting the exact interface between the teacher[-as-service-provider] and the student[-as-client].

The perils of quantification notwithstanding, the API system practically sought to make teaching a redundant exercise in terms of ‘necessary qualifications’ for faculty promotions. With a lucrative price-tagging of the ‘value’ of research activities conducted by individual teachers outside of teaching-schedules and the consequent structures of waging intellectual productivity through the numbers of projects and publications, the API contributed to a voiding of the classroom in undergraduate colleges in many parts of the country. Forced to prove her/his levels of productivity as the most essential claim to survival and growth within the field, the teacher needed but little to do by way of engaging students. And yet, on the contrary, the government persisted with its policy of withdrawing research grants and forcing research organisations to look for alternative sources of funding to sustain their work. Consequently, teachers have been infrastructurally forced into producing dubious research in the cause of ‘career advancement’, self-funding their way into business-rackets parading as scholarly platforms.