February gives way to March and spring returns to Delhi. And what a spring it is. The right wing thugs of the ABVP choose the wrong time to attack, once again. They must really get themselves a better astrologer, or at least a better class of charlatan who can tell them if there ever is a right time to stage their goon show. I suspect there isn’t.

The right wing thugs of the ABVP choose the wrong time to attack, once again. They must really get themselves a better astrologer, or at least a better class of charlatan who can tell them if there ever is a right time to stage their goon show. I suspect there isn’t.

A panic stricken, stupid regime and its thugs make a series of wrong moves. They throw stones at seminars, they hide behind a police baton charge, they unleash television vampires and an army of zombie-trolls on the smartest and sassiest of rebels who can think on their feet faster than they can type a hashtag. The regime might think they are winning the battle of images, but they are certainly losing the war of perception and ideas. The RSS lounge lizard Rakesh Sinha walks out of the NDTV studio because he cannot take Shehla Rashid of the AISA showing him the stone that some ABVP thug threw at her and missed. She calls him out for what he is, ‘a shameless liar’. He loses it. Completely. 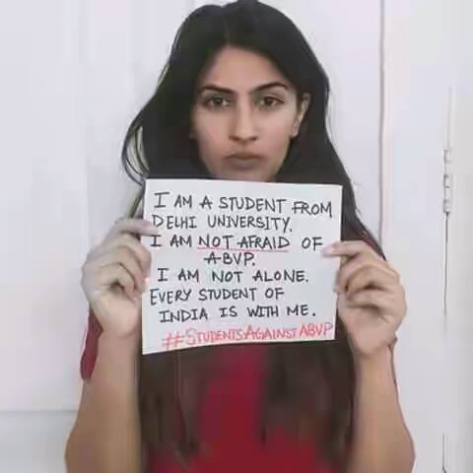 Kiren Rijiju, an idiot with the day job of a cabinet minister trolls GurMehar Kaur, a twenty year old woman student who says she has had enough of right wing aggression. The hirelings of the regime he represents hold out rape threats to her because she said the simple truth about war. A generation of young people answers back, in resonance with GurMehar. “I am not Afraid of ABVP” they say. A storm breaks on twitter. A wave breaks on the streets.  “All changed, changed utterly: A terrible beauty is born.”

A march rolls out in Delhi University. More than five thousand students, accompanied by their teachers, take back the campus.

Abinash DC, a second year undergraduate student of Ramjas College talks about the situation in the aftermath of the ABVP attack on the seminar in Ramjas on the 21st of February.

The next day, the ABVP brings in a few busloads from Agra to Delhi University to muster a decent number, but doesn’t quite make it. The march against Azadi/Freedom (and therefore, in support of Ghulami or Slavery) is just about half a march.  The ABVP’s claims about how many people were at the march are about as good as their master’s declarations about the GDP. ‘Teri Game Hai Over, Teri baj gayi Seeti’.

Their slogans are dull. Their chants have no riddim. Their eyes are vacant. Their minds are empty. They cover their shame with flag that is also their shroud. They hold up posters which whine about the presence of Urdu posters in the students protests. As if Urdu was not a beautiful language but an epidemic, or a time bomb. They gift us their very own flamboyant stupidity. 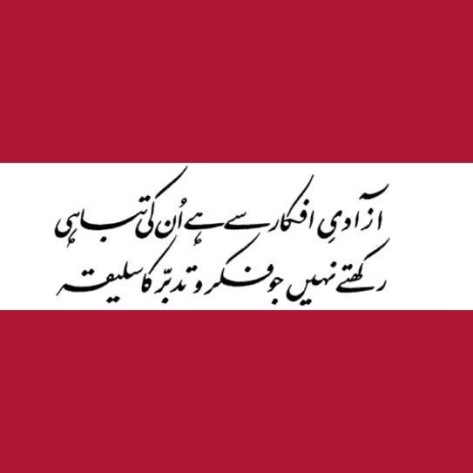 Freedom of Thought Destroys Those Who Can’t Think

To make up for what it doesn’t have in living bodies, the ABVP brandishes death, unrolling some metres of slasher-porn flex hoardings in Delhi university to show the corpses of their Kerala dead. They conveniently forget to show the pictures of the equal numbers that they have killed. Like the zen Kaoan of the sound of one hand clapping, this is the roar of one machete, hacking away at its own meanignlessness. The shakha is broken.

Elsewhere, a pracharak raises the stakes, tells the truth about how they organized the Gujarat pogrom, promises a garland of three hundred thousand leftist skulls to his dearly beloved Mother India. And so it goes, on and on.

In the right, left, right, left syncopation of marches and counter marches, the right has neither numbers, nor colour, nor vigour, nor imagination. It has hoarse voices, tired ideas, cliches and jaws stretched wide open in impotent rage. On the other hand, in the walking assemblies of ‘anti-nationals’ there is music, there is dancing, there is laughter, there are smiles, there is gentleness and exuberance. There is also disagreement. Not everyone is aligned with the ‘left’. Not everyone is a card carrying cadre. The vast majority are what Anirban Bhattacharya of BASO in a short address on the ‘Save DU from Gundagardi’ march  called ‘the extraordinary student, the common student mistakenly called the ordinary student’. Many of them are in their first year of university. This is their political baptism. The Modi regime has once again invented for itself a generation of lifelong adversaries.

Four days after the march in the university, a call is given for a citizens march in the city. People gather into an edge of the Mandi House circle. Will the numbers hold? At first there is a trickle of the old, as befits those who have been ‘citizens’ for a while, and then, suddenly, there is a flood of the young.

It begins with song. Shehla Rashid sings, ‘they don’t let us sing’ – ‘voh hamare geet’ . Nivedita Menon insists ‘we are the mainstream, they are the fringe, this is Azadi’.

The crowd swells. People begin spelling words for love, freedom, dissent on the streets. There is the sudden appearance of signs in Urdu, most prominently, a distributed cluster of Xeroxed A4 sheets that carry a fragment of Iqbal. ‘Freedom of Thought Destroys Those Who Can’t Think’. 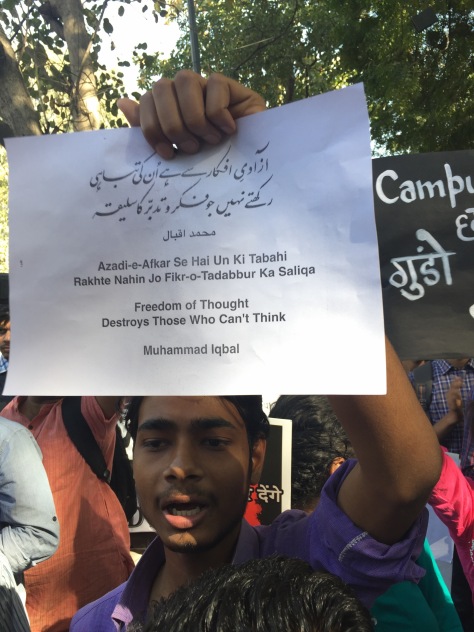 Kawalpreet Kaur, a bundle of raw energy, leads from the front, along with a phalanx of other bright eyes and raised hands. “Throw the ABVP Out” she says, and when I hear her, it makes me think their ‘game is over’, their ‘khel is khatam’, ‘unki baj gayee seeti’.

The walk begins. The sun shines bright on Azadi. Venkaiah Naidu wants to amend the Sedition Law to punish any declaration of Azadi. If he means what he says he will have to arrest the gentle sunshine of a Delhi spring.

At Parliament Street, there is the anticipated barricade. The familiar police station. The happy tea vendors. And a motley gathering.

The missing Najeeb Ahmed’s mother and cousin sister sit next to Jignesh Mevani, the embodiment of Dalit resistance in Gujarat, who sits next to undergraduate students from Ramjas College.

There are many new triangulations. Kavita Krishnan speaks about how the ABVP threatens every student. Umar Khalid, who was silenced in Ramjas College, speaks with extraordinary clarity.

Jignesh calls Shehla, Umar, Kanhaiya and GurMehar his heroes. This doesn’t surprise us. Everyone knows that this is not just  about Shehla, Umar, Kanhaiya or GurMehar. Every student, every young person  here is a hero, and that this is a simple, ordinary fact. Jignesh says what is obvious and magical at the same time. When the Dalit, the Peasant, the Worker, the Muslim, the person who brings with her the history of an oppressed people, stand together, then power knows its game is up. Fuck and forget the suits on TV if they don’t get it. We do.

“We are all changed, changed utterly; a terrible beauty is born”.

Take a sleeping pill Mr. Modi. It might help you through tonight, and from now on, every other night.

3 thoughts on “A Tale of Two and a Half Marches – Two for Azadi and a Half for Ghulami.”